Putin’s complaints overlook the real cause of tensions in the region: His invasion of Ukraine. 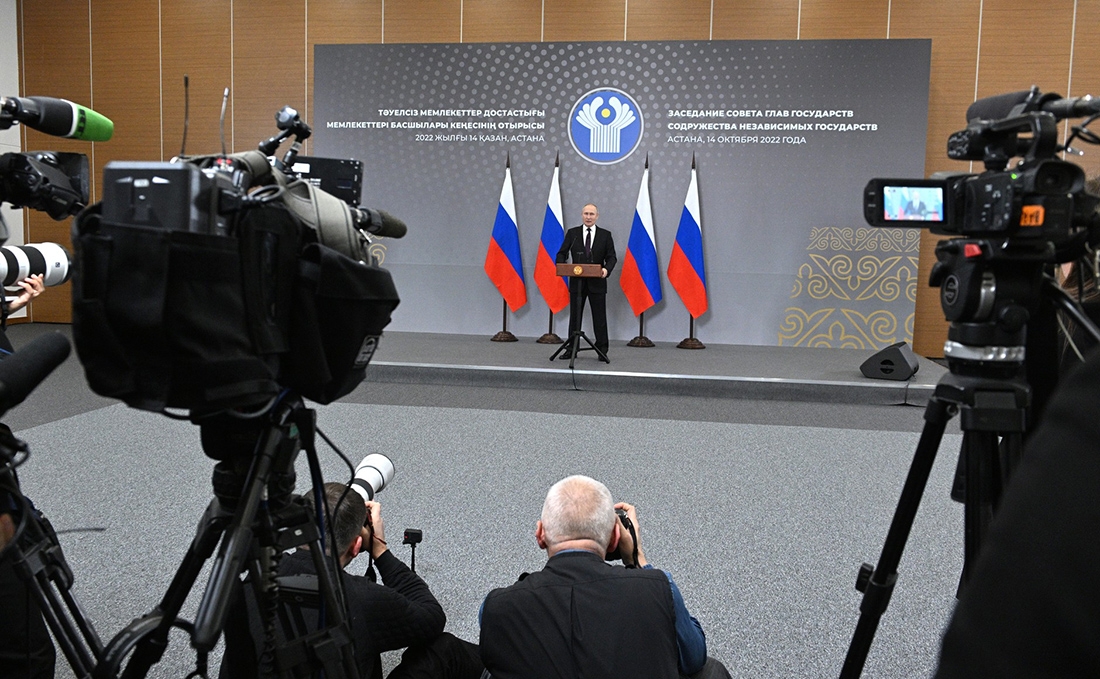 Not exactly a unifying force (Kremlin.ru)

If there are any tensions in relations between a bellicose Russia which has invaded its neighbor and its former colonies in Central Asia, outsiders are to blame for stirring them up.

That, at least, was the message delivered by Russian President Vladimir Putin at a summit with Central Asian leaders in Kazakhstan on October 14.

“The situation that has taken shape in the world and in the region encourages the activation of all mechanisms of cooperation between us,” he told the presidents of Kazakhstan, Kyrgyzstan, Tajikistan, Turkmenistan and Uzbekistan.

There were “attempts from the outside to hamper the development of our cooperation in many areas, to destroy the honest links and close cooperation that have taken shape in politics, the economy and the humanitarian sphere throughout the course of history,” Putin griped.

He did not name names, but it was not hard to guess that he had in mind the West, which he presents as the root of most of Russia’s problems.

Putin was speaking after airing one of his conspiracy theories about evil forces scheming against Russia at another international gathering in Astana the previous day. There, he complained of “a self-proclaimed so-called Golden Billion, which has locked in for itself all flows of capital and technologies, to live to a significant degree at the expense of others.”

The “Golden Billion” is a three-decade old, Russian-invented conspiracy about foreigners scheming to rob the world and destroy Russia.

Putin’s complaints about outsiders fomenting trouble in Russo-Central Asian relations are at odds with evidence that what is causing tensions is his invasion of Ukraine.

Russia’s Central Asian partners have broadly distanced themselves from the war, while refraining from direct criticism of Russia’s aggression.

Kazakhstan, in particular, has faced a barrage of aggressive rhetoric from Russian nationalists voicing territorial claims against it over perceptions that it is being disloyal by not supporting Moscow.

That has included stating that Astana will not recognize referendums in Ukrainian territories that effectively led to their annexation by Russia, and making it clear that it will not assist sanctions-busting.

The Kremlin has only itself to blame for shifting alliances with once close partners. But that is unlikely to stop it imagining sinister outside forces hellbent on doing Russia down