Some $27 billion worth of commercial deals were signed during his visit to Tashkent. 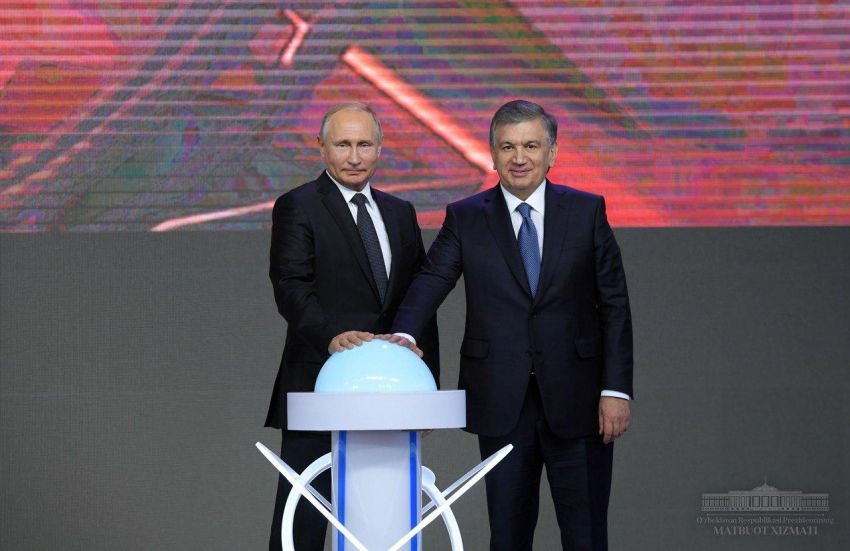 Russian President Vladimir Putin was accompanied by a colossal retinue on his visit to Uzbekistan last week — as sure a sign as any that Moscow is going to fight hard to keep Tashkent in its corner in the face of U.S. courting.

Hundreds of people, including businessmen, regional officials and educational leaders, traveled with the Russian leader for his October 18-19 stay. Once all the dust had settled, representatives from the two nations had signed $27 billion in commercial details, while Putin and his Uzbek counterpart Shavkat Mirziyoyev fired the starting pistol on a nuclear power plant, the first that will appear in Central Asia.

“We have never seen anything like it before”: The phrase was heard a few times from both Putin and Mirziyoyev.

To convey a sense of scale, one senior Russian official offered a comparison with the annual event to advance cooperation with Kazakhstan, a direct neighbor with which Moscow has enjoyed warm relations for decades.

“The Russian delegation alone comprised 1,200 people, which is twice as big as what we saw at the last Russia-Kazakhstan forum,” Economic Development Minister Maksim Oreshkin.

Mirziyoyev began breaking the rules even before Putin touched Uzbek soil as he went to the airport in person to meet the Russian leader on the landing strip. Video footage of the late-night motorcade into Tashkent showed a line of around 100 cars driving through the city.

In a supercharged variation of a time-tested format, entrepreneurs and regional officials from the two countries held talks at the inaugural Uzbek-Russia interregional forum in parallel with the presidents chinwagging.

The multibillion-dollar deals came courtesy of 800 or so agreements. The size of the amount is significant as it outstrips a record set by China, which has nudged out Russia as Uzbekistan’s trading partner number one in recent years. When Mirziyoyev went to China in May 2017, the total value of commercial deals signed was $23 billion.

Mirziyoyev is glowing with optimism.

“This year, according to our estimates, trade turnover will reach $6 billion. This exceeds our forecasts. The goal for the coming years is to increase this figure to $10 billion,” he said.

Putin supported his colleague with applause and, by way of an example area for joint effort, he suggested that Uzbek manufacturers could produce weapons.

He did not specify to what kind of weaponry he was alluding, however. In Soviet times and in the early 1990s, the Tashkent Aircraft Production Corporation produced Ilyushin-76 military cargo planes. But the late President Islam Karimov put a stop to that.

“The most we can expect in the coming years is the production of helicopters, bullets and doing repairs on tanks,” political analyst Bakhtiyor Ergashev told Eurasianet.

Education was another breakthrough area, with Russian universities finally committing to establish themselves in the Uzbek education market. Leading representatives from 80 Russian universities traveled with the delegation. Uzbekistan churns out more than half a million school-leavers every year, and local institutions of further learning are nowhere near equipped to meet demand.

Some 25,000 Uzbek nationals are currently studying in Russian colleges. With this visit generating around 100 agreements between Russian and Uzbek higher-learning institutes, the choice of future university applicants will be broadened.

As previously advertised, the highlight of Putin’s stay was the launch of a project to build an $11 billion nuclear power plant, just east of Bukhara, to be underwritten with Russian loans. During the ceremony, a mega-screen behind Putin and Mirziyoyev showed an array of images of famed Central Asian scientists, such as the founder of modern algebra, Al-Khwarizmi, the 15th century monarch and astronomer Ulugh Beg and the canon-defining physician Avicenna. In its concluding section, the video presentation highlighted Russia’s achievements in nuclear energy. The intention appeared to be that of casting the nations as equal peers in their contributions to scientific progress.

Thousands of kilometers away, on October 18, a much more modest ceremony conveyed other forms of affinity between the two nations — if only in how their governments are given to disregarding public sentiment.

To a notably meager attendance, a statue of the late president, Karimov, was unveiled in Moscow.

The creation of the monument was entrusted to British sculptor Paul Day. The three-meter statue of the late president was placed against a backdrop of Samarkand’s Registan square and was flanked by leaning chinars, Uzbek sycamores.

The project, which was funded by Lola Karimova, the late president’s youngest daughter, has been viewed with undisguised disgust by many liberal-minded Muscovites.

“In Moscow, they believe Karimov was a Russophobe who destroyed Russian culture and that Russians were discriminated against in Uzbekistan,” said Bakhtiyor Djalilov, an Uzbek journalist who works in Moscow.

RFE/RL reporter Umid Bobomatov, who attending the unveiling, said the ceremony was prepared under a cloak of secrecy. Only around 15 people attended.

“The only people cheered by the monument were Moscow and Uzbek officials, and also labor migrants working in Moscow. They cried and prayed next to the statue,” Bobomatov told Eurasianet.

“What caught my eye were the wonderful chinar, through which a light descends from a peaceful sky,” she wrote. “You can even greet him (Karimov). Wonderful! Very conceptual, honest, sincere.”

If it looks like Russia is making an extra effort to add vigor to its ties with Uzbekistan, it may be in part that it has sees Tashkent becoming ever more eager to cultivate its friendship with the United States. State media in Uzbekistan were cock-a-hoop when Mirziyoyev met with US President Donald Trump at the White House in May.

Unlike in an earlier time, however, Uzbekistan seems intent to show it is no longer interested in exclusive relationships. In a working meeting that may or may not have been intentionally timed to follow Putin's departure, Mirziyoyev met on October 22 with a delegation from the American-Uzbekistan Chamber of Commerce. The delegation is in Tashkent to attend a week of events to showcase U.S. investment in Uzbekistan. Among companies represented are General Electric, Boeing, CNH Industrial, John Deere, Honeywell and White & Case.

"Since the start of this year, 25 new enterprises have been created in this country with the involvement of American investment. The volume of bilateral trade has doubled," the presidential administration said in a statement on its website.

As far as foreign money goes, Uzbekistan is operating under the principle of "come one, come all."