The Chinese president was undoubtedly the most powerful man in the room. 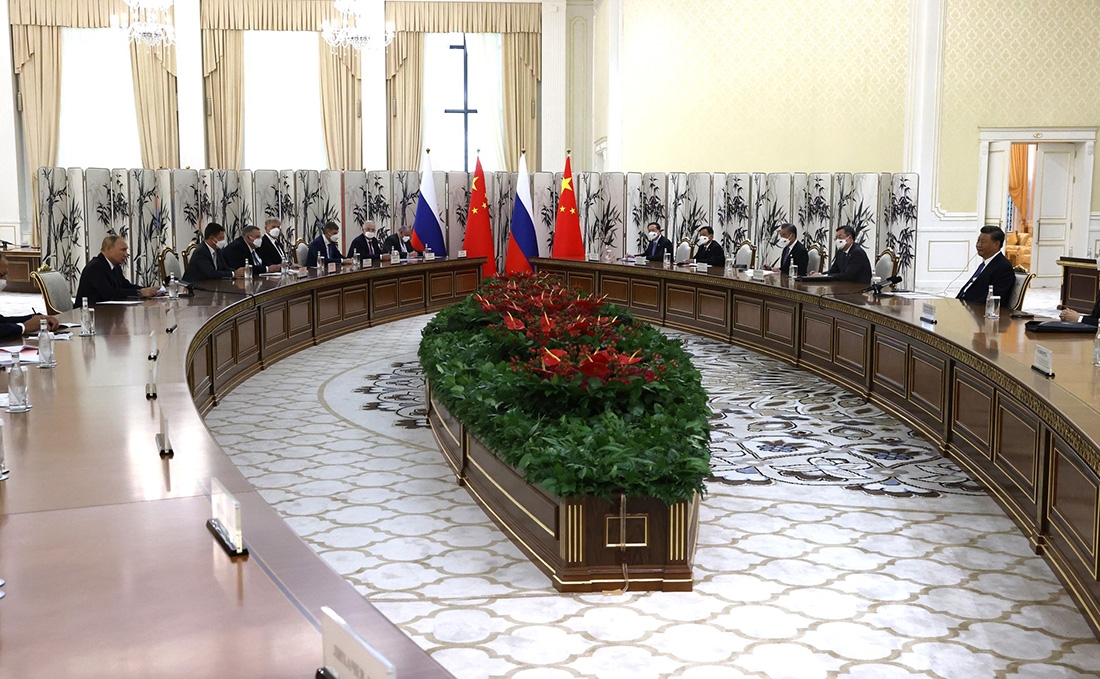 RIP partnership of equals: The two leaders spoke across a coffin-like centerpiece in Samarkand on September 15. (Kremlin.ru)

Reeling from a series of defeats in Ukraine, Russian President Vladimir Putin made a rare admission that there might be some international concerns about his country’s invasion of a neighboring state.

He was deferring not, of course, to Western concerns but to those that might be harbored by his ally China, whose support he needs to refute claims that Russia is internationally isolated.

Putin made the concession at a face-to-face meeting with Chinese President Xi Jinping in Uzbekistan. The two are in Samarkand to attend a summit of the Shanghai Cooperation Organization (SCO) on September 16.

“We highly value the balanced position of our Chinese friends in connection with the Ukraine crisis,” Putin told Xi, according to a readout of the September 15 meeting published by the Kremlin.

“We understand your questions and concerns on this account. During today's meeting we will, of course, also explain our position on this matter, although we have previously talked about this.”

China has not condemned Moscow’s aggression in Ukraine, but has blamed the West for stoking tensions. However, it has not provided any sanctions relief to Russia, either.

Putin also railed against “provocations by the U.S. and their satellites in the Taiwan Strait,” in remarks guaranteed to please his Chinese counterpart.

By contrast, the previous day Xi had appeared to deliver a shot across the bow to Moscow during a visit to Kazakhstan, where he warned that China would not tolerate any encroachment on that country’s sovereignty or territorial integrity.

Putin went on to express confidence in Moscow’s “strategic all-encompassing partnership” with Beijing, which the two declared had “no limits” when they last met in Beijing in February shortly before Putin ordered Russian troops to invade Ukraine.

Undeterred by international criticism over his war, Putin cast their foreign policy “tandem,” as he put it, as a force for good on the global stage.

“We jointly speak out for the formation of a fair, democratic and multipolar world order, based on international law and the central role of the UN, and not on some rules that someone has invented and tries to impose on others, without even explaining what that is,” he said in a thinly veiled reference to the U.S.

Attempts to create a “unipolar world” – shorthand for one where Washington calls the shots – had “acquired an absolutely monstrous configuration and are absolutely unacceptable to the overwhelming majority of states on the planet.”

Xi was more laconic – at least according to the Kremlin readout, which quoted his remarks in Russian.

In a world undergoing “colossal changes,” China was “ready with our Russian colleagues to show the example of a responsible world power and play a leading role to bring such a fast-changing world onto a trajectory of sustainable and positive development.”

The meeting underlined how keen Putin and Xi are to forge a new world order pivoting away from what they consider Western hegemony.

But it also demonstrated how Putin’s war in Ukraine might put their “no-limits” partnership to the test. It is no longer a partnership of equals.