The statement comes as Prime Minister Nikol Pashinyan is coming under increasing criticism for his handling of the war and ceasefire negotiations. 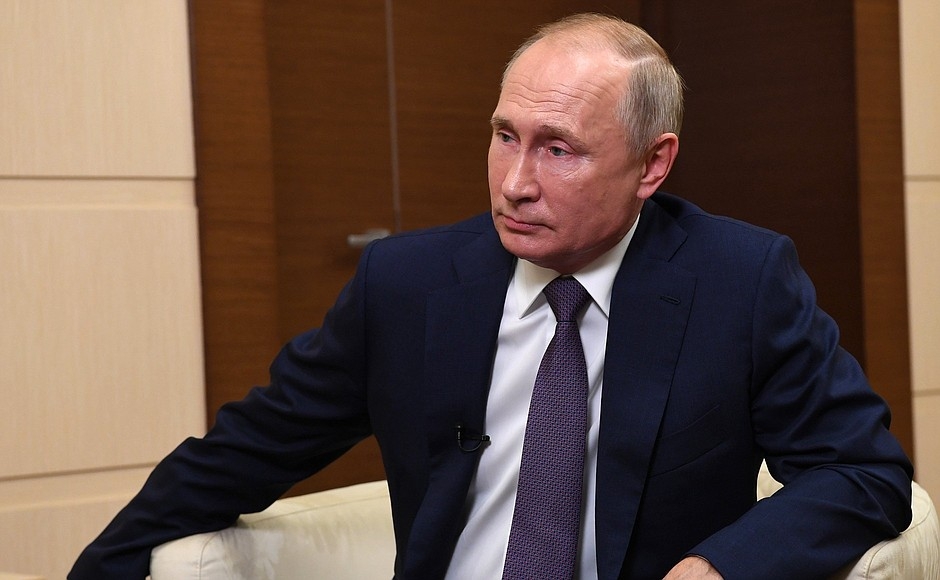 Armenia had the chance to stop the war in mid-October and maintain control of the key city of Shusha, Russian President Vladimir Putin has said.

The remarkable claim is likely to put even more pressure on Armenian Prime Minister Nikol Pashinyan, who is facing the political fight of his life over his handling of the war and his country’s defeat.

In a November 17 interview with Rossiya 24, Putin recalled that he had a series of conversations on October 19 and 20 with Pashinyan and Azerbaijan President Ilham Aliyev.

“On the whole, I managed to convince President Aliyev that it was possible to end hostilities, but the return of refugees, including to Shusha, was a mandatory condition on his part,” Putin said.

Shusha (which Armenians spell Shushi) was Azerbaijan’s key goal in the war; it regards the city as its cultural and historical center in the region.

“Unexpectedly for me, the position of our Armenian partners was that they perceived this as something unacceptable,” Putin continued. “Prime Minister Pashinyan told me openly that he viewed this as a threat to the interests of Armenia and Nagorno-Karabakh. I do not quite understand the essence of this hypothetical threat, I mean, it was about the return of civilians to their homes, while the Armenian side was to have retained control over this section of Nagorno-Karabakh, including Shusha, and meaning that our peacekeepers were there, which we have agreed upon both with Armenia and Azerbaijan. At that point, the prime minister told me that his country could not agree to this, and that it would struggle and fight.”

Putin’s claim contradicted Pashinyan’s many recent public statements in which he insisted that he had never been presented with an option to end the war that didn’t involve the surrender of Shusha.

Pashinyan and his allies have not directly responded to Putin’s statement. But military journalist and analyst Tatul Hakobyan said that the prime minister needed to explain in better detail his reasoning.

“Why did Pashinyan not agree with Putin's proposal when he had clear information about the capabilities of the Armenian army?” Hakobyan asked in a column on the news website CivilNet. Hakobyan suggested that Pashinyan may have been hoping for a military turnaround, or that he preferred to lose the war fighting rather than submit to the return of Azerbaijani refugees to Shusha. “There may be other options, and in order to give a complete answer to the question, Nikol Pashinyan's explanation is needed, how, why and under what circumstances Shushi fell,” he wrote.

In the aftermath of the war, many Armenians have turned against Pashinyan, and a common claim is that he “sold out” to Azerbaijan, including by ceding Shusha when the country still had a chance to win. A series of military officials have backed Pashinyan on that claim, arguing that Armenia’s military position was much more dire than many people believed. (That belief, incidentally, was fed by government officials’ overly rosy assessments of how the war was proceeding while Armenia was rapidly losing ground.)

In a way, Putin’s statement was a defense of Pashinyan. Following his account of the October 19 and 20 discussions, he concluded: “Therefore, these accusations of treason against him are absolutely groundless. On the other hand, it remains unclear whether this was right or wrong. This is a different matter, but there was certainly no treason here.”

Some of Pashinyan’s allies seized on that latter statement.

Deputy speaker of parliament Alen Simonyan tweeted Putin’s statement, commenting, “Accusations of treason against Pashinyan have no basis.” But others mocked his selective quoting: “You are publishing only one sentence as if we can’t read, listen and understand Russian,” one responded.

But Putin’s defense of Pashinyan, such as it was, was a backhanded one, and is likely to feed into increasing criticisms of the prime minister’s decision-making during the war.

Chief of Staff of the Armenian Armed Forces Onik Gasparyan issued a statement on November 17 claiming that military officials told Pashinyan “on the fourth day of the war” that the Armenian forces were hopelessly outmatched against Azerbaijan and Turkey and that “measures must be taken to end the war in two or three days.”

On November 16 Mikayel Minasyan, the son in-law of former president Serzh Sargsyan and a frequent critic of Pashinyan, published a document on Facebook that he claimed was an earlier iteration of a ceasefire deal that could have given Armenia better conditions, including retaining Shusha, no access road to Nakhchivan, and a broader security zone around the Lachin corridor connecting Karabakh to Armenia – 10 kilometers rather than five. “This was one of the options before the document you signed. After that, you received one more offer, after which you created a hopeless situation by signing the capitulation document,” Minasyan wrote.

Pashinyan has rejected such claims, arguing repeatedly that he was never presented with an option to end the war that didn’t involve losing Shusha. “I want to explain so people understand. Before Shushi had fallen, in all possible scenarios we were going to have to surrender Shushi,” he said in a November 13 interview with public television.

Pashinyan repeated the claim on November 16 in a press conference. Later that day, the spokesperson for the Ministry of Foreign Affairs, Anna Naghdalyan, responded to a question about Pashinyan’s statement: “Let me make it clear that there has been no question about renouncing the city of Shushi in any stage of the peace process.”