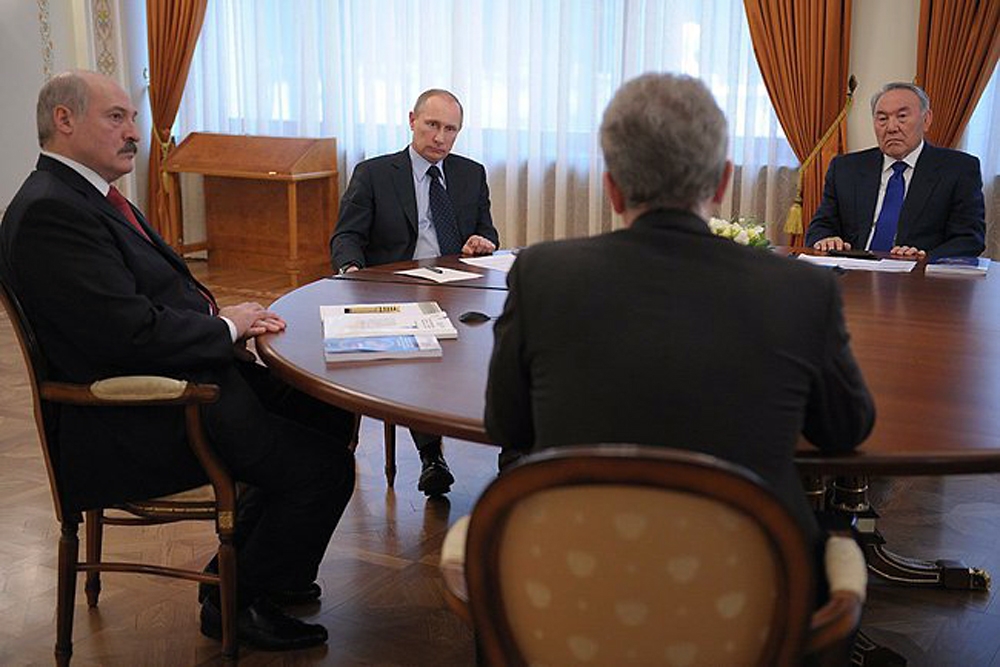 Building a new triumvirate, or is it still all about Russia? (Photo: Russian Presidential Press Office)

After offering a coldly efficient example in Ukraine of the use of hard power, Russia’s paramount leader Vladimir Putin is turning his attention to shoring up Moscow’s soft power capabilities, namely keeping his vision for Eurasian unification on track. There are signs, however, that his Eurasian aspirations will be more difficult to fulfill than his Crimean land-grab.

Putin on March 5 convened a snap summit in Moscow, also attended by Kazakhstan’s Nursultan Nazarbayev and Belarus’ Alexandr Lukashenko. The meeting’s aim was perhaps more propagandistic than substantive, designed mainly as a show of diplomatic support amid Western efforts to isolate and punish Russia for what critics see as its de facto occupation of the Crimean peninsula. At the same time, it provided Putin an opportunity to test his cohorts’ resolve to press ahead with integration. Russia, Kazakhstan and Belarus are currently co-joined in a customs union.

Putin’s Eurasian integration vision is widely seen as an ideological alternative to the EU that some have dubbed “Soviet Union lite.” Ukraine had been considered a key cog in Putin’s planned system. And now, with the Euromaidan Revolution poised to redirect Ukraine toward the West, Moscow policy planners are scrambling to make sure Eurasian unification sticks to the Kremlin timetable. A key date from the Kremlin’s standpoint is May 1, by which time a pact formally creating the Eurasian Economic Union (EAU) is due to be signed. Current customs union members – Russia, Kazakhstan and Belarus – are expected to form the EAU’s cornerstone. Armenia and Kyrgyzstan also have pledged to join, with other formerly Soviet states potentially to follow.

Putin resorted to fear tactics at the March 5 summit as he encouraged his nominal allies to circle the wagons. He said Ukraine was a “key economic partner of the Customs Union,” and that the situation in Ukraine “gives rise to serious concern.” Its economy is “in grave, if not the gravest, crisis,” which could have “negative consequences for the Customs Union market,” he continued. Customs Union members need therefore to protect their producers, and also work out “parameters for future cooperation with Ukraine.”

“We definitely need to do everything to help our partners emerge from the difficult situation in which they find themselves today,” Putin added. Meanwhile, a statement issued by Nazarbayev’s office made no mention of Ukraine and stressed that the EAU plans should stick to the established schedule. “I hope we can reach consensus on all disputed questions,” the Nazarbayev statement noted.

Given the Russian military muscle flexing in Crimea, regional political analysts expect the Kremlin to expand its use of coercive tactics in an attempt to get other formerly Soviet states to join the EAU. Ultimately, Putin wants the EAU to develop into a broad economic and political union, naturally with Russia acting as the first among equals.

“The project will be pushed with even more fervor and current and potential Customs Union members will be faced with stark choices,” said Nargis Kassenova, director of the Central Asian Studies Center at Almaty’s KIMEP University. “The Cold-War logic of ‘us’ versus ‘them’ is winning the day, and Russian policy is becoming less nuanced.”

Kazakhstan traditionally has been a staunch Russian ally, and President Nazarbayev has served as a cheerleader for integration, although even he has previously voiced concerns about Russian domination of the Customs Union. Yet early indicators show the Ukraine crisis has galvanized opposition in Kazakhstan to integration with Russia. Putin’s power play has fanned fears of Russian economic domination. Many also believe EAU membership would entail a loss of sovereignty.

“Russia, instead of trying to assure post-Soviet states that it does not have any imperial intentions … showed that it does not consider these states fully sovereign, and its interests override the international law principle of territorial integrity,” Kassenova told EurasiaNet.org. The issue of territorial integrity remains sensitive in Kazakhstan, given that some northern regions of the country are home to a large Russian minority.

Zhanbolat Mamay, an activist in Kazakhstan involved in a campaign opposing the country’s membership in the EAU, offered an even blunter assessment. “[The Eurasian Economic Union] is a revival of the Soviet Union in a new format – a Putin format,” he told a news conference on March 4.

Statements coming out of Moscow about Crimea, such as the denial that the Kremlin has deployed troops on Ukrainian territory but reserves the right to do so, is fueling suspicion in Kazakhstan. “We can’t be in a union with an occupying state,” economist Oraz Dzhandosov told the Ratel.su website.

A commentary published by the Delovaya Nedelya broadsheet said “the current crisis is perhaps the last chance for Astana to put the brakes on the Eurasian tango.” In a possible nod to the vocal opposition in Kazakhstan, Nazarbayev’s March 5 statement noted that the governments of member states should do more to explain the benefits of integration, which is being carried out for the “good of our peoples.”

In Kyrgyzstan, even prior to the Ukrainian crisis, officials were dragging their feet on the country’s membership bid. In December Bishkek angrily rejected a membership accession blueprint it said the union had tried to impose unilaterally – a sign of the highhandedness that often irks Russia’s partners.

Preparations to join the union continue, but on February 26 Economy Minister Temir Sariyev said Bishkek would not be entering “tomorrow.” Kyrgyzstan is hotly debating the benefits of membership, which would undermine booming transit trade with China, but offer better protections to millions of Kyrgyz labor migrants in Russia. The Ukraine crisis is unlikely to assuage Kyrgyz uneasiness about hitching the country’s economy to Russia’s.

By contrast, Armenia has accelerated its membership bid, announcing on March 1 a desire to complete procedures required from Yerevan by mid-April. “The move could be an attempt by the current government to assure Russia that it is firmly pursuing pro-Russian integration at a time when the opposition is questioning the Customs Union and the gas deal [giving Russia control over Armenia’s gas sector] and the Ukrainian crisis is raging,” Lilit Gevorgyan, regional analyst at IHS Global Insight, told EurasiaNet.org.

That standoff “is certainly making it more difficult for Armenia, heavily dependent economically and militarily on Russia, to pursue a more balanced foreign policy between the West and Russia,” she added. Putin indicated on March 5 that he would welcome Armenia’s accelerated inclusion in the EAU.