The Russian president and several other post-Soviet counterparts are in Yerevan for a CSTO summit, at a time when many Armenians think the organization hasn’t been doing its job. 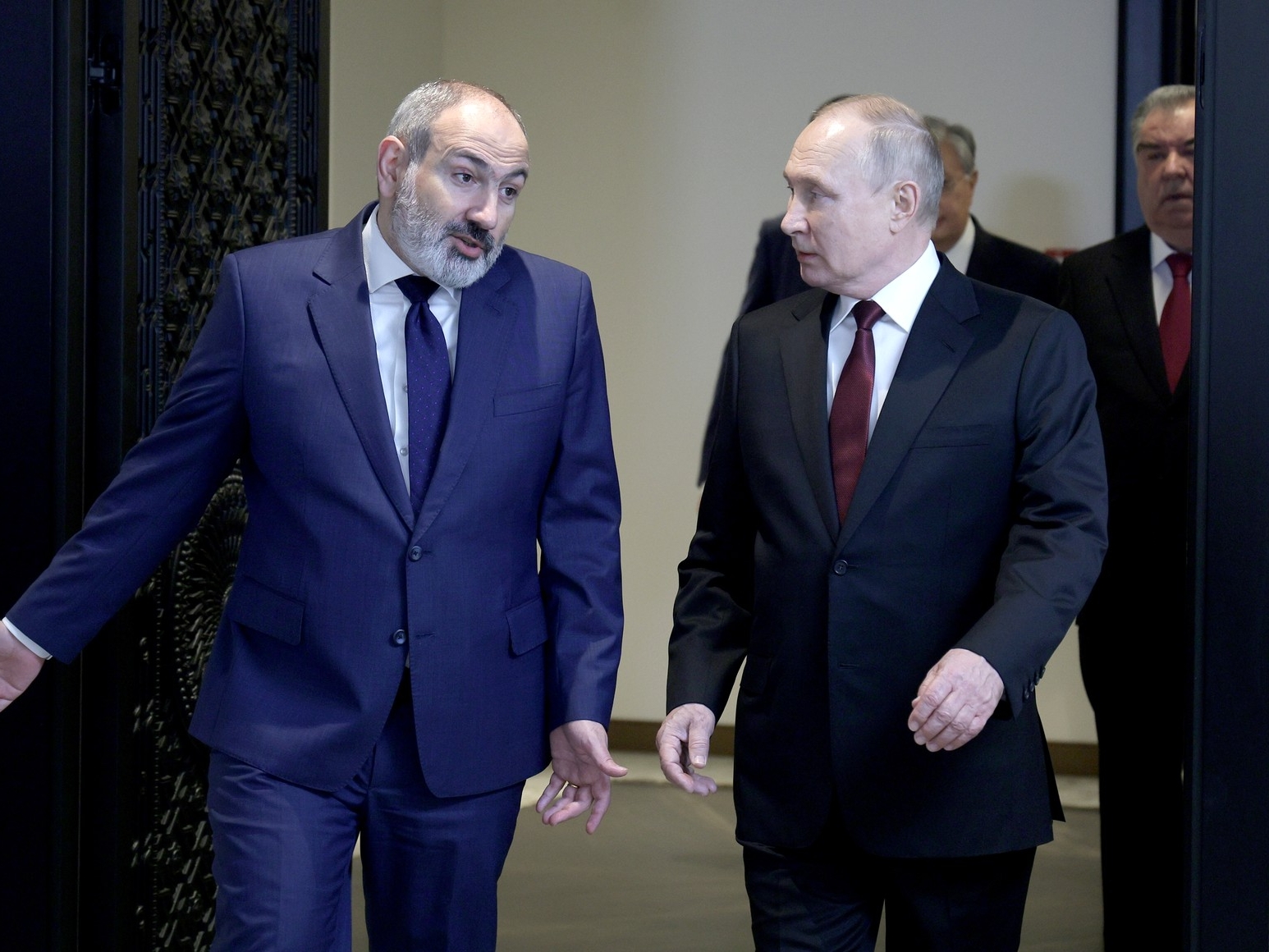 Russian President Vladimir Putin is paying a visit to Yerevan at a nadir of Armenia-Russia relations, as Armenians have lost much of their faith in their traditional ally.

Putin arrived on the afternoon of November 23 for a summit of the Collective Security Treaty Organization (CSTO), the political-military alliance that, as it happens, is the particular focus of Armenians’ anger for what they see as its failure to defend them against a series of Azerbaijani incursions.

It is the Russian leader’s first visit to Yerevan since 2019, and much has changed since then. No one expects a repeat of the most memorable moment of that trip: a friendly selfie by Armenian Prime Minister Nikol Pashinyan that captured Putin and several other rarely selfied world leaders.

The drama in 2019 was whether Pashinyan, who had come to power the year before thanks to street protests and was thought to harbor pro-Western sympathies, may take Armenia in a different geopolitical direction. That never came to pass, and Pashinyan and Putin learned to accommodate one another.

But things took a different turn in September when Azerbaijan launched an offensive into Armenian territory and the Russia-led CSTO did little in response. To many Armenians it was an abrogation of the organization’s Article 4, which obligates member states to come to each other’s defense in case of an attack.

Pashinyan has repeatedly called out the CSTO for its inaction; in a November 16 address to parliament, the prime minister said that he expected to hear the CSTO’s position on the Armenia-Azerbaijan conflict at the summit. "I think that the attitude of Armenian citizens towards the CSTO and the future of our relations with the CSTO will be formed based on this matter," he said.

Meanwhile, there have been plenty of signs of a deterioration in bilateral relations. In the wake of the September attacks Russian state media began airing a conspicuously Armenia-skeptic narrative, and Armenia declared at least one anti-Pashinyan Russian official persona non grata.

Ahead of the summit, some hundreds of Armenians and others protested both the CSTO’s inaction and Russia’s war in Ukraine.

Putin was not the only unpopular guest arriving for the November 23-24 summit. His Belarusian counterpart, Alexander Lukashenko, also came. Lukashenko has long leaned towards Azerbaijan, and recently gained renewed notoriety for calling Azerbaijan President Ilham Aliyev “our man” and by threatening Armenia that if it doesn’t sign a peace agreement soon with Azerbaijan, it will “get worse” for Armenia.

Other CSTO members – the organization includes Armenia, Belarus, Kazakhstan, Kyrgyzstan, and Tajikistan – have neutral, at most, stances vis-a-vis the Armenia-Azerbaijan conflict. In the days before the summit began, Aliyev bragged that Azerbaijan had more “friends” in the CSTO than did Armenia.

Many Armenians agree: During a November 23 protest at Yerevan’s Liberty square, Ruben Mehrabyan, a political analyst and member of the opposition "For the Republic" party told the crowd: “Aliyev was bragging that Azerbaijan has more friends in the CSTO than Armenia does. Aliyev is wrong: Armenia has no friends, and could not have any, in the CSTO.”

The heads of state of all member states were in attendance, and several other high-ranking Russian officials, including Foreign Minister Sergey Lavrov and Security Council Secretary Nikolay Patrushev also came.

Expectations were low for what the CSTO might offer Armenia during the summit, though Armenians remain hopeful that as tensions on the border with Azerbaijan continue to fester, that the organization may act as some kind of deterrent to any further Azerbaijani attacks.

After the European Union sent a small observer mission to Armenia to monitor the border with Azerbaijan, the CSTO mooted sending its own mission. Nothing more has come of the suggestion, but some observers believe that could be on the agenda in Yerevan.

A CSTO observer mission “could be a suppressing mechanism to avoid war to some extent at least,” analyst Benyamin Poghosyan told Eurasianet. While Russia may be disinterested in Armenia and Azerbaijan signing a peace agreement, “Russia doesn’t want war either since that would create problems with Azerbaijan and Turkey,” he said. “At the same time they could show the world that CSTO is not a totally meaningless organization.”

But while many Armenians have called for their country to leave the CSTO, that is likely not in the cards.

“The majority of political forces – the ruling party, the parliamentary opposition and a significant part of the nonparliamentary opposition – all support maintaining relations with Russia and recognize its dominance in international affairs,” said Andrias Ghukasyan, a political scientist and leader of the Constructive Party of Armenia, in an interview with news site Caucasian Knot. “There is a small group of parties not in parliament, which advocate for a rupture in relations with Russia, but practically all of these parties cooperate with Nikol Pashinyan.” Their anti-CSTO rhetoric helps strengthen Pashinyan’s hand in his talks with other CSTO leaders, Ghukasyan argued, “allowing Pashinyan to ‘prove’ what unpredictable circumstances could come from a break in relations.”