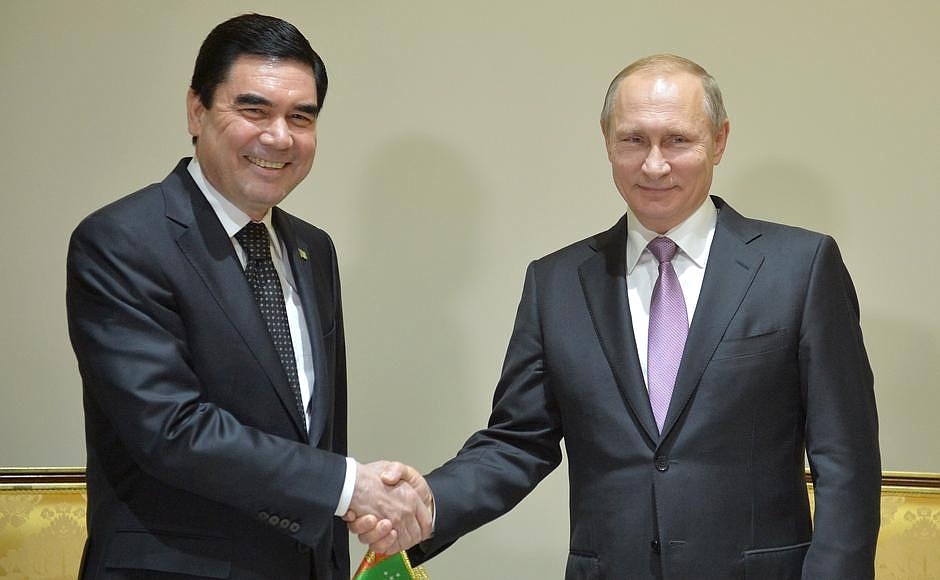 The disruption of air traffic over the Caspian Sea is a sacrifice necessary for the sake of fighting terrorism, Russian President Vladimir Putin has said.

Russia's launch of cruise missiles from warships in the Caspian against targets in Syria prompted several airlines, including Kazakhstan's flag carrier Air Astana, to suspend flights over the sea in mid-October. Last week, Russia launched another salvo of missiles from the Caspian to Syria.

Putin's recent comments came during a meeting with Turkmenistan President Gurbanguly Berdymukhammedov at a gas conference in Iran. It was raised in a curious fashion: Berdymukhammedov brought it up and said it was something that worried Kazakhstan, without mentioning what his own opinion might be.

"Our Kazakh colleagues are very worried about what is happening above the Caspian Sea," Berdymukhammedov said, according to a Kremlin transcript. This is connected with military issues. So the issue has arisen connected with international civilian air traffic, should traffic be altered, the flight level. I don't know if you are aware of this issue, but our Kazakh colleauges are very concernd about this."

Putin's answer was basically: we're the ones fighting terrorism on everyone's behalf, so don't complain about these kinds of inconveniences.

As for concerns from our friends in the region about the use of airspace above the Caspian Sea, our Kazakhstani friends have not said anything about this yet, but we will keep it in mind. We understand that there are probably limitations and it creates a certain inconvenience, but we all know that all of Russia’s efforts in the fight against terrorism are primarily a burden on the Russian Federation, economically speaking. Terrorist organisations like the Islamic State, Jabhat al-Nusra and others do not spare anyone. They are engaged in true atrocities, and they do not spare civilian targets, such as civilian aircraft. So if any inconveniences are created, they should certainly be minimised, and we will keep this in mind.

This is perhaps Russia's strongest statement yet that it considers the Caspian its own sea and that Moscow's priorities for it overrule those of other coastal states, including Kazakhstan.

It's not clear why Berdymukhammedov was bringing this up on behalf of the Kazakhs, but the Kazakh service of Radio Free Europe/Radio Liberty asked the Kazakhstan Foreign Ministry for comment and were told that the MFA was "forbidden by law from discussing this issue openly."

And for whatever reason, it does appear that Kazakhstan and Turkmenistan are treating the security over the sea differently. A check to the flight-monitoring website flightradar24 on Wednesday found a Turkmenistan Airlines flight from Istanbul to Ashgabat passing directly over the sea, while an Air Astana flight from Istanbul to Astana was skirting the northern coast.

Meanwhile, Azerbaijan also has been relatively silent on the issue. A report this week in the opposition news website contact.az complained that "Russia's provocative and reckless behavior over the Caspian continues to threaten the security of Azerbaijan and other coastal states, but Baku has for some reason not responded."