Every country in the region has its own relationship with self-proclaimed breakaway republics, forcing them to reckon in their own ways with Russia’s moves in Ukraine. 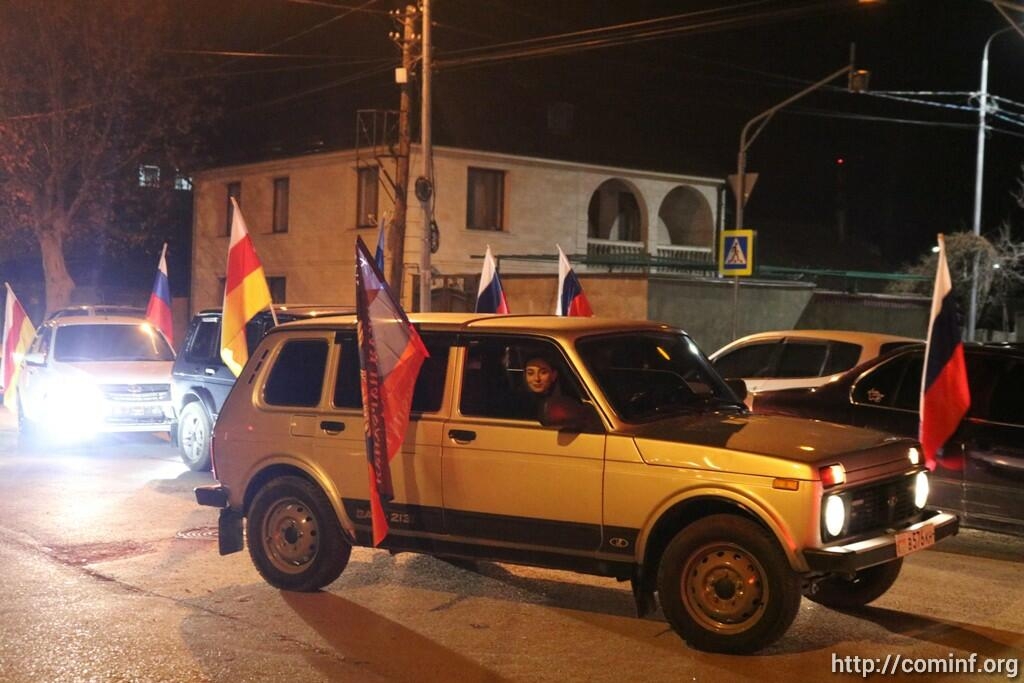 Russia’s formal recognition of eastern Ukraine’s two separatist republics has been closely watched – with dread, celebration, or quiet concern, depending on the viewer’s own geopolitical situation – in the Caucasus, which boasts the post-Soviet world’s greatest concentration of unrecognized breakaway states.

Russian President Vladimir Putin announced the formal recognition of the Donetsk People’s Republic and Luhansk People’s Republic (known as the DNR and LNR, respectively, using their Russian acronyms) in a late-night speech at the Kremlin on February 21.

The news reverberated heavily in the Caucasus, home to two self-proclaimed independent states that have been recognized by Russia since 2008 – Abkhazia and South Ossetia – and one that has not been, Nagorno-Karabakh.

In Georgia and its two breakaway republics of Abkhazia and South Ossetia, where the parallels are closest, the reactions were swiftest and strongest.

Georgians for the most part used the opportunity to call attention to their own comparable experience: Following the 2008 war over South Ossetia, Russia formally recognized the two de facto republics as it sought to blunt Georgia’s moves toward NATO integration.

“Recognizing Ukraine’s territories - Donetsk and Lugansk as independent states by Russia represents yet another flagrant violation of the fundamental principles of international law, and in fact repeats the scenario of Russia’s military intervention into Georgia’s Tskhinvali region in 2008 and subsequent recognition of the independence of this region and of Abkhazia/Georgia, and their occupation,” the Georgian Ministry of Foreign Affairs said in a statement. (The “Tskhinvali region” is a phrase some Georgians use to refer to South Ossetia. Both it and Abkhazia broke away from Georgia in civil wars in the 1990s.)

“The recognition of #Donetsk and #Luhansk by Russia is another step directed against the fundamental principles of international law and unfortunately repeats the occupation of Georgian territories in 2008,” tweeted Georgian Prime Minister Irakli Garibashvili. “We strongly support the sovereignty and territorial integrity of Ukraine.”

Russia’s recognition of Abkhazia and South Ossetia has led to an intensification of Russia’s financial and military backing of those entities, including a hardening of the physical boundaries between them and Georgia proper.

The recognition did not, however, catch on internationally. It was followed only by a handful of other states all with no real connection to the Caucasus, including Venezuela, Nicaragua, and Nauru.

And it was in Tskhinvali where the news from the Kremlin was received more enthusiastically than anywhere else in the Caucasus. The ruling party there organized a car rally where participants drove around waving flags of both the de facto republic, as well as a late-night folk dancing performance in celebration.

“The recognition of Donbass means hope for a better future for tens of millions of people,” said the entity’s de facto leader, Anatoliy Bibilov. “The same recognition from Russia has for 13 years preserved South Ossetia’s peace and territory.”

While the DNR and LNR recognized Abkhazia at the same time that they did South Ossetia, the move was not reciprocated by official Sukhumi, which keeps Russia at a somewhat greater distance than does South Ossetia.

“We are sure that this decision will enable the strengthening of the security architecture in the region,” Bzhania said in a statement. “Moreover, we believe that Russia’s decision to recognize the Donbas republics will facilitate the formation of a more fair and balanced world order, where the rights of small states are reliably protected, and the international community listens to and respects their voices.”

But there has been no indication yet whether not Abkhazia intends to follow suit and recognize the two Ukrainian breakaway states, but an Abkhazian diplomat said the issue was on the table.

"Given the allied relations with Russia, and in particular the agreement on alliance and strategic partnership ... this issue will definitely be considered," Kan Taniya, an ambassador-at-large, told Eurasianet. "I cannot say how soon this will happen, since the situation in the Donbas is still tense."

Since the 2020 war between Armenia and Azerbaijan, which resulted in about 2,000 Russian peacekeepers being deployed to the remaining NKR-controlled part of Karabakh, the Karabakh Armenians have become more reliant on Russia, potentially changing Stepanakert’s calculations.

Karabakh’s de facto president, Arayik Harutyunyan, welcomed the news of Russia’s recognition of the DNR and LNR. “The establishment of an independent state and its international recognition becomes an imperative especially in the face of existential dangers, as it is the most effective and civilized means of preventing bloodshed and humanitarian disaster,” he wrote in a Facebook post.

It was not clear, however, whether Stepanakert intended to extend recognition as well. The de facto Foreign Ministry did not respond to a query from Eurasianet as of press time.

In Azerbaijan, the calculations were more delicate. Relations with Russia are a roller coaster, and Baku tries to support territorial integrity as a general principle – to bolster its case that Karabakh should remain part of Azerbaijan – while tailoring the particulars of its position to its relations with the specific states involved.

As the Ukraine crisis has intensified over the last several weeks, Aliyev has met repeatedly with his Ukrainian counterpart, Volodomyr Zelenskiy. And each time Zelenskiy expresses Ukraine’s respect for territorial integrity, while Aliyev never reciprocates.

As is often the case in dramatic international situations, Azerbaijani officials have remained quiet following Putin’s announcement. President Ilham Aliyev, as it happens, began a visit to Moscow the day that Putin made his announcement. But neither he nor the country’s foreign ministry have said anything about the recognition of the DNR and LNR.

Even at Aliyev's meeting with Putin the afternoon of February 22, he managed to avoid the topic. While Putin mentioned the recognition, he also took pains to emphasize that Russia didn't have any territorial designs on any other post-Soviet republics. "With Ukraine, it's a different situation, connected with the fact that, unfortunately, the territory of that country was being used by third countries to create a threat to Russia itself. That was the only issue," Putin told Aliyev. Aliyev, in his public remarks, did not address Ukraine at all.

Armenia, too, has remained largely silent in the first day following Russia’s announcement. Armenian Prime Minister Nikol Pashinyan spoke with Putin by phone hours before the latter made his announcement. Pashinyan’s office said in a statement that the two “discussed the situation developing in Russia-Ukraine relations and questions of regional security.” The Kremlin’s readout said that Putin invited Pashinyan to Moscow and that the latter had accepted.

This article has been updated to include remarks from the Putin-Aliyev meeting, and comments from an Abkhazian diplomat.