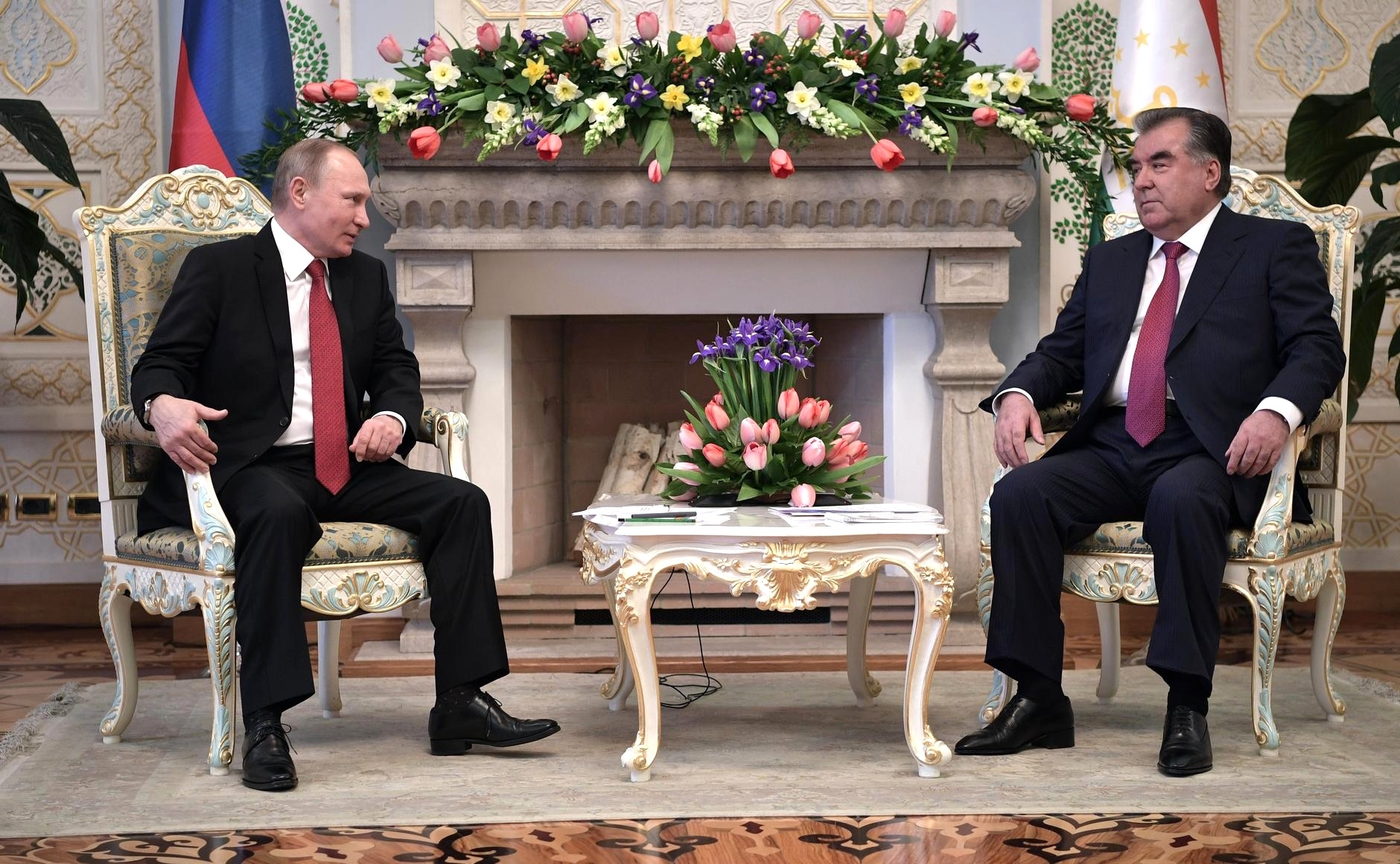 Anybody expecting major developments out of Russian President Vladimir Putin’s visit to Tajikistan will be left disappointed as nothing of note appears to have transpired.

Putin exchanged the usual pleasantries with his Tajik counterpart, Emomali Rahmon, during their February 27 meeting in Dushanbe, while paying some very cursory and noncommittal lip service to the need to intensify defenses against potential threats spilling over from Afghanistan.

No mention was made of the Eurasian Economic Union, quashing suspicions for now that Tajikistan was considering finally relenting and joining the Moscow-led trading bloc. In fact, a very pointed reference was made in a speech by Rahmon to how talks addressed specifically bilateral relations.

“During the talks, we thoroughly reviewed the status and prospects of Tajik-Russian cooperation in the bilateral format and within international forums such as the United Nations, the Shanghai Cooperation Organization, the Commonwealth of Independent States, and the Collective Security Treaty Organization,” Rahmon said.

The most significant break for Tajikistan was signaled by Putin’s remark about his government considering a revision on a ban of Tajik citizens barred from traveling to Russia for one or other reason.

“We discussed this. And overall a solution has been found and we will work in line with an agreement reached with the president of Tajikistan,” Putin said.

Russian deputy prime minister Igor Shuvalov, who traveled with the visiting delegation, said that more than 200,000 Tajik citizens may currently be affected by travel bans. Shuvalov said bans would likely be waived for those people that had committed only minor violations of migration laws.

“Those that committed crimes or were in some way involved in illegal activity will, of course, not be granted permission to enter,” he said.

Vague commitments were also made to drafting legislation that would improve conditions for Tajik migrant laborers in Russia. Labor security is in effect near to nonexistent for many Tajiks in Russia and abuse of workers’ rights is the norm.

How Russia’s increasingly nationalistic population, which is daily fed news stories about Europe’s imminent collapse under the weight of an unstoppable wave of migrants arriving from the Islamic world, will take to dozens of thousands of Tajiks getting the green light to pack their bags is anybody guess. It is not likely state media in Russia will devote much attention to this concession.

Tajikistan also wants to see more of its people earn further qualifications to enter better-paid areas of the labor market.

“We now have branches of three Russian institutes of higher learning in Tajikistan, and we have around 20,000 of our citizens studying in Russian universities, including through quotas set by the Russian government. We are grateful to the Russian government for their decision to increase the quota for Tajik students this academic year,” Rahmon said.

Predictably, references to security earned some headlines in regional media, although even here nothing new or firm actually materialized on the day.

“The presidents discussed the situation in Afghanistan and noted the importance of promoting stability and development in this country. The parties will continue to coordinate efforts to neutralize security threats coming from the south in the direction of the Commonwealth of Independent States,” the joint communiqué read.

A glancing reference was made to the 201st military base, Russia's largest military presence outside its border, but again only to formally acknowledge its role in upholding security.

On the trade front, the biggest takeaway was a notional pledge to increase the export of “ecologically clean” produce from Tajikistan to Russia. The reference to cleanliness is unlikely a casual throwaway, since the selective detection of impurities in food imports is Moscow’s favored technique of slapping sectoral embargoes on its trading partners when relations sour.

One potentially intriguing possibility was alluded to in the blink-and-miss-it reference to bilateral cooperation in the development of Tajikistan’s hydroelectric potential.

“Both sides will work on opportunities to increase the export of electricity produced in Tajikistan in line with the region’s needs,” the joint statement said.

Whether that means Russia could consider somehow again getting involved in the project to finally build Tajikistan’s ambitious Roghun hyrdo-electric dam is not certain, but Dushanbe must hope it does, since it clearly does not possess either the funds or the expertise to complete the project on its own.