“Queen of the Caucasus” makes state visit to Moscow

The six-day trip to Russia by Azerbaijan’s vice president and first lady signaled her growing profile in Baku. 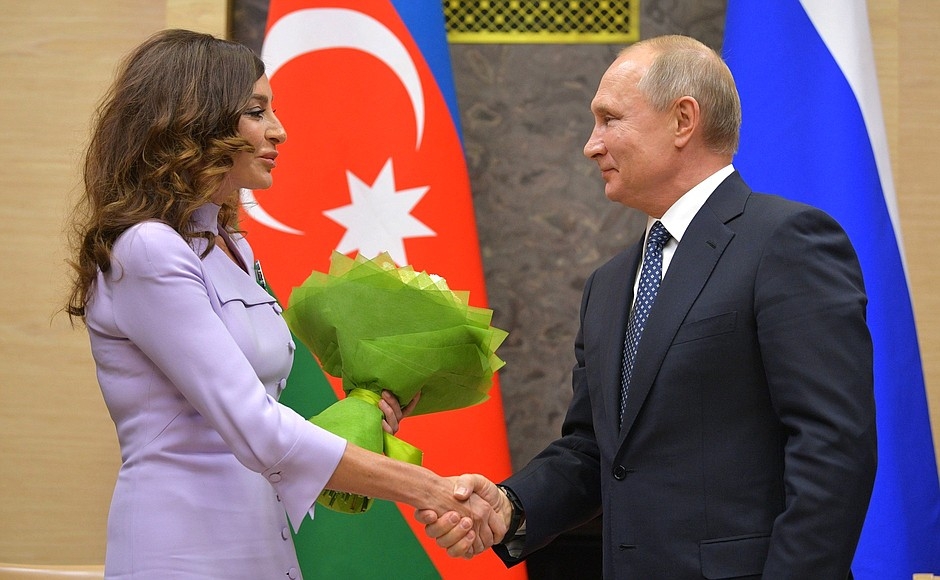 Azerbaijan’s first vice president and first lady has made her first state visit, to Russia, signaling her steadily growing profile in Azerbaijan’s government.

Mehriban Aliyeva visited Moscow from November 20-25 and met with Russian President Vladimir Putin, Prime Minister Dmitriy Medvedev, and a series of other high-ranking officials. She attended the reopening ceremony of the Azerbaijan pavilion at the retro Soviet Exhibition of Achievements of National Economy (VDNKh), visited the Moscow International Biennale of Contemporary Art, and an Azerbaijan-Russia business forum.

But more than any contributions she made to Azerbaijan-Russia relations, it was the mere fact that she was sent on the mission that seemed significant.

Aliyeva was appointed as first vice president more than two and a half years ago, after never having evinced much interest in public affairs other than her role chairing the charitable Heydar Aliyev Foundation, dedicated to the father and predecessor of her husband, President Ilham Aliyev.

Since then, though, she has gradually assumed a more and more prominent position in state affairs, a rise punctuated by the state visit to Azerbaijan’s most important partner. The visit, wrote independent news agency Turan, was evidence of “Mehriban’s gaining momentum on the state ladder.”

But other observers saw another explanation: an attempt to create a smokescreen deflecting attention from the increasingly unpopular rule of Aliyev. The visit to Moscow was likely meant “to show to the public that she is being taken seriously,” said Altay Goyushov, the head of the think tank Baku Research Institute.

Aliyeva’s rise – whether PR or not – has been part of a larger, ongoing reshuffle in the government, with many long-serving officials being replaced by younger, technocratic and economically trained cadres. Many of the new officials also are associated with Aliyeva’s wealthy family, the Pashayevs, who represent a critical center of power in Azerbaijan.

The most recent personnel move was the removal, in late October, of Aliyev’s longtime top adviser Ramiz Mehdiyev. A couple weeks before that, it was Prime Minister Novruz Mammadov.

“The net winner of this struggle is … Aliyeva and her extended family, the Pashayevs,” Tom de Waal, a Caucasus analyst at the think tank Carnegie Europe, told the independent Azerbaijani news outlet Meydan TV.  “Aliyeva is now chairing meetings on economic issues in the government,” de Waal said, adding that the “Nakhchivan clan” from the Aliyevs’ home region was being sidelined: “They have given way to a Baku-based business-political elite instead.”

Some in the Russian press had different interpretations. While in Russia, Aliyeva said that Moscow “felt like home” and recalled fondly her days as a student there. The Kremlin-friendly news site Regnum, analyzing the visit, saw her rise in the context of a persistent social division in the country between those with Russian- and Azerbaijani-language educations. Aliyeva represented the former, in Regnum’s words, a “Bakuvian subethnos,” which “is gaining ground due to Russia’s rising position in the international arena.”

Others placed a heavy emphasis on her glamorous appearance. News portal Gazeta.ru, referencing both that and perhaps also her country’s increasingly dynastic form of rule, headlined its story about her visit “Queen of the Caucasus.”