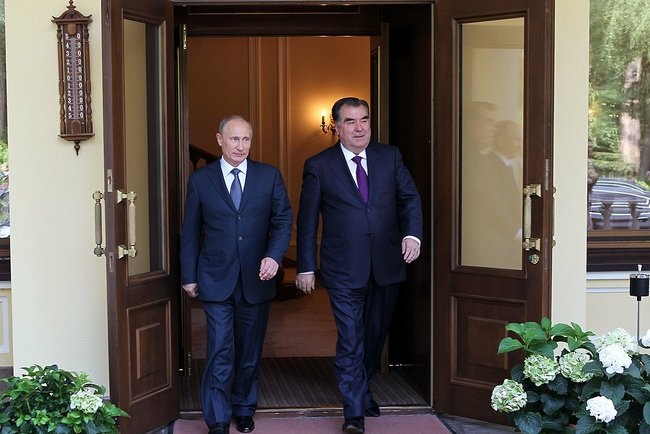 Tajikistan President Emomali Rahmon traveled to Moscow this week to meet with his Russian counterpart, Vladimir Putin. At the top of the agenda was the long-delayed ratification of the agreement, signed last year by the two presidents, to extend the presence of Russia's 201st military base in Tajikistan until 2042. While Russia has already ratified the agreement, Tajikistan has been dragging its feet for reasons that remain unclear. But after the meeting in Moscow, Rahmon promised that the parliament would ratify the deal by this fall:

“I'd like to say that we treat this issue [of the Russian military base] very seriously,” Rahmon said, “and we are firmly committed to fulfilling our obligations. Now that we have solved a range of issues concerning the base, and as our parliament is returning from holiday, we will solve this issue by the fall of 2013.”

The two sides also apparently discussed the $200 million in military aid that Moscow has promised Dushanbe. One detail that emerged is that this amount is to be disbursed over a period stretching until 2025. “President Vladimir Putin’s orders are straightforward: to assess all risks and to help the Tajik armed forces face these risks,” Russian Defense Minister Sergei Shoigu said after the Putin-Rahmon meeting.

As usual with these sorts of meetings, details were scarce but speculation rampant. Much speculation centered around what the two discussed about Tajikistan's upcoming presidential elections. Political analyst Shokirjon Hakimov told the Tajikistan newspaper Avesta:

I think that as we approach the presidential elections in Tajikistan, considering the influence Russia has over the media and the Russian factor in the region as a whole, Rahmon will make some concessions and give the order to the Tajikistan parliament to ratify the agreement on the extension of the presence of the Russian military base, although many conditions of the agreement contradict the national interests of Tajikistan.

Even pro-presidential analyst and member of parliament Sukhrob Sharipov acknowledged that Putin's support in the elections was probably discussed "over tea," though he emphasized that the accumulated issues around the ratification of the base agreement would have necessitated the meeting anyway.

Still, no new details emerged about the particular elements of the base agreement, like the deals on labor migrants and supplies of gas and oil, which seem to have been sticking points. But Tajikistan's defense minister, Sherali Khairulloyev, stayed on in Moscow to work with Russian defense officials on the details about military cooperation, so perhaps some political decision was reached on that.