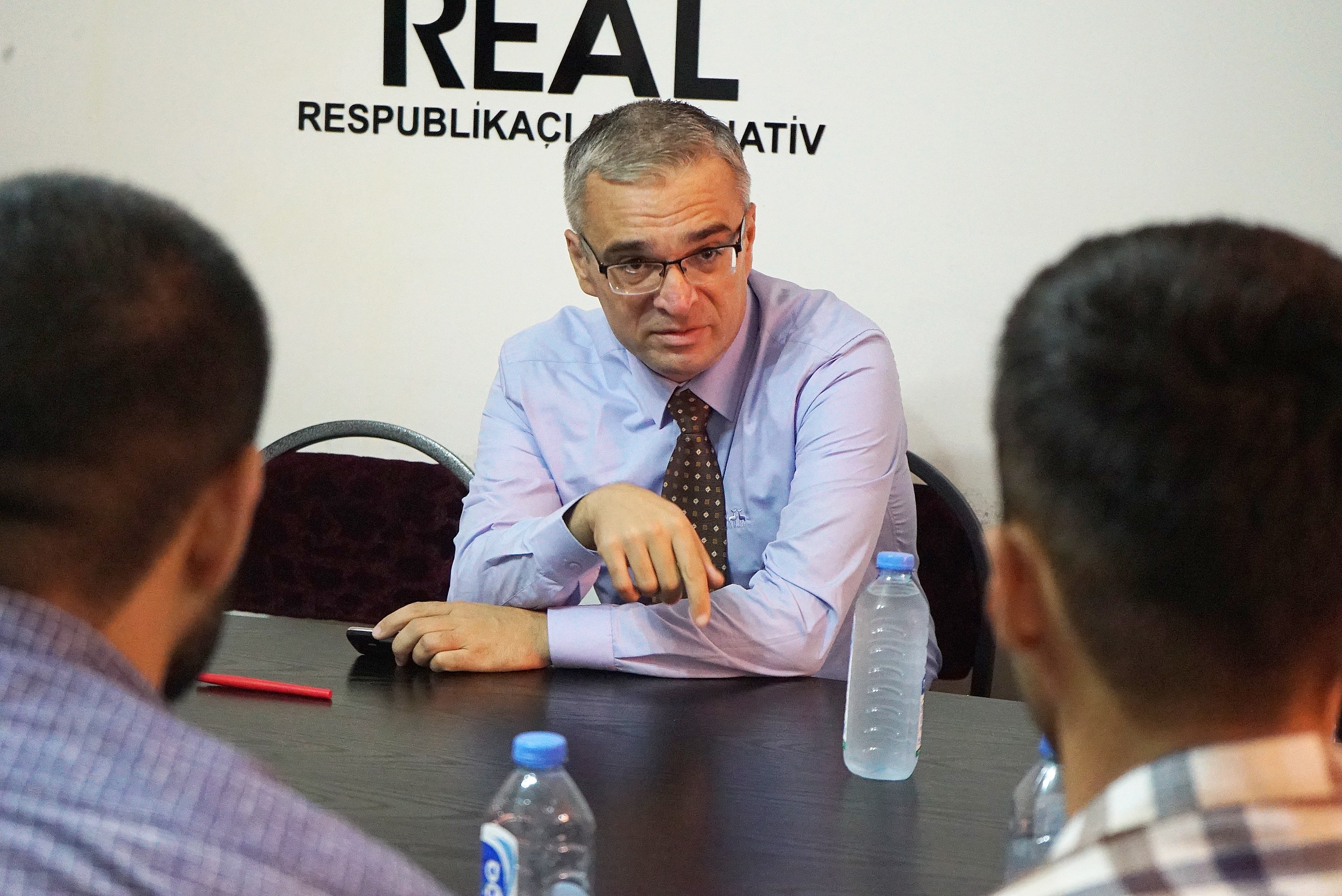 Does an opposition politician have any hope in Azerbaijan?

The question may seem absurd on its face: Azerbaijan is one of the most authoritarian governments in the world, where the family of President Ilham Aliyev has over the years increasingly tightened its monopoly over the government. There are no opposition parties in parliament, and independent politicians are systematically forced into exile or imprisoned.

But Ilgar Mammadov believes that not all is lost in Azerbaijan. Once the country's most famous political prisoner, Mammadov was released in August and has resumed his position as head of the Republican Alternative Party, or REAL. Now, he says that REAL intends to contest elections and believes it has a fighting chance.

“We are not that naive to assume that all of a sudden President Aliyev will choose to conduct free and fair elections. That is not going to happen,” he said. But with enough political pressure, he said, the authorities can be forced to run at least a partially free election that would allow his party to win some seats in parliament. “A quality change is something that is certainly achievable. If we get a good representation in the parliament, even if the elections were not perfect, that may introduce new dynamics.”

The scenario Mammadov is sketching out – an opposition party leveraging its handful of seats in parliament into a broader change and ultimately removing the Aliyevs from power – draws inescapable comparisons to Armenia. There, earlier this year, Nikol Pashinyan parlayed his party's small perch in parliament to lead a popular movement that ultimately forced longtime leader Serzh Sargsyan to resign and propelled him into the prime minister's position.

Mammadov shies away from direct comparisons to Pashinyan. But he said that Armenia’s “Velvet Revolution” has had an impact on the political thinking of Azerbaijanis, particularly the educated middle class that he sees as REAL's core constituency.

“The whole society was watching the events in Armenia very closely. [...] The middle class of Azerbaijan, students, low- and middle-level government officials, entrepreneurs and so on – the class which is in contact with Georgians and Armenians when they travel abroad – they feel kind of underprivileged,” he said. “The sense of inferiority appears in that class when they compare Azerbaijan with Georgia and Armenia, in the sense that those two nations were able to at least try the democratic path. But we are still failing. And that sense has a political significance.”

Mammadov spoke to Eurasianet in REAL's small office just outside central Baku, and repeatedly apologized for the dust and disorder caused by ongoing renovations. The offices were sparsely decorated, save for posters celebrating the Azerbaijan Democratic Republic, the short-lived experiment in democracy a century ago that the country's opposition still reveres as an inspiration for today. In one corner, an Azerbaijani flag was positioned next to one from the European Union. Mammadov, a fluent English speaker, looked like one of the entrepreneurial class he aims to represent, wearing jeans, a crisp shirt and stylish glasses.

Before being released in August, Mammadov had spent five years in prison on charges of organizing mass riots. The European Court of Human Rights ruled that the charges against him were politically motivated, aimed at silencing or punishing him for criticizing the government, and called for him to be released. When Azerbaijan refused to implement that ruling, the Council of Europe initiated proceedings that could have led to the country being kicked out of that body. Mammadov ultimately was released the week before German Chancellor Angela Merkel visited Baku.

Mammadov was released only on probation, and is still pursuing a full acquittal. Without being acquitted, it's not clear whether he can legally run for office in Azerbaijan; he said party lawyers are currently researching the question.

In the meantime, he said he will try to mobilize politically, both inside Azerbaijan and internationally, to pressure the authorities in Baku not to block him from running. The next national elections are for parliament, scheduled for late 2020, but REAL is pushing for early elections.

While Azerbaijan's beleaguered opposition frequently boycotts elections in the belief that the deck is too stacked against them, Mammadov said that a boycott is a poor strategy as long as there is at least the potential for fair elections in the country. “Despite all the shortcomings of the electoral code, ODIHR [the international election-monitoring organization] believes that it is in principle possible to conduct free and fair elections even on that law. Otherwise they wouldn't send 500 observers, spend millions of dollars, to observe elections,” he said.

The Azerbaijani opposition also is notorious for infighting, and Mammadov said that REAL, at least, intends to change that. “There was a time when I did criticize the old opposition severely, for many reasons which they deserved. But now I don't see any point in fighting against them or campaigning against them,” he said.

Part of the reason is political: REAL has already sufficiently differentiated itself from other political parties, making it no longer necessary to criticize them. It is also partly for security: Mammadov said he has received threats from “the very top of the government,” and he recalled the case of Rasim Aliyev, a media rights activist who was beaten to death after criticizing an Azerbaijani soccer player on Facebook. Many still suspect that Aliyev's death was related to his politics.

“They [the government] use any little quarrel with a group not affiliated with the government to achieve their ends, be that harassment or even murder,” Mammadov said. “So if I quarrel with these guys [opposition], at some point they can just murder me and say 'oh, it's just internal, settling accounts within the opposition.' This is a very serious security consideration.”

As a result, he said, “I have to be at peace with everyone, crazy, non-crazy, groups of bicycle lovers, or I don't know who else. The only side which I will continue to criticize is the government.”

For now, the government has mostly ignored Mammadov's political efforts. One commentator with a reputation as a pro-government attack dog wrote a lengthy takedown whose tone was mostly mocking: “It's clear that what moves you is a desire to seem bigger, stronger, wiser, and so on than you actually are.”

Even many of Mammadov's sympathizers see his political chances as meager. “They are not ready for the fight in this situation,” said Samed Rahimli, a human rights lawyer who was affiliated with the party in the past, but is no longer. “Not only REAL, but all the opposition forces lack grassroots participation. Without grassroots participation you can't fight in the streets to take back your rights.”

Mammadov said that the membership of the party counts in the “thousands” and that it has opened 20 offices across Azerbaijan.

Another ally, longtime opposition politician and analyst Zardusht Alizadeh, said he took the longer view. While the government may control every lever of power, Mammadov can publicly raise issues that people care about and which the government is unable to address. “And Mammadov and his friends can formulate these issues and show people that he sees and knows how to solve these problems, that is to set the agenda. And the moment will come when that will be their advantage.”