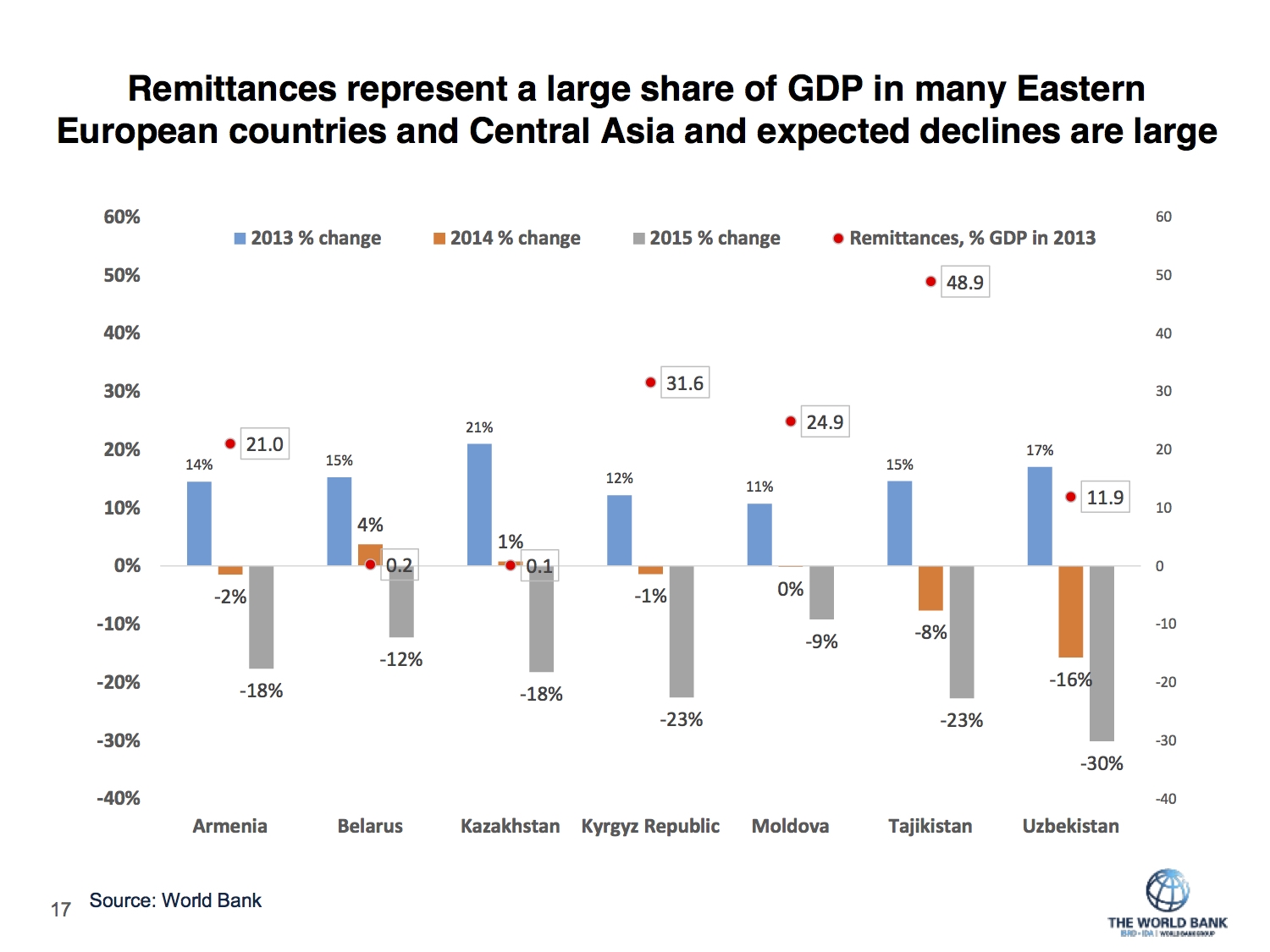 New data show that Central Asian governments have been right to fear Russia’s economic crisis was heading their way: Remittances from migrant laborers are falling sharply, more than in any other region worldwide.

Migrant remittances are the largest single source of foreign currency in Tajikistan and an important factor in declining poverty rates throughout Central Asia in recent years. So the contracting Russian economy and stricken ruble – brought on by a sudden fall in oil prices and Western sanctions – have a direct impact on millions of the region’s laborers and their families back home.

“Overall, reduced remittances are likely to worsen standards of living in remittance-receiving countries, and the increasing number of returned migrants could put upward pressures on unemployment rates,” the World Bank said in a regular briefing on April 13.

Tajikistan – which sends approximately one-half of its working age males to labor in Russia – is the most remittance-dependent country in the world. Remittances account for the equivalent of 49 percent of GDP, according to the World Bank. In dollar terms, they fell 8 percent last year, largely in the fourth quarter, and are expected to decline another 23 percent in 2015.

Kyrgyzstan is the world’s second most remittance-dependent country, with remittances totaling the equivalent of 32 percent of GDP. Last year they fell 1 percent, but are expected to drop another 23 percent this year.

In Uzbekistan, where remittances total the equivalent of 11.9 percent of GDP, they fell 16 percent last year; they are expected to drop another 30 percent in 2015.

The region’s currencies have all been affected. In recent weeks Tajikistan’s government has taken drastic measures to staunch the somoni’s losses. The currency is down 14.5 percent against the dollar so far this year.

Indeed, the sharp remittance declines have been augmented by the ascendant dollar, the Bank noted, which has reduced the purchasing power of cash transfers:

With the ruble rebounding somewhat in recent weeks and the price of oil not as low as some had forecast, losses this year may not be as bad as predicted. But uncertainty reigns, and new regulations making it harder for Central Asians to work legally in Russia are also taking a toll on transfers.

The World Bank expects remittances to Central Asia will start growing again in 2016.