A year after an environmental assessment of the project was supposed to determine its fate, the project remains in limbo. 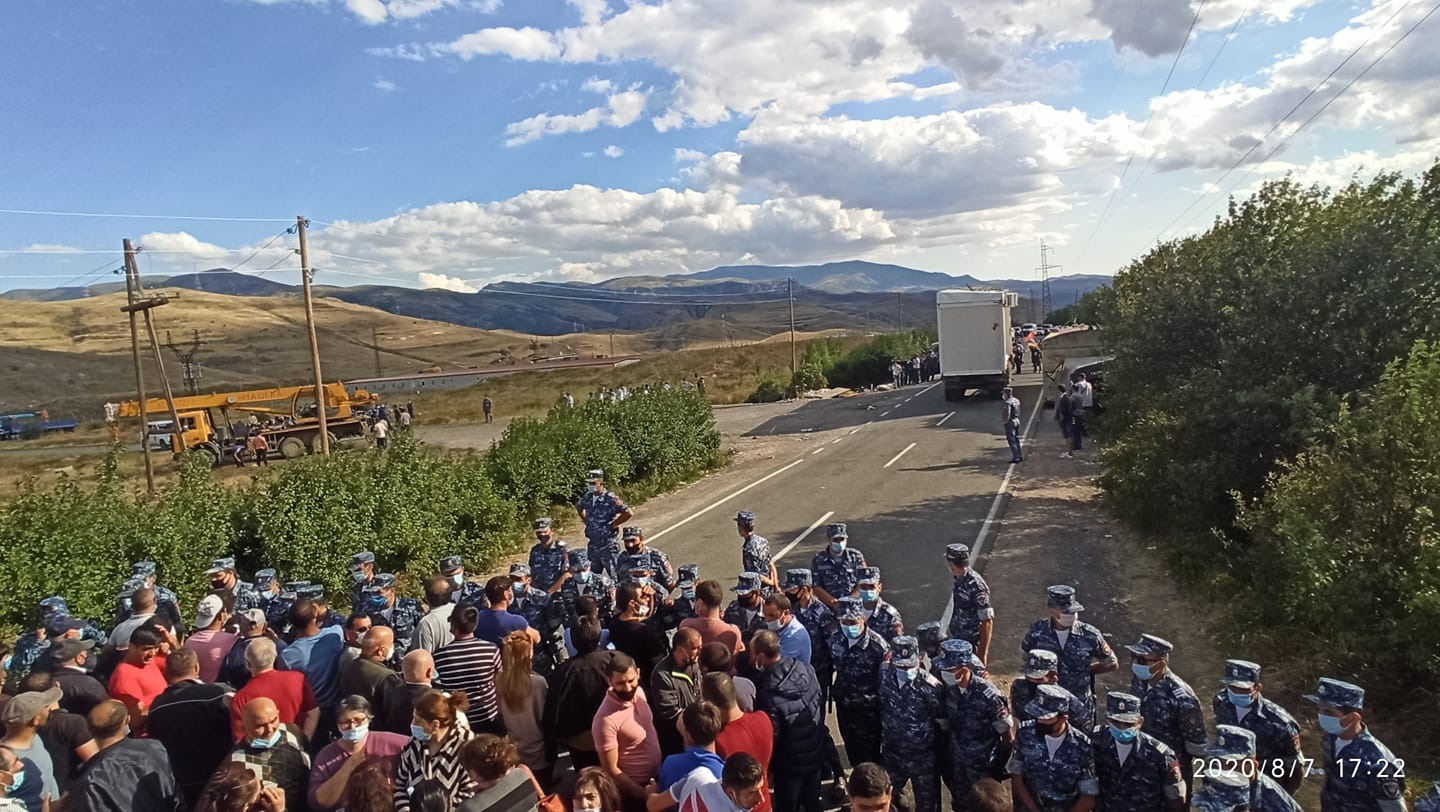 Protesters watch as police carry away guard trailers that sparked a new round of demonstrations at a controversial gold mine. (photo courtesy of Tehmine Yenoqyan)

Recent renewed conflicts over a controversial gold mine have highlighted the Armenian government’s continuing indecisiveness over the future of the project.

On August 4, clashes between activists, local residents, police, and mining company officials broke out at the entrance of the mine, near the eastern Armenian city of Jermuk. Officials from the company operating the mine, Lydian Armenia (the local subsidiary of a British mining firm), attempted to remove some cabins that had been set up by activists who have been protesting there since 2018, and to replace them with new cabins for company guards.

The activists complained that the guards, from a recently hired security company, had been behaving inappropriately. “They are armed, provoking people, swearing at them,” activist Themnine Yenokyan told the local service of RFE/RL. The protesters are demanding that the government cancel the project, which they say will badly damage the surrounding ecology and the water supply.

The mine contract, which was signed by the previous government, ousted by Prime Minister Nikol Pashinyan in 2018, has been one of the most sensitive issues that the new government has had to face. It has pitted grassroots activists, of the type that were instrumental in bringing Pashinyan to power, against proponents of the project – including Western embassies and investors – who insist that it will provide the kind of jobs that he has promised.

In an effort to resolve the deadlock, Armenia’s Investigative Committee ordered an environmental impact assessment, which was released a year ago and which Pashinyan took as a green light to let the development of the mine proceed. The impact to groundwater resources would be as small as "washing a car on the beach," he said last August.

But just two weeks later, his government reversed course following a spirited public debate, and said it would study the issue further. Since then the issue has languished, one that to many Armenians has exemplified the government’s inability to make difficult decisions. Lydian, meanwhile, has threatened to sue if the government cancels the project.

At Amulsar, eventually police removed the Lydian-installed cabins, representing a victory for the protesters.

The demonstrations then moved to Yerevan. On August 10, several activists picketed parliament with signs like “Amulsar is a mountain, our struggle is just.” Police soon broke up the protests.

“They started to inflict violence on me and others WITHOUT ANY WARNING OR DEMAND,” one of the activists, Arman Gharibyan, posted on Facebook (in English). “I was screaming that their actions are illegal that they don't have the right to arrest me. Nobody was listening. Later in the police unit they were not giving me even a glass of water telling that there is no water in the unit and nearby shops.”

The government has remained silent over the recent developments.

Human rights activist Nina Karapetyants told journalists covering the protest in front of parliament that, “If this was before the revolution, 40-50 percent of [members of the current] National Assembly would be by our side. Today, they value their positions and bonuses much higher than the words and rights of their friends, their voters and the people.” She said the silence of the authorities suggested that they were waiting “to see whoever wins and then stand by them.”