Students are protesting that they can’t afford to return to the capital to resume their studies in person because rents have gotten so high, a trend many blame on the recent Russian influx. 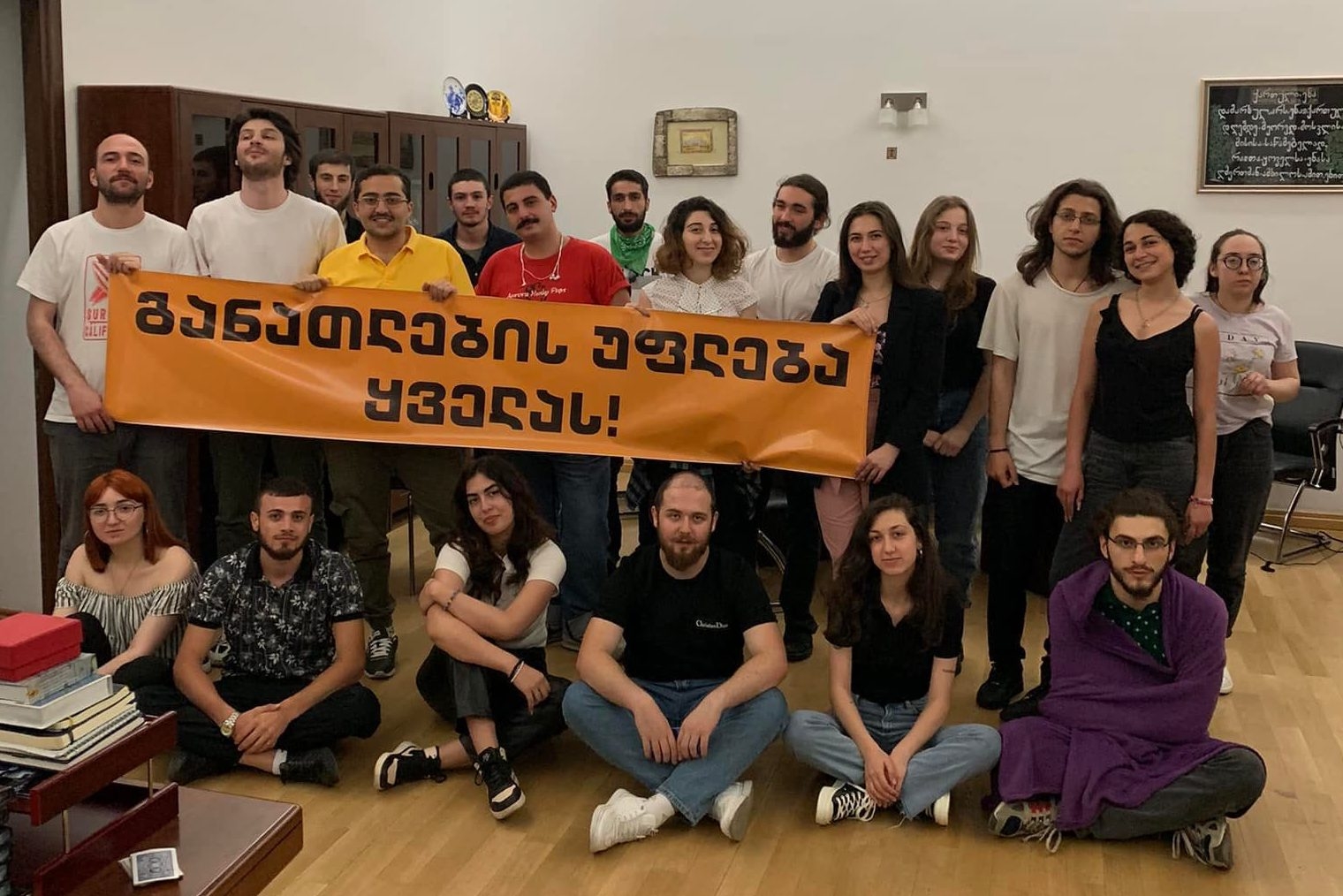 Georgia’s flagship state university has been hit by noisy protests as students are rejecting a return to mandatory in-person learning, arguing that rents in the city have gotten too high.

Tbilisi State University announced early in the spring semester that it would resume classes on campus in May, mid-semester, after more than two years of remote learning as a result of the COVID pandemic. Some of the school’s 22,000 students refused, in particular those from outside the city who have to rent their own apartments, and in April launched continuous demonstrations at the university.

Students who were already in Tbilisi were joined virtually by other students still stuck in their hometowns; the sympathetic Tbilisi-based students have carried laptops to the demonstrations with their classmates in the regions protesting via Zoom.

In May the university made a concession: Students could continue to attend class remotely but would have to come to take their final exams, scheduled for June and July, in person.

But the protest organizers said that was still too much of a burden on students. It also, they said, did not address their broader demands: building a dormitory that would be a more permanent solution to the student housing problem, more financial transparency for the university, and the resignation of the school’s rector, whom students accused of not taking their concerns seriously.

So the protests continued, and drew the nationwide spotlight on June 10, when some students forcefully stormed the office of the rector; images of the event went viral. In the ensuing fracas four university staffers were injured and had to be taken to the hospital, the university said.

The next day, the protest organizers condemned the violence and apologized for “exceeding the bounds of their freedom of expression.”

But they said they intended to continue to protest. “Neither the university nor the social environment we live in has left us any other choice but to take radical measures,” they said in a statement.

Tbilisi State University has for years been the site of large student protests, usually centered around the political independence of the institution and academic matters. But the pandemic and the worsening economic situation have added a more social element to this round of demonstrations.

The protests have drawn sympathy from many Georgians, especially as skyrocketing rents have become a hot topic. There have been widespread reports in Georgia about landlords abruptly evicting tenants to seek better-paying clients. Real estate agencies have reported Tbilisi rents nearly doubling as inflation rises, an influx of Russians has driven up demand, and landlords are seeking to take advantage.

“Today [landlords] are asking for rent to be paid in dollars,” one student, Nino Janjalashvili, told local news site Netgazeti in April. “Many who had already rented an apartment were called by real estate agents and told to leave the apartments as they didn’t want the rent to be paid in lari any more.”

Others, though, have complained that the students’ protest tactics are illegitimate. “Even if we share students’ position [about online exams], there is no justification for these methods,” said Ghia Nodia, a prominent Georgian political analyst, following the incident of June 10.

“Quite naturally, a suspicion emerges that they hope to pass online exams easier and this is why they started this fuss,” he added.

Sympathizers pushed back against those arguments, saying they focused too much on a single incident.

“They want to be like the West [where student protests are common], but they don’t want to see angry students except in movies,” a well known artist, Erekle Deisadze, wrote on Facebook.

Some skeptics thought the students were demanding too much.

But dormitory life is not yet a part of university culture in Georgia, or in the rest of the region. Tbilisi hosts several of the country’s top universities with tens of thousands of students, but students either have to live with their families or relatives or rent apartments of their own. A persistent lack of part-time job opportunities, and now inflation – which in May reached an annual rate of over 13 percent – have exacerbated the situation.

Tbilisi State University does have two affordable dormitories at its disposal. But one, built in the 1970s, is in dire condition and the newer one only has room for 320 students.