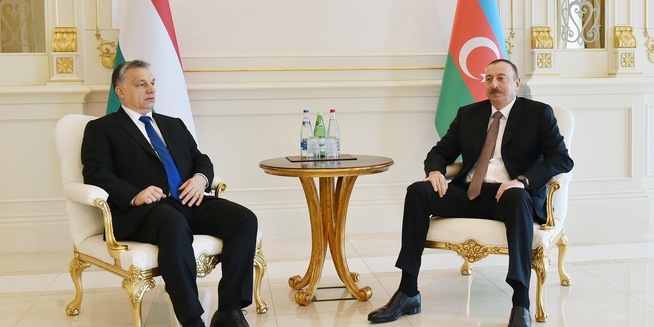 A new report has uncovered a $7 million payment from Azerbaijan into a Hungarian bank account, timed suspiciously closely to Budapest's extradition of a convicted axe-murderer to Baku, where he was given a hero's welcome and pardoned.

Some of these funds – totaling more than $7 million - reportedly made their way into account of the Budapest-based MKB Bank right around the time the government of Hungary handed convicted killer Ramil Safarov to Azerbaijan.

According to Atlatszo.hu, the Hungarian bank account belonged to an offshore company, Velasco International Inc., owned by the son of an influential politician in Baku.

The report notes that Hungarian Prime Minister Victor Orban visited the Azerbaijani capital in June 2012 (right before the release of Safarov), where he was greeted by then-First Deputy Prime Minister of Azerbaijan Yaqub Eyyubov, father of Orkham Eyyubov, the offshore company’s owner.

Eight years prior, Safarov, then a lieutenant in the Azerbaijani army, murdered Armenian army lieutenant Gurgen Margaryan in Budapest. The two were in Hungary participating in a NATO-sponsored language program.

Safarov walked into the sleeping Margaryan’s dormitory, partially decapitating him with an axe before stabbing him repeatedly in the chest. Safarov was soon arrested and tried in a Hungarian court where he was convicted of murder in 2006 and sentenced to life in prison.

Just after his meeting in Baku, the Orban government allowed Safarov to be extradited to Azerbaijan, prompting an international outcry. Armenia later severed diplomatic ties with Hungary as a result, and unsubstantiated theories proliferated.

After his release, Safarov was greeted by an adoring crowd in Baku, where he walked the streets carrying a bouquet of roses, draped in the national flag. He was later pardoned, promoted to the rank of major and given a luxury apartment by the Azerbaijani Defense Ministry.

When asked about these reports at a press conference on Wednesday, Hungarian Foreign Minister Peter Szijjarto expressed his hope that the “international and national inquiries into the stories uncover what exactly happened,” adding that lack of information can lead to defamatory statements that bear serious consequences.

“In the firmest possible way, I reject any inference or insinuation which make a connection between Hungarian foreign policy decisions and the aforementioned criminal actions,” Szijjarto said. “I really hope we can uncover the truth of what happened very soon.”