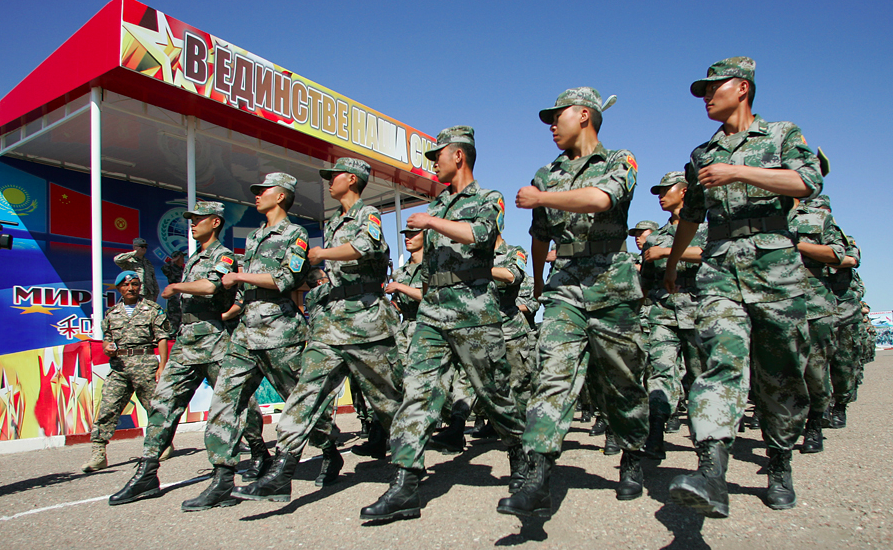 China places a priority on Central Asia as a site for training its military to operate abroad, with nearly half of its military exercises abroad involving Central Asian and Russian militaries, a new U.S. government report has argued.

The analysis of China-Central Asia relations in the report, by the U.S.-China Economic and Security Review Commission, won't surprise too many close watchers of the region. It argues that Chinese activity in Central Asia is largely economic, that Chinese military activity there is relatively limited but growing, and that China's economic and security policy is oriented towards maintaining stability in the ethnically Uyghur and frequently restive province of Xinjiang, which borders Central Asia.

But there are a number of interesting observations in the report, which was based on interviews with experts and government officials from the U.S., China, Central Asian countries, and elsewhere.

For example, the priority that the Chinese military apparently places on Central Asia as a training ground. It notes that most of Beijing's security cooperation with Central Asia is conducted under the auspices of the Shaghai Cooperation Organization, which is dominated by China but also includes Kazakhstan, Kyrgyzstan, Russia, Tajikistan, and Uzbekistan.

While the SCO military exercises had over the years seemed to be declining in importance, as the organization took on more of an economic role, the last major exercise, in 2014, was the organization's biggest in ten years. And SCO exercises play an outsized role in preparing the Chinese military to operate outside its borders, the report argues:

On the whole, these exercises are not particularly sophisticated, and observers point out that they are largely scripted events with minimal interoperability demonstrated by troops from the participating countries. Interoperability is hindered in part by language barriers: Russian is the common operating language used in the exercises, requiring the Chinese participants to rely heavily on translators, which can be time consuming and cumbersome.Nevertheless, the SCO has been a valuable vehicle for the People’s Liberation Army (PLA) to gain much-needed experience. Close to half of China’s military exercises with other countries have been held under SCO auspices, enabling the PLA to interact with political and military leadership of other countries; operate in unfamiliar environments outside China; address linguistic, cultural, and other logistical barriers to effective communication with foreign troops; and practice battlefield tactics and combat methods. The PLA has also achieved a number of firsts in its SCO exercises: in its Coordination-2006 exercise with Tajikistan, the PLA Air Force for the first time transported troops across the Chinese border; and in the Peace Mission-2007 exercise, the PLA conducted its first joint landair exercise outside Chinese territory.

One wonders why Central Asia plays this role for China. The Bug Pit's guess: the SCO allows Beijing to act in a way that looks multilateral, even when it's not, allowing these sorts of exercises to appear less intimidating and China-dominated than they might in other circumstances. In addition, Central Asia is a pretty tightly controlled media environment, meaning that its hosts will likely be able to keep the focus on whatever message it is that Beijing wants to send.

But Central Asia also is a security priority for China in and of itself, as a key to maintaining stability in Xinjiang:

As with its economic engagement, China crafts its approach to security relations with Central Asian countries with the domestic security situation in Xinjiang in mind. China-Central Asia security cooperation is designed largely to address shared concerns about terrorism and extremism. According to Zhang Xinfeng, one of China’s top officials with responsibility for Central Asia, ‘‘Terrorism attacks in Xinjiang are closely related to the activities of terrorist, separatist, and extremist forces in Central Asia, so joint anti-terrorist efforts from the [Central Asian] countries are crucial to China’s stability.’’ This cooperation is facilitated in part by Central Asian and Chinese governments’ shared willingness to use repression and government control—in varying degrees—to defend sovereignty and maintain stability.

China's policies toward Central Asia seem to have become more sophisticated recently; one Kazakhstani government source told the commissioners that "China’s Central Asia policy prior to 2013 had been 'chaotic and ad hoc,' but that China’s approach has been 'much more deliberate and strategic' in the years since."

The report also suggests that the many civilian infrastructure projects that China has been constructing in Central Asia are "likely" being designed with an eye to their military potential, as well. "Many of China’s highways and rail systems have been designed to military specifications," the report notes. "China’s new highway and rail projects in Xinjiang—a large yet remote region with a smaller and more dispersed military presence relative to China’s eastern regions—likely are being designed with these applications in mind."

And the report suggests that China's military presence is poised to become even greater. "China’s ability to expand its security presence in Central Asia may grow over time, particularly if a new draft counterterrorism law under consideration by China’s National People’s Congress passes," the commissoners write. "The draft law stipulates that the PLA or China’s police force could send troops outside the country to perform counter terror missions with a host country’s approval. If passed, this law could have broad applicability in Central Asia given China’s terrorism concerns there and existing structures for collaboration and information sharing between Beijing and Central Asian capitals."