Report: Tajikistan to yield share in aluminum plant to China

China's state-owned CMEC has pledged to invest $545 million in Talco. 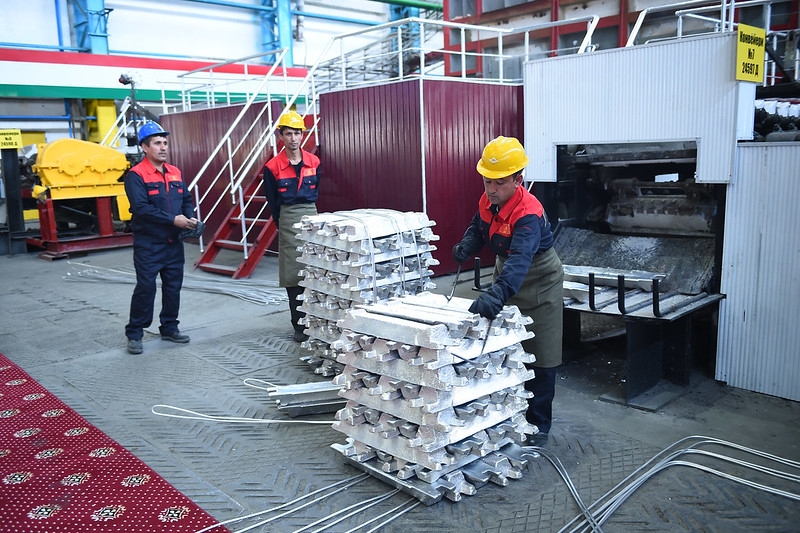 Tajikistan is reportedly on the cusp of selling a stake in its main industrial concern to a Chinese company, thereby relinquishing yet more assets in exchange for much-need cash injections.

RFE/RL’s Tajik service, Radio Ozodi, on December 4 cited Beijing’s former ambassador to Tajikistan, Yue Bin, as saying that the acquisition would be executed in return for the Chinese company investing $545 million into the Talco aluminum producer.

Talco, which is on paper fully state-controlled, has not commented publicly on the prospect of it being part-privatized. Yue offered no details about the size of any stakes to be sold.

The conditions for sale have been created, however. Under a government decree, Talco was on November 1 converted from a state unitary enterprise into an open joint-stock company. Although the shares all now belong to the government, a portion may in time be traded to private investors.

While this is the situation on paper, conventional wisdom has it that Talco is ultimately controlled by Hasan Asadullozoda, the brother-in-law of President Emomali Rahmon.

The deal for state-owned China Machinery Engineering Corporation, or CMEC, to overhaul Talco’s aluminum smelter in the town of Tursunzoda dates back to September 2017, when Rahmon visited Beijing. Talco in April announced that CMEC’s modernization program would be worth $545 million. The Tajik company did not explain at the time how it proposed to redeem the investment.

In addition to renovating an existing Talco plant, CMEC is also supposed to be building a new smelter, although no progress has been made there.

Speculation is that the hold-up may be attributable to Tajik reluctance to part with a lucrative asset. Lucrative to some, that is.

Talco owes substantial amounts to the taxman and the national electricity company Barki Tojik energy holding. This does not mean some are not profiting, however.

The bulk of the money generated by Talco passes to its tolling partner, British Virgin Islands-registered Talco Management Ltd, or TML. TML effectively acts as a financial middleman between Talco and the world, buying raw materials for the factory and selling its finished product. Talco, as a separate legal entity, receives a relatively modest fee for its part in the process.

Talco is a voracious consumer of subsidized electricity.

The company’s facilities are estimated to consume around 30 percent of the electricity that Tajikistan produces. When it pays for that power, it does so at reduced commercial rates. Households pay 22.4 dirham ($0.02) per kilowatt hour, but Talco is charged 7.2 dirham for the same amount.

The government’s gamble is that power generated by the Roghun hydropower plant now under construction could eventually be parlayed into supporting future enterprises like a new electricity-hungry Talco smelter.

If the authorities choose to emulate their prior policy of prioritizing the use of electricity for industrial purposes instead of supplying households, the routine blackouts that have been a feature of much of the past decade will likely persist to some degree.

Sale of a stake in Talco will, in effect, serve to underwrite a new wave of pollution, cover debts, but bring limited relief to the population at large.