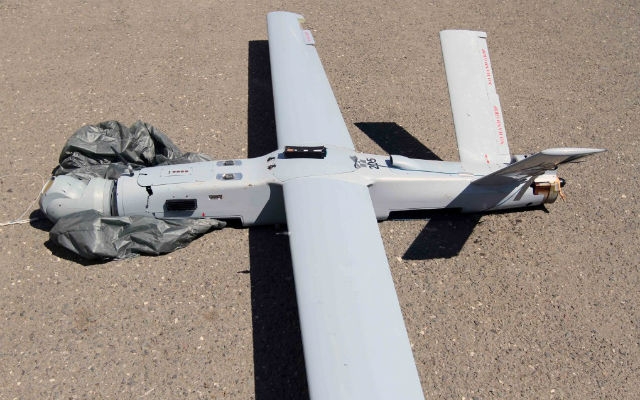 A photo released by the de facto authorities of Nagorno Karabakh of an Azerbaijani Israeli-produced ThunderB drone that Armenian forces shot down during last April's fighting.

Turkmenistan was Turkey's single largest weapons buyer over the past five years, while the arms industries of Belarus and Israel are increasingly dependent on Azerbaijan's business, a new report has shown.

The report, by the arms trade research group Stockholm International Peace Research Institute, also shows that Azerbaijan is one of the world's leading arms importers. And while a large majority of Baku's purchases still come from Russia, its dependence on Moscow is declining.

Azerbaijan was the 21st leading arms importer in the world over the period 2012-2016, according to new data published by SIPRI. Only two countries ahead of Azerbaijan on that list had smaller populations -- Israel and Singapore.

That 69 percent from Russia is a lot, but when SIPRI made similar calculations two years ago, Azerbaijan had bought fully 85 percent of its weapons over the previous five years from Russia.

Azerbaijan's arms imports outnumbered Armenia's by a 20-to-1 ratio over the past five years, according to SIPRI's data. "Armenia’s most noticed arms import consisted of a small number of 280-km range surface-to-surface missiles, which can reach nearly all of Azerbaijan," the report said, referring to the Iskander missiles recently acquired from Russia. "Azerbaijan imported a much wider variety of weapons, including tanks and armoured vehicles, anti-ballistic missile systems and combat aircraft."

Kazakhstan also made the list, at 36th place. Astana is even more dependent on Moscow, buying 76 percent of its weapons from Russia, with about seven percent each from Spain and Ukraine.

Turkmenistan ranked 40th in the world, and it has a particularly interesting mix of suppliers: 36 percent of its weapons come from Turkey, 27 percent from China, and 20 percent from Russia. Another surprising data point: Turkmenistan was Turkey's single largest arms customer over the five-year period, representing 29 percent of Turkey's exports.

Turkmenistan mainly bought ships from Turkey, with some purchases of armored vehicles as well. From China, Turkmenistan has bought primarily air defense systems and armed drones.