Reporter’s Diary: On the road to Karabakh

Our correspondent’s on-again-off-again trip to Karabakh brought home the volatile, unpredictable nature of the war. 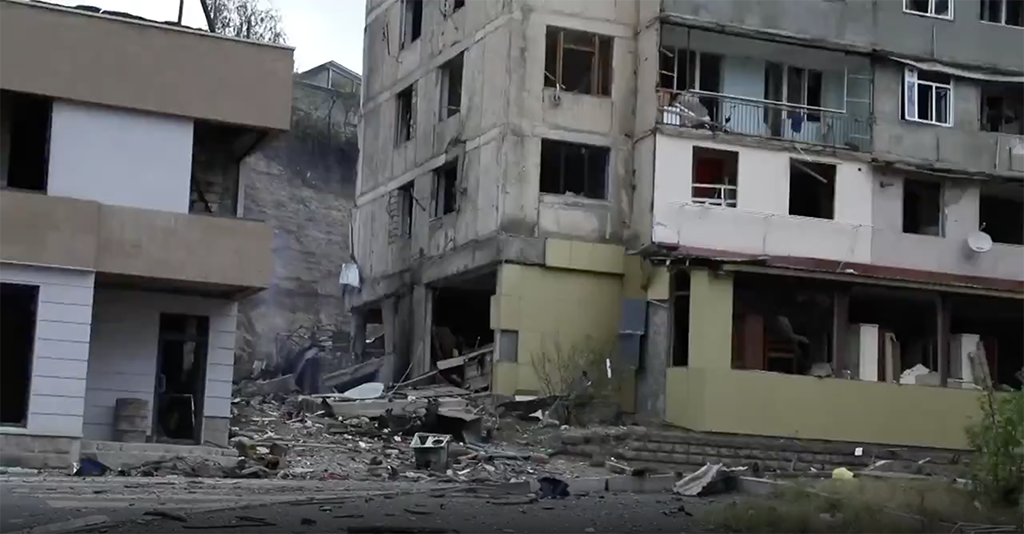 We were on our way to Karabakh when we got the news: the road ahead of us had been hit.

We were on a bus with several other (mostly foreign) journalists, including from the BBC, Xinhua, Meduza and others, that Armenia’s Ministry of Foreign Affairs had organized. We were heading to Karabakh, where fighting between Armenian and Azerbaijani forces had been going on for several days in what has been the most serious escalation since the 1990s. We wanted to see the situation for ourselves.

About two hours in to the trip, our MFA minder got a phone call. He got off the phone, talked to the driver, and the bus abruptly stopped. “We are going to have to stop for a couple of hours, until we know that it’s safe to go,” he told us quietly. “The road has been hit.”

There are two roads between Armenia and Karabakh, and the shorter one had already been closed after Azerbaijani forces reportedly took some heights above it, rendering it unsafe.

Now, the other road – from Goris through Lachin – was under attack. Video from the scene appeared to show a missile hitting the road, and Armenian officials said it was an Israeli-made LORA quasiballistic missile.

We stopped in the town of Vayk, and were let out at a roadside kebab restaurant and told we’d have to wait about two hours.

Four hours later, we were still waiting, and in walked Tigran Avinyan, Armenia’s deputy prime minister. An Armenian colleague and I rushed over to ask him what was going on, but he wasn’t offering any details. “It’s war,” he told us. “They are hitting us, we are hitting them.”

Some of our colleagues were getting impatient. A Russian YouTube journalist, who had covered the war in the 1990s, pointed out that there was still regular traffic on the road. “All these cars are passing, why can’t we go?” she asked our MFA minder. “You’re too valuable to us to risk your lives,” he answered.

Eventually we were told that we wouldn’t be going in to Karabakh that day, but that we’d try again the next morning. We drove on to Goris, an hour and a half further down the road. Frantically checking booking.com, it seemed like all the hotels were full.

The one I ultimately found was nearly full, mostly with several dozen people who had fled from Karabakh, in particular women, children, and elderly people.

Meanwhile, I thought of a character we had met at the restaurant in Vayk, who was wearing a black uniform labeled “մահապարտ” – something like “ready to die,” a volunteer unit of extra-dedicated fighters formed in the first war over Karabakh in the 1990s. He told us that Goris was probably unsafe too and that it would be better to return to Yerevan.

We slept in our clothes, ready to leave at any moment. Throughout the night we heard the rumble of military equipment and buses full of soldiers on the road.

The chaotic events of the next day underscored how volatile the situation was on the front lines and in Karabakh.

We were schedule to leave for Stepanakert at 6 a.m., but when we checked in with the MFA again, they told us the trip had been postponed. We were told to wait.

In the afternoon, we got a call from our MFA minder told us to get ready immediately, and we got on the bus again to head to Karabakh. But when we reached the de facto border point, on the Hakari River, our MFA minder got another call. “Hell no,” Hayk Manukyan, a photographer from Armenpress told me. “Not again.”

The MFA told us, again, that we’d have to turn back.

The Russian YouTuber, though, refused to get back on the bus. She went ahead on foot with her bulky luggage and no body armor. I don’t know if she managed to cross.

On our way back, we were stopped at a checkpoint that hadn’t been there when we passed the other way 20 minutes earlier.

We went back to the same hotel in Goris, disappointed but understanding that the security situation in Stepanakert had gotten much worse. There were reports of multiple strikes in the city, air raid sirens were constant, and a strike on the electricity network headquarters took out power in the entire city.

At the hotel I met a woman from Martuni, in Karabakh, who had left two days earlier with her two daughters and her mother. Her husband and brother were both active duty military and were on the front lines, she told me. Her older daughter is engaged and is supposed to get married on November 10, but the fiancé had just been mobilized.

“I feel like a criminal leaving Martuni,” she said. “I wish could stay and help somehow but I understand that dying isn’t an option, we need to continue to live and protect our children.”

We stayed the night again, and in the morning we got another call. We were trying again.