The revised plan envisions laying down pipelines, doing without compressor stations and a 2019 start date. 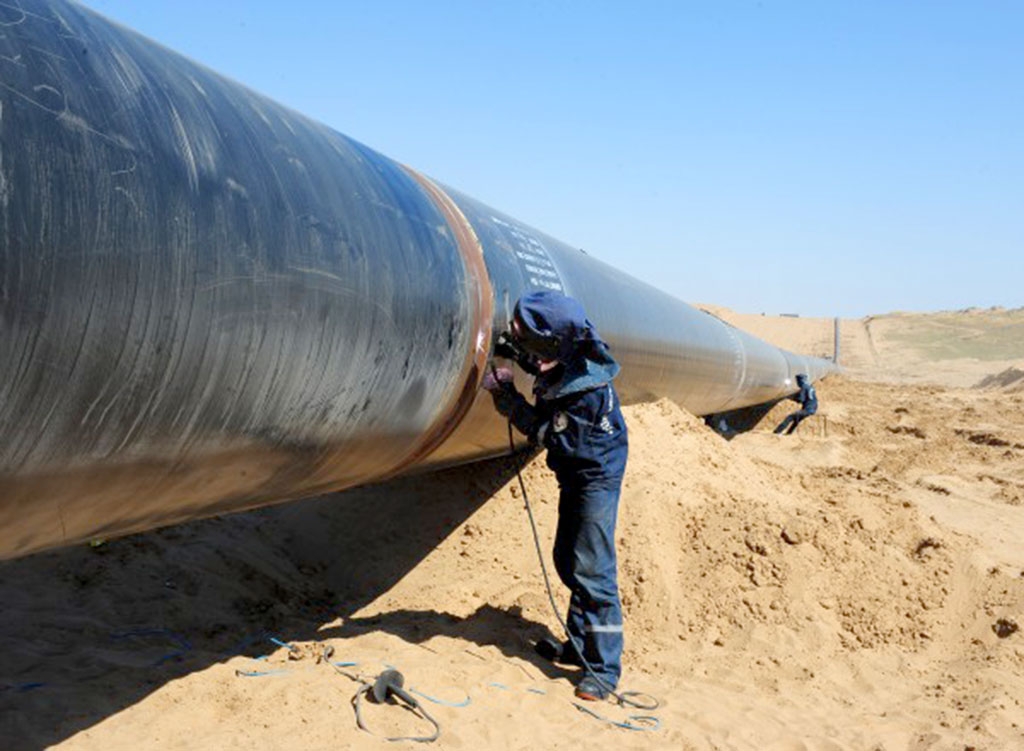 Media in Pakistan claim deliveries of gas through the TAPI pipeline could begin by 2019. (Photo: Turkmenistan presidential administration).

Depending on whom you believe, the TAPI pipeline is either going to be built super-fast or not at all.

Work on the pipeline — named after the initials of the four participating countries, Turkmenistan, Afghanistan, Pakistan and India — entered a crucial phase of construction earlier this year, but skeptics insist the project faces too many hurdles to be feasible.

Karachi-based newspaper Express Tribune is now reporting that participants of the project have now green-lit a sped-up plan to make sure gas is flowing by 2019. All the gas is being sourced from Turkmenistan’s Galkynysh mega-field.

“[The] steering committee of the TAPI pipeline project has approved a plan in this regard,” said an unnamed official cited by the Pakistani newspaper on May 1.

According to the official, the revised construction plan proposed by Pakistan envisions laying down the pipeline without installing compressor stations. In fact, late 2019 had previously been floated by Turkmenistan as a potential target launch date, although the Express Tribune report suggests the new plan brings the date forward from 2020. As the Karachi newspaper’s source notes, however, the technical shortcuts required by the revised timetable mean that only one-third of the route’s 33-billion-cubic-meter capacity would initially be utilized.

Another detail revealed by Express Tribune’s source is that the project has been divvied up into nine separate sections and that different companies are to be awarded contracts on the various sections to ensure quick implementation.

The apparent haste motivating this change of plan will be music to the ears of Turkmenistan, which is desperate to find new markets for its gas.

Officials in Iran are busy trying to dampen enthusiasm for TAPI, however, and proposing entirely alternative arrangements for getting Turkmen gas to the South Asian market.

"It is unlikely that the Turkmen gas pipeline to Pakistan will be constructed,” Hamidreza Araqi, the managing director of National Iranian Gas Company, or NIGC, told Fars news agency.

Araqi, who seems to be warming to his Cassandra role over the TAPI saga, is instead proposing another swap-based alternative. That would require Tehran taking gas from Turkmenistan and then selling an equivalent amount of its own reserves to Pakistan. Turkmenistan has two pipelines joining it to Iran — Korpedzhe-Kurt Kui and Dauletabad-Sarakhs-Khangiran — with a combined capacity to carry around 20 billion cubic meters of gas annually.

"We have announced our readiness to Turkmenistan that we are ready to export their gas to Pakistan, but have not yet received any response from them,” said Araqi.

Quite how Iran would get its gas to Pakistan is not explained by Araqi. Tehran has latterly resumed pushing for the revival of a long-stalled plan to build an Iran-Pakistan pipeline with a capacity for 40 billion cubic meters (a figure that has varied through the years). This initiative is strongly resisted by rivals like Saudi Arabia and Iran’s ultimate archenemy, the United States.

It is anybody’s guess how far Iran will go to stymie TAPI. Some in Afghanistan have alleged that it would even resort to violent means to derail the project, although it is never easy to know quite how much credence to lend such claims. The Taliban in February surprised many by pledging their support for TAPI, insisting that it was an “important element of the country’s economic infrastructure.” The would-be Islamic Emirate’s record of concern for the fate of infrastructure is patchy, to say the least, so it is probably not too bold to speculate that this is a thinly disguised shakedown.

Indeed, providing security, by whatever means, is an expensive business, and the revised Pakistan plan on TAPI does not appear to address this awkward point in the slightest. Nine construction tenders means negotiating with all those different companies and their assorted financial requirements and timetables. Nobody is really certain how much this whole enterprise is going to cost, although the round figure of $10 billion is the one being thrown about most these days. More than eight-tenths of that cash is supposed to be raised by Turkmenistan, whose government is haplessly failing to cope with an economic meltdown.

There is another TAPI outcome that lies somewhere between soon and never, as detailed in a very underreported timeframe that emerged in February, when the state-run Afghan Gas Enterprise signed an engineering design deal with Austria-based ILF Consulting Engineers. (ILF Consulting Engineers is an industry player well experienced in the region and has advised extensively on the various strands of the Turkmenistan-China pipeline network.)

According to an Afghan presidential administration press release on that deal, Mines Minister Ghezal Habibyar said that between signing agreements, designing the project, conducting social and environmental studies, de-mining, undertaking a survey of the pipeline’s route, expropriation and practical work, the whole operation could take up to four years. Going by those remarks, a more realistic date for total completion would be 2022.