Residents of a Karabakh village in limbo brace for handover

The village of Aghavno is supposed to be ceded to Azerbaijan as soon as a new road bypassing it is finished. Many of its Armenian residents say they’re not leaving. 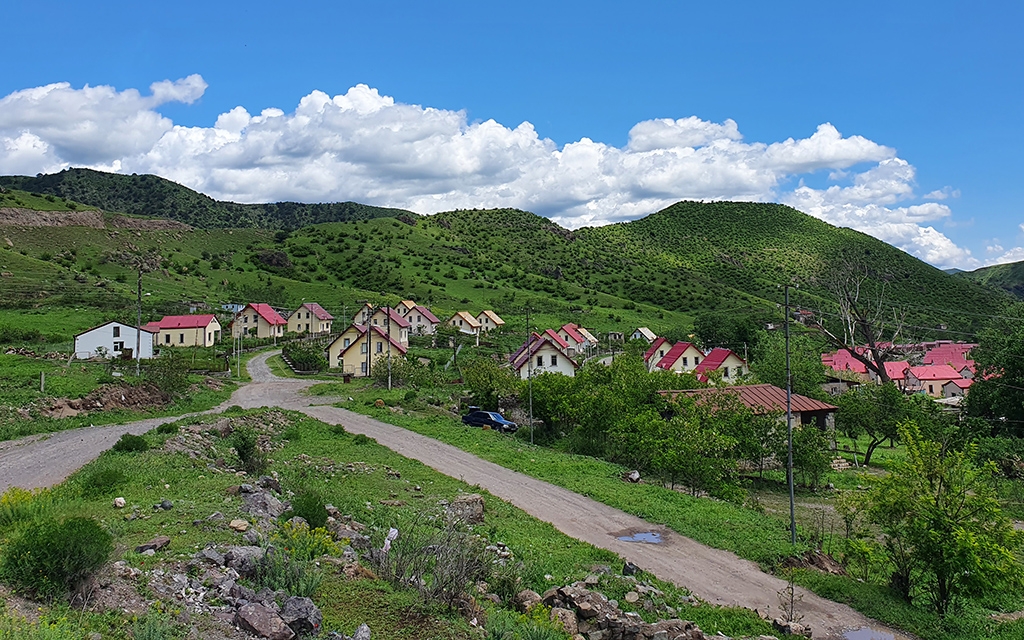 After the first war, Aghavno was rebuilt with money from Armenian diaspora organizations. (Photos by Lilit Shahverdyan)

After the war, signs of life have come back to Aghavno. Plants are sprouting in gardens, and children’s voices ring from the schoolyard.

But also visible from the village is a new road, now under construction by Azerbaijani workers. Once that road is finished – likely within a matter of months – Azerbaijan says it will take control of the village. And when that happens the current residents, all Armenians, will have to decide whether to stay or go.

Aghavno occupies a uniquely strategic place in the complex geopolitics of post-war Karabakh. Before the first war between the two sides in the 1990s, it was populated by Azerbaijanis and known as Zabukh. During that war it was destroyed, and ended up under Armenian control, along with the entire surrounding Lachin district.

It was rebuilt with heavy financial backing by Armenian diaspora organizations, renamed Aghavno, and settled by Armenians, some from Armenia itself and others from Armenian communities in Syria and Lebanon.

It lies along the road known as the Lachin Corridor, the narrow tether connecting Armenia to Nagorno-Karabakh. According to the ceasefire agreement that ended the more recent war, the entire district of Lachin was supposed to be handed over to Azerbaijan on December 1, 2020, except for a five-kilometer buffer along the corridor road. That ribbon of land was to be patrolled by Russian peacekeepers so that Armenians could continue to travel safely between Nagorno-Karabakh and Armenia. 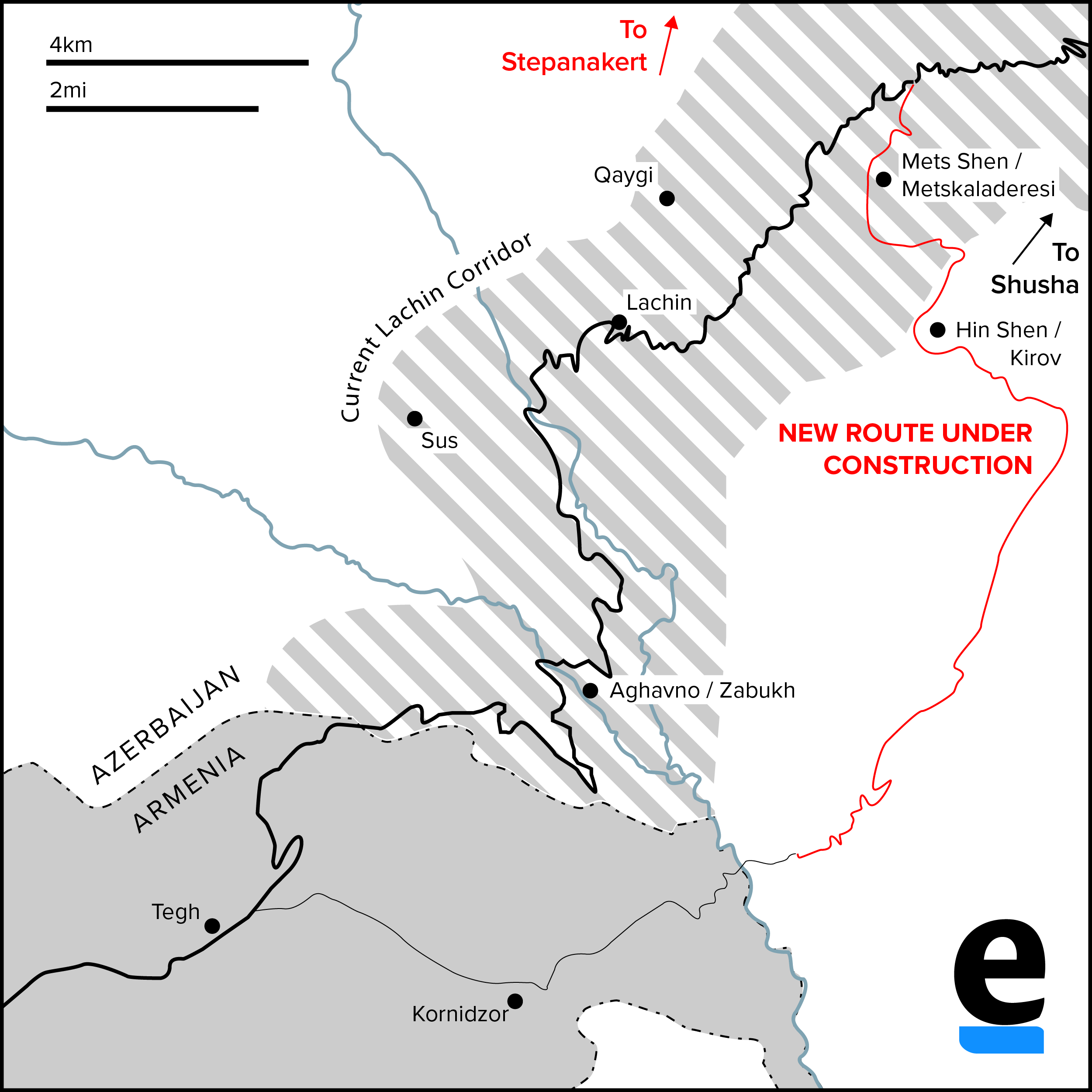 Ahead of the December 2020 handover the de facto Armenian authorities in Nagorno-Karabakh told residents of the villages along the road to leave, but a handful in Aghavno defied the orders and stayed.

Now that handful has grown: Of the village’s pre-war population of 270, 185 have come back. The village has become a symbol to many Armenians for its defiance and its people’s determination to hold their ground.

"We never had gas, so we use gas cylinders. We had power outages, so we brought generators. Water shortages? Fortunately, we have a river in the village,” Chavushyan said. "We believed in ourselves, not in the government, and refused to leave the village. We are living here today because we relied on ourselves.”

The village’s story has inspired various patriotic Armenian organizations to help support the residents who have stayed. "Mshakutamet," an initiative in which young teachers from Armenia volunteer to hold weekly classes like sewing, piano, traditional dances in rural areas, has set up a program in Aghavno. Teach for Armenia, an organization placing teachers in villages in Armenia and Karabakh, sent an English teacher to Aghavno’s school for the most recent academic year, a relatively rare opportunity for Karabakh village schoolchildren.

The school, which had 48 students before the war, now has even more, headmaster Poghos Aghabekyan told Eurasianet. About half of the current 55 students now come from the district capital of Lachin (which Armenians call Berdzor) and other neighboring communities, where the schools remained closed following the war. 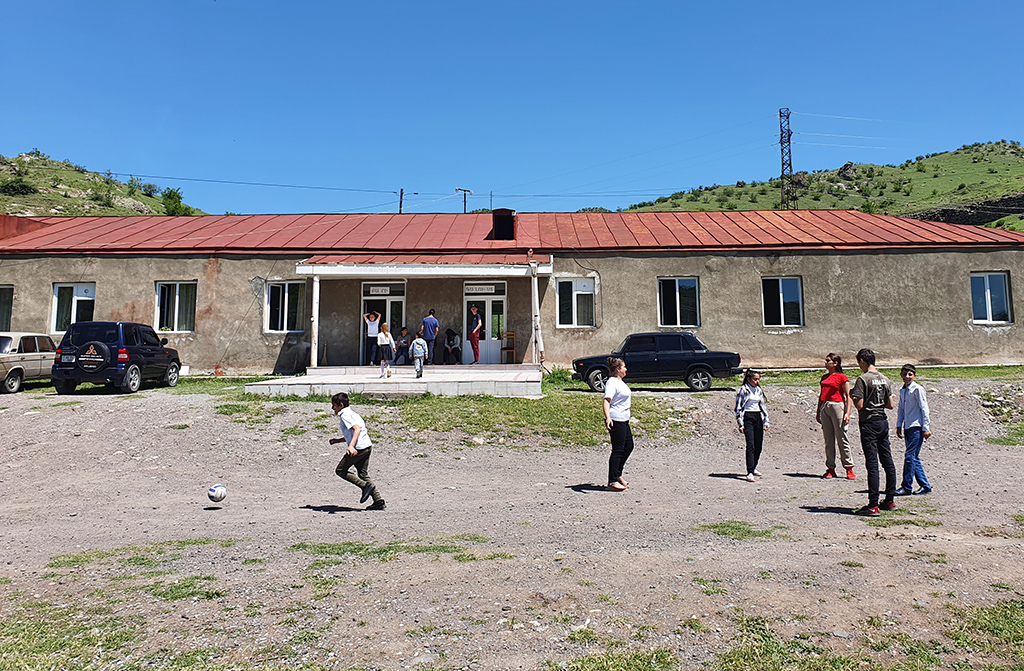 But Aghavno’s fate over the next few months is not clear. Azerbaijan has said that when it finishes the new road it is constructing, which will bypass Aghavno, it will take control of the territory along the current road. The Russian peacekeeping forces protecting the road – including a detachment just outside Aghavno – will relocate to the new road.

In April, Azerbaijani media published the first images of the construction of the new route. It will start from the Armenian border near the village of Kornidzor, then pass through the settlements of Gaygi in the Lachin region, Kirov (Hin Shen in Armenian) and Metskaladeresi (Mets Shen in Armenian) in the Shusha region before reaching Stepanakert.

The construction of the new Lachin Corridor was stipulated in the ceasefire agreement that ended the 2020 war. According to that agreement, a new route connecting Armenia and Nagorno-Karabakh will be outlined “within the next three years” and that when it is completed, “the Russian peacemaking forces shall be subsequently relocated to protect the route.”

But Azerbaijan appears to be working well ahead of schedule. The head of the Azerbaijan state road agency, Saleh Mamedov, told reporters in April that the new road would be ready to use by July.

Armenian, Russian, and Nagorno-Karabakh officials have had little to say on the construction of the new road. But the ombudsman in the self-proclaimed Nagorno-Karabakh Republic, Gegham Stepanyan, in May urged the residents of the villages along the border to stay.

In Aghavno, as rumors swirl about the potential impending handover, there are mixed feelings.

Anna Arakelyan, the history teacher at the school, said that the mood among her students darkened during the war, but that things have been gradually returning to their pre-war rhythm. Still, they know that the situation is precarious. “Sometimes I hear things like, ‘If we happen to come to school in September…’ or, ‘If we are still here this summer…’,” she told Eurasianet. “But I am sure we will not leave until the very last minute."

Arakelyan’s parents were among the first Armenians to settle here in 1992, after fleeing their home in Maragha, a village in far eastern Nagorno-Karabakh that remained under Azerbaijani control. She was the first child to be born in Aghavno after the war, in 1994.

When the 2020 war broke out, she was pregnant, and fled to Armenia. She gave birth there, but moved back to Aghavno as soon as the war ended. “We decided that we would stay regardless of what the authorities decided," she told Eurasianet.

But there are plenty of signs of people who are less determined. Some houses in the village remain empty, their previous inhabitants apparently deciding to make new lives elsewhere.

And the mayor, Chavushyan, criticizes what he calls the “suitcase mood” of some current residents thinking of leaving. But he insists that a strong core will remain. “The quantity does not matter. What matters is being strong,” he said. “I have only dozens of people around, but I trust and rely on them. If some are surrendering, then they are free to go, we will still do our job.”

Chavushyan, who is himself from Qamishli in Syria, moved to Lachin in 2014 and then to Aghavno in 2016. During the 2020 war, he organized a volunteer detachment of soldiers and got weapons from the government, he said. The village itself, far from the front lines, saw little fighting and only two houses and the school were partially damaged by Azerbaijani shells. But Chavushyan’s unit did have to defend the village from looters who came from Armenia to take advantage of the emptied-out villages.

Now, residents are ready to defend the village again, Chavushyan said. “We are responsible for our future generation. We defended ourselves in the ‘90s, we did it in 2020, and we are ready to fight again. We only need will and faith in ourselves,” he said.