Riots break out after protests in Georgia’s Pankisi Gorge

Locals protested a controversial dam project, the authorities sent in heavy forces, and clashes broke out. 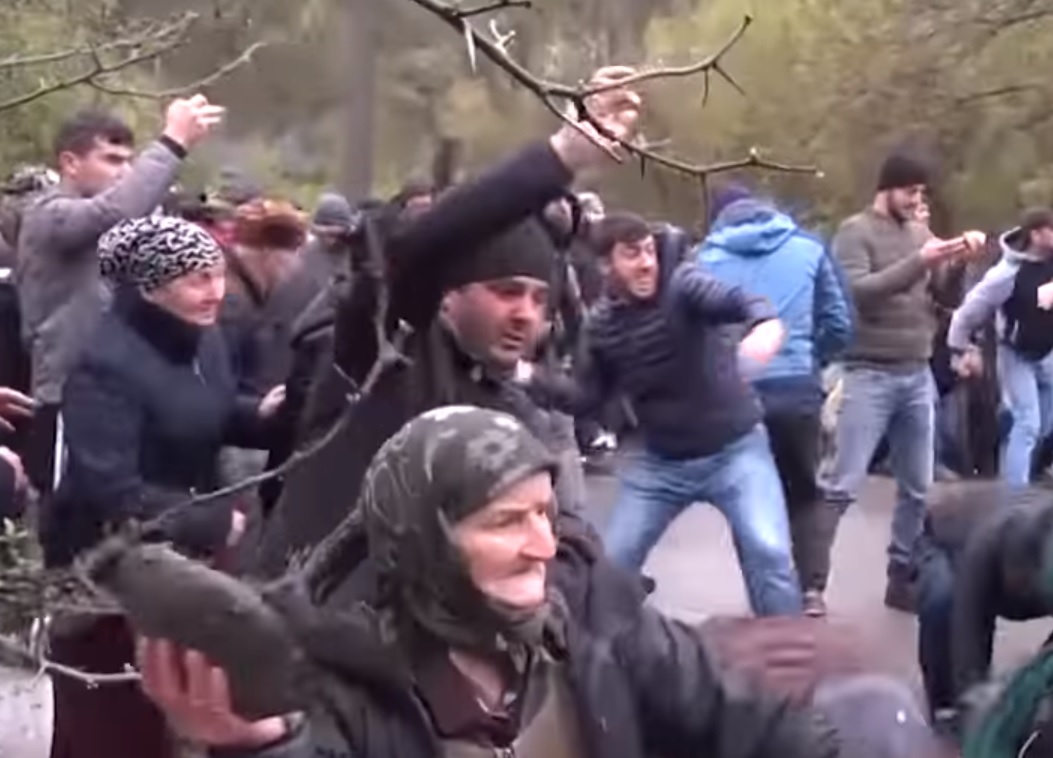 Screenshot of a TV broadcast from clashes April 21 in Georgia's Pankisi Gorge.

What began as resistance to a hydroelectric project in the remote Georgian region of Pankisi escalated on April 21 to a mass brawl between villagers and security forces, prompting fears of broader civil strife.

After riot police arrived in the area to quash protests against the plant, scores of villagers threw sticks and stones at the security forces. Police responded with tear gas and rubber bullets, and 38 police officers and 17 locals sustained injuries, according to official information.

The rest of the country watched with trepidation as the confrontation was carried live on television. The Pankisi Gorge has a reputation for defying central authorities as well as for supporting Islamic militant causes. But locals blame the authorities for the flare-up, saying that presence of the riot police to deal with peaceful protests was an unnecessary and provocative show of force.

The clashes broke out on a Sunday after locals tried to prevent a construction team from proceeding with work on a small plant, called Khadori 3, a component of a wider hydropower complex. Local residents and several environment watchdogs believe the dam projects will harm the valley’s ecosystem and restrict nearby villages’ access to water.

The confrontation swiftly descended into violence after the riot police moved in. Men, women and children, some shouting “Allahu Akbar,” pelted the troops with stones and thrashed armored police vehicles with sticks. A cloud of smoke, from tear gas and occasional Molotov cocktails, rose over the scene. At least one police car caught fire.

Police officers tried to deescalate the tension and took a deputation of locals to a nearby town for negotiations, but a fight broke out again when additional police troops arrived late in the afternoon.

Tensions subsided after Interior Minister Giorgi Gakharia arrived in the valley and held talks with residents. He delivered a conciliatory message, thanking both police for “doing their job” and village elders for exercising restraint, but also issued a warning. “Throwing stones is not an answer. Everyone who used force against law enforcement officers will be punished according to the law,” Gakharia said.

Opposition parties and many observers blasted the authorities for their ham-handed handling of the situation and the excessive use of force. “In no way we can justify the attacks on police, but … when the state conducts such a senseless operation in such a dangerous region, the responsibility fully lies with the state,” Nino Goguadze, one of the leaders of the Free Democrats party, told journalists.

Relations between Pankisi residents and the central government in Tbilisi are already strained following a 2018 anti-terror operation in the region that left a teenage boy dead. The boy’s father, Malkhaz Machalikashvili, continues to hold protests seeking justice for his son’s killers and his rallies draw support both from Pankisi and elsewhere in Georgia.

In a joint statement, several leading human rights groups criticized the deployment of special forces before exhausting peaceful means of negotiations. “In the last few weeks, during a visit by high-ranking officials … to the Pankisi Gorge, promises were made to conduct public discussions with the participation of experts. It is clear that the authorities have not kept that promise,” read a statement from the Georgian Young Lawyer’s Association, Green Alternative, and Human Rights Education and Monitoring Center (EMC).

EMC filed a lawsuit last year on behalf of Pankisi residents, requesting the revocation of an environmental permit to construct the power plant. The group insists the power plant will harm the region’s environment and the livelihoods of the local population. Green Alternative said that studies looking at the environmental impact of the plant had not been completed properly. “The environmental impact assessment document [for the plant] was… simply copy-pasted from documents done for other hydropower plants,” Manana Kochladze, the chairwoman of Green Alternative, told Achara TV.

Officials from the governing Georgian Dream party claimed that environmental worries around the power plant have been blown out of proportion. “Anytime you build something, anytime you strike a shovel on the ground and cut an earthworm, you are making an impact on the environment,” said parliamentarian Revaz Arveladze, an energy expert and member of Georgian Dream, following the events. He said the impact of the small, 5.8-megawatt power plant would be infinitesimal and not worth “all the clamor.”

Some opposition figures claimed that the authorities hurried to suppress opposition to the power plant to cater to business interests of Bidzina Ivanishvili, the billionaire Georgian Dream chairman, and his associates. “This is what happens, Mr. Bidzina, when you run a country as your personal corporation, when business interests are placed above anything else,” said Nino Burjanadze, a former speaker of parliament and leader of Democratic Movement – United Georgia.