Robotics Classes Seen as Future Boost for Armenian IT Industry 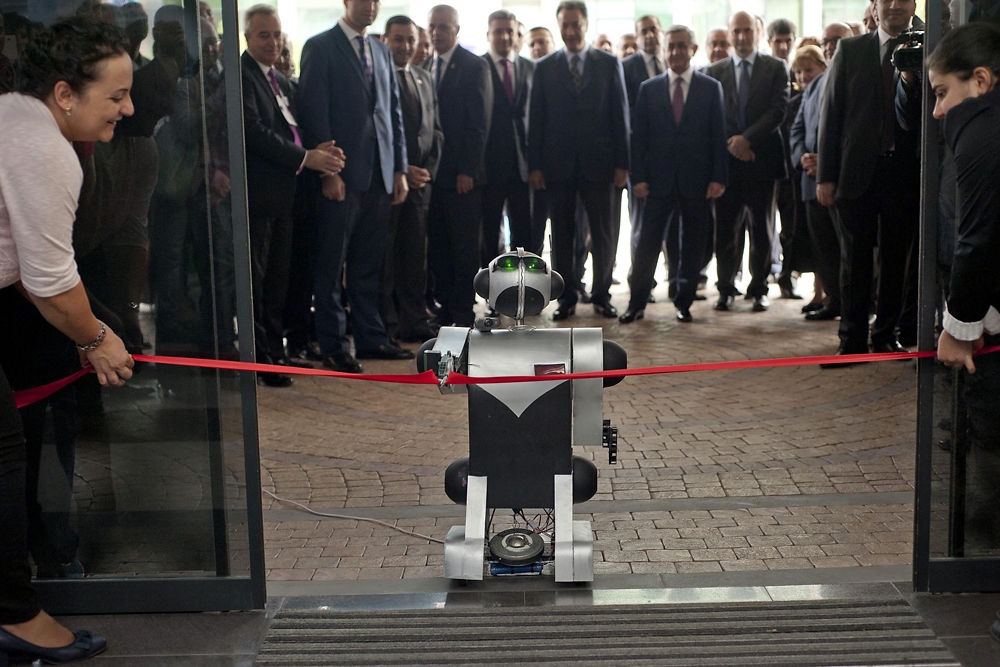 During the technological exhibition Digitec Expo 2014 held in Yerevan in early October, Armenian President Serzh Sargsyan watches a robot cut the ribbon to open the five-day event. Already a global leader in information technology, Armenia is investing into the future by opening 50 robotics classes across Armenia during the past year, with plans to launch 47 more in 2015. (Photo: Nazik Armenakyan)

It is late afternoon and the cozy school of Aygek looks as deserted as it should be after weekday classes. But one classroom in this village about 10 kilometers south of the Armenian capital, Yerevan, is buzzing with activity: about two dozen schoolchildren are using software that sets tasks for a robot they have assembled.

Nine-year-old Varuzhan is having his first day of class and he already knows what his robot should do first; “help my mom.” The non-governmental organizers of this extracurricular class, one of about 60 offered in public schools nationwide, have a more far-reaching goal – to increase dramatically the flow of skilled labor to Armenia’s burgeoning information-technology (IT) industry and other hi-tech firms. The tech sector is an economic bright spot in a country long beset by double-digit unemployment.

NGO activists are pressing the Armenian government to gradually launch such “study groups” in all of the country’s 1,400 or so public schools, including those located in remote villages often lacking basic amenities.

“Through this program we want to triple Armenia’s hi-tech engineering potential in terms of personnel,” said Karen Vardanyan, head of the Union of Information Technology Enterprises (UITE), a leading force behind robotics education. “That would create a critical mass [of skilled workers] and enable us to aspire to ranking among the most innovative countries of the world.”

Information technology is already the most dynamic sector of the Armenian economy. It has expanded by an average of 22 percent per year since 2008 and currently accounts for roughly four percent of Gross Domestic Product, according to official data. The sector, which employs over 10,000 engineers, could have expanded even faster had the quality of instruction at Armenian universities been up to speed.

The UITE had this problem in mind six years ago, when it launched its Armenian Robotics Development and Support Program, or Armrobotics. It is mainly focused on secondary and high schools. By 2010, the IT business association set up several robotics classes in Yerevan in collaboration with the Armenian branch of National Instruments, a US hi-tech heavyweight. The Austin, Texas-headquartered company provided robot kits and software.

The UITE subsequently teamed up with several other Armenian IT firms to expand the program. Their ad hoc “consortium,” called Nairi, opened 50 robotics study groups in all of Armenia’s regions outside the capital last year. It not only trained instructors, but also developed small-sized computers and software that guide robots.

In recent months, Nairi has also supplied some of those schools, including the one in Aygek, with Armenian-made 3D printers and computerized lathes that will allow students to also manufacture mechanical parts for their robots. In the past, such parts usually had to be imported. Armenia’s largest mining and mobile phone companies and the US Agency for International Development financed the purchases of equipment.

The Armenian government, for its part, started paying in September the salaries of the study group instructors, most of them schoolteachers. Prime Minister Hovik Abrahamian has stressed the importance of Armrobotics to lawmakers, describing the initiative as a way for children to develop an “engineering and systemic thinking” that can help them land IT jobs.

Education Minister Armen Ashotian likewise has praised the scheme, saying that just like chess, which has been a mandatory subject in Armenian primary schools since 2011, robotics could become another national “education brand.” A spokesperson for Ashotian, Zohrap Yeganian, told EurasiaNet.org that the government will help launch robotics courses in 47 more schools in 2015.

The UITE expects the government to go still further and finance its plans to introduce such courses in all public schools over the next four years at a projected cost of $25 million. According to one IT industry source, the government is now exploring the possibility of securing this funding from foreign donors. The education ministry has not commented.

“The UITE project would certainly be useful,” said Amalya Mkhitarian, coordinator of the Armenian National Engineering Laboratories, a state-of-the-art facility USAID and National Instruments opened at a major state-run university in Yerevan last year. Mkhitarian went on to caution that training a sufficient number of robotics instructors could be an uphill task.

The UITE’s Vardanian believes that the project, if implemented on a broad scale, will generate thousands of new IT jobs even in the short term. He claimed that half of the robotics course graduates will be qualified enough to work for hi-tech firms without receiving additional education.

Robots unveiled at annual competitions and exhibitions organized by the UITE lend credence to such upbeat statements. They have included self-propelled machines collecting garbage on the street, sweeping floors, sorting kitchen plates and cleaning windows. The robot kits provided to 700 or so schoolchildren currently involved in Armrobotics were designed for more simple tasks.

What makes robotics all the more important, according to engineering experts, is the fact that it exposes children to other IT-related activities as well. At the Aygek school class, for example, older students, between the ages of 13 and 15, are increasingly engaged in software development, ranging from web design to animation.

“It’s one step forward after robot design,” explained Shushan Grigorian, the mostly male students’ enthusiastic female instructor. “With such programming they can do anything in this area.”

One of the boys, Vazgen, has already developed a computer game and shared it with peers from around the world through a special website run by the Massachusetts Institute of Technology. Little wonder, then, that the 15 year old has no doubts about where his future lies.

“I very much want to keep doing this,” he said. “I want to make games and build robots.”

Emil Danielyan is a journalist based in Yerevan.