Rouhani Visits Baku As Azerbaijan-Iran Conflicts Fade Into Past 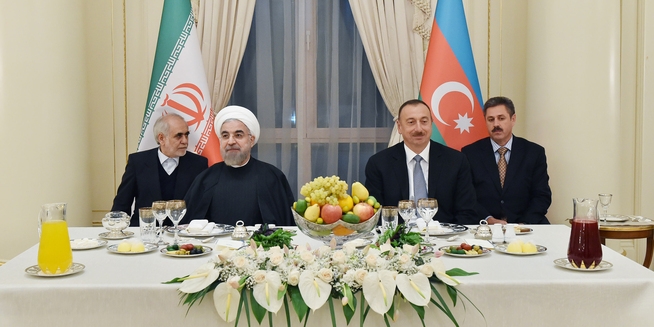 The presidents of Azerbaijan and Iran, Ilham Aliyev and Hasan Rouhani, at an official dinner in Baku. (photo: president.az)

Iran President Hasan Rouhani completed a visit to Baku, and while the two sides didn't announce anything too newsworthy, the visit underlined how tension between the two countries has considerably diminished over the course of this year.

Rouhani visited Baku November 12-13, and his delegation also included senior presidential aides and ministers of oil, foreign affairs, roads, communications and information technology and economy, as well as the governor of the Central Bank of Iran. And it followed a visit by Azerbaijan President Ilham Aliyev to Tehran in April. "Indeed, the fact that the two presidents met four times over a period of nine months was a milestone in the history of the two countries’ ties," wrote the Iranian website mehrnews.com in an analysis of Rouhani's trip.

That analysis dated the decline in the two countries' relations to what it called "the Eurovision 2012 misunderstandings," when Baku hosted the European song contest, there were rumors that a gay parade would be held in connection with that, and Iran withdrew its ambassador from Baku.

The next year saw tensions increase further, with serious border skirmishes, Tehran criticizing Baku's military ties with Israel, and Baku claiming to break up Tehran-linked terror plots. The trend looked bad enough that it made The Bug Pit's list of predictions of sources of tension to watch in 2014.

Instead, there has been a notable lack of conflict between the two countries this year. (One notable exception was the still unexplained episode in August when Iran claimed to have shot down an Israeli drone that had been launched from Azerbaijan.)

What accounts for the improved ties? Iran-Azerbaijan ties have tended to oscillate over the past 20 years, and so in part this is a natural swing back from the previous tension, Baku-based analyst Anar Valiyev told The Bug Pit. But Valiyev also noted that there are factors that could lead to a more lasting improvement in ties. The thaw between Iran and the West has made Tehran a more attractive partner for Baku; Azerbaijan also wants to patch things up in case the conflict with Armenia over Nagorno Karabakh comes to a head: "For Azerbaijan, Iran is crucial in the resolution of the Karabakh conflict. to nail down Armenia as soon as Russia is weakened in the Caucasus."

Mehrnews.com concluded its analysis: "It appears that the positive trend of their bilateral ties is irreversible, with only one way to go: to move forward." That's not what recent history suggests, but might things be turning around for good between the two countries?