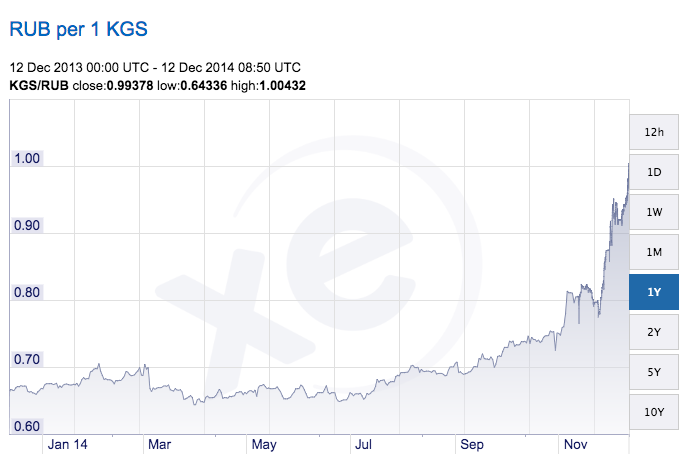 Russia's ruble became worth less than a Kyrgyz som for the first time on December 12. (xe.com)

The Russian ruble crossed a psychological barrier in Kyrgyzstan on December 12, becoming worth less than the som for the first time. Across Central Asia, the ruble’s slide is pushing local currencies to new lows. But they can’t seem to fall fast enough to keep a competitive advantage.

Central Asian economies are deeply dependent on Russia as an export market. When the ruble is weak, Central Asia’s exports are relatively expensive for Russian consumers. So, weaker local currencies benefit the region’s producers. Of course falling currencies also mean inflation, as the price of imported goods from outside the region shoots up—as does the cost of servicing foreign debt. The World Bank projects inflation in Kyrgyzstan this year to top 10 percent. In Tajikistan, food prices rose 10.5 percent in November alone, according to a Deutsche Welle report.

The ruble has broken record low after record low in recent weeks, falling on December 12 below 57 to the dollar. The plunging price of oil, and the effect of Western sanctions, are taking their toll on the Russian currency, which has lost over 40 percent against the dollar this year. In turn, the Kyrgyz som has fallen 17 percent and the Tajik somoni about 9 percent (though one can do better on the street in Dushanbe) against the greenback. Elsewhere in the region, Uzbekistan’s sum has fallen 15 percent on the black market, says a shopper in Tashkent. Turkmenistan’s manat is largely stable, managed by an opaque central bank flush with funds from the sale of gas to China.

Central banks in Kyrgyzstan and Tajikistan have eased the slides in their currencies by using limited hard currency reserves to buy som and somoni. But as Kyrgyz Prime Minister Djoomart Otorbaev told EurasiaNet.org last month, “We are not prepared to keep the som strong. The intervention is just to ease the spikes.” He said Kyrgyzstan is moving toward a free-floating exchange rate.

One thing pushing down the currencies is falling remittances from Central Asian labor migrants working in Russia. The migrants contribute the equivalent of about 30 percent of Kyrgyzstan’s GDP and about half of Tajikistan’s, according to World Bank figures. As their real wages fall (because they are earning increasingly worthless rubles), the laborers are sending home fewer dollars.

Remittances from Tajik migrant laborers fell almost 6 percent so far this year, according to the National Bank. Some analysts expect the fall in remittances to accelerate sharply as Russia’s economy enters recession. Russia is also planning to implement new regulations that will make it more expensive for Tajik and Uzbek migrants to work in Russia starting in the new year. (The region’s other big source of migrants, Kyrgyzstan, will be exempt, assuming accession to the Eurasian Union goes ahead as planned.)

Kazakhstan’s tightly controlled tenge is the currency analysts are watching most closely, because of the country’s global economic significance relative to its neighbors’. Astana devalued the tenge by 19 percent in February as Russia’s ruble started to slide. Now the tenge is worth more against the ruble than it ever has been. It is also being slammed by the rapidly falling price of oil, prompting speculation that the National Bank of Kazakhstan will be forced to let it fall abruptly again.