Rubles in the Near Abroad: Currents and currency

Georgia and Russia are about to enter some electric negotiations. This and more in our monthly Russian business bulletin. 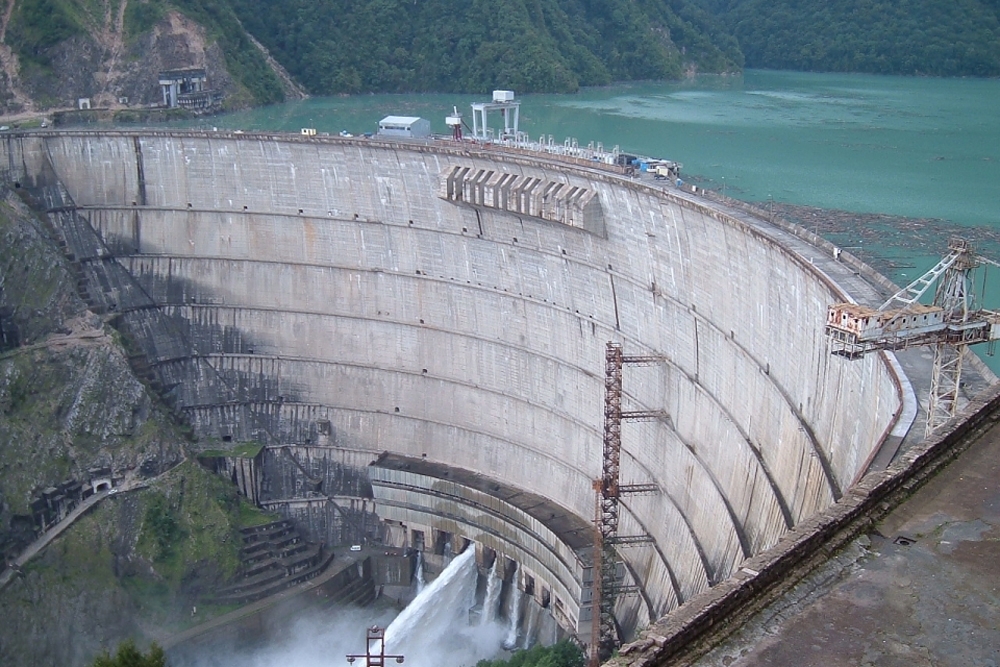 Dam the torpedoes. The Enguri hydropower plant marks the dividing line between Abkhazia and the rest of Georgia. (Georgia’s Ministry of Energy)

The Georgian government is facing a new Russian headache after Gia Khubua, technical director of the Enguri hydroelectric power plant, announced last month that the plant must be taken offline for repairs in 2021 lasting at least three months.

That work is necessary has long been known, and the European Bank for Reconstruction and Development has had 35 million euros of funding lined up for the project since 2017. But the location of the world’s tallest concrete arch dam, on the dividing line between Georgia proper and the Russia-backed breakaway statelet of Abkhazia, means that Tbilisi and Moscow, who hardly talk, now face contentious negotiations over energy supplies.

Tbilisi and the international community – bar a handful of Russian allies – regard Abkhazia as Georgian territory. After decades of hostilities over the territory, Moscow remains its economic and security lifeline. Russia’s Federal Security Service (FSB) also helps man the “border,” an area that saw clashes in the 2008 Russo-Georgian war.

However, the Enguri dam – which provides electricity to both Georgia and Abkhazia – has been arguably the most notable example of Abkhaz-Georgian cooperation. Georgia’s state-run Engurhesi electricity firm and Abkhazia’s Chernomorenergo together operate and generate power from the plant, splitting output more-or-less evenly.

The dam has been shuttered for repairs before, but the duration of the forthcoming shutdown suggests Abkhazia will need significant electricity imports. The need is exacerbated by the energy-hungry cryptocurrency industry, which the Abkhaz have alternatively boosted and attempted to constrain, on both sides of the de facto border.

If additional electricity is imported to Abkhazia to make up for any stoppage at Enguri, such supplies would be all but certain to come from Inter RAO, the Russian state electricity producer and supplier that also owns Georgian energy distributor Telasi. Were Tbilisi indirectly to subsidize these imports, that could become a political football in Georgia’s 2020 parliamentary elections.

Inter RAO's footprint in the Caucasus has grown smaller in recent years even though the Kremlin has not given up on the market, as evidenced by Russian state nuclear power firm Rosatom’s recent interest in Azerbaijan.

Inter RAO sold its subsidiary Energy Networks of Armenia to Russian-Armenian oligarch Samvel Karapetyan in 2015. The billionaire is seen as close to the Kremlin and the sale is one of many such deals in which the Kremlin has worked with friendly local businessmen to help maintain its foothold in various former Soviet republics.

Karapetyan is also seen as close to the former Armenian regime ousted last year by current Premier Nikol Pashinyan. Nonetheless, Karapetyan’s operations in the country look healthy. Sputnik reported that Pashinyan joined Karapetyan for the inauguration of the modernized Akhtanak power station in Yerevan on October 24

How the economic and political relationship with Russia will develop under Pashinyan has been a constant question since he came to power in May 2018. Though he has tactfully avoided the kind of geopolitical intrigue that threatens Moscow, the mere fact that a pro-Western activist is now running Armenia has engendered mistrust in some Russian commentators. Should Pashinyan be seen trying to move Yerevan away from Moscow, the Kremlin’s control of Gazprom Armenia gives it a way to literally turn up, or down, the heat.

In an October 29 interview with leading Russian business daily Kommersant, Pashinyan refused to give a specific number he thought would be acceptable for Armenians to pay for Russian gas, but made sure to describe ongoing negotiations as a "conversation between strategic allies."

Pashinyan also said during the interview that he would welcome Uzbekistan joining the Russia-led Eurasian Economic Union (EAEU), a talking point appreciated in Moscow even as it is clear the Uzbeks are in no hurry to sign up. On October 10, Alisher Qodirov, deputy speaker of Uzbekistan’s parliament, became the latest official to speak out against the deal in an interview with local outlet Kun.uz.

Such cooperation is deeper in neighboring Kazakhstan, a member of the EAEU. Local business news website Kursiv revealed on November 6, citing government documents, that Kazakhstan had struck a deal with Rostec subsidiary Russian Helicopters for 17 MI-8 choppers to be assembled in Kazakhstan. The contract is worth 180 billion tenge, nearly $465 million. Nur-Sultan also agreed to buy four Russian SU-30SM fighter planes the following day.

For some Russian officials, this is still not enough. On the sidelines of a Russian-Kazakh intergovernmental meeting a few weeks earlier, Russia’s Deputy Economy Minister Mikhail Babich complained to Sputnik News that bilateral trade has been largely flat, inching up just 0.8 percent year-on-year. Russian Finance Minister Anton Siluanov cited more positive trends at the same meeting, however, noting that the share of trade settled in local currencies increased to over 60 percent in the same period, in line with Russia's de-dollarization effort, and praised plans revealed by Russian billionaire Andrey Melnichenko's EuroChem earlier this year to build a fertilizer plant in Kazakhstan’s Jambyl region.

An earlier Russian investment into Kazakhstan's commodities sector came to fruition on November 6, when the Russian Copper Company launched production at its Kundyzdy deposit in Aktobe province. A day later Kazakh President Kassym-Jomart Tokayev and his Russian counterpart, Vladimir Putin, met at another summit, where they signed a package of deals aimed at enhancing trade between regions along their mutual border.

Such border agreements typically mean little on the ground. At last year’s forum, Tokayev’s predecessor-cum-superior, Nursultan Nazarbayev, announced plans that should have had a tangible impact on local residents: the construction of new access roads for freight trucks crossing the border between the North Kazakhstan and Omsk regions. Kursiv reported on October 18 that, a year later, work had only begun around a single checkpoint.