Rubles in the Near Abroad: Eurasian economic disunion

Even with coronavirus serving as a belated impetus to push through long-stalled reforms, the five members of the Eurasian Economic Union show limited willingness to help each other. 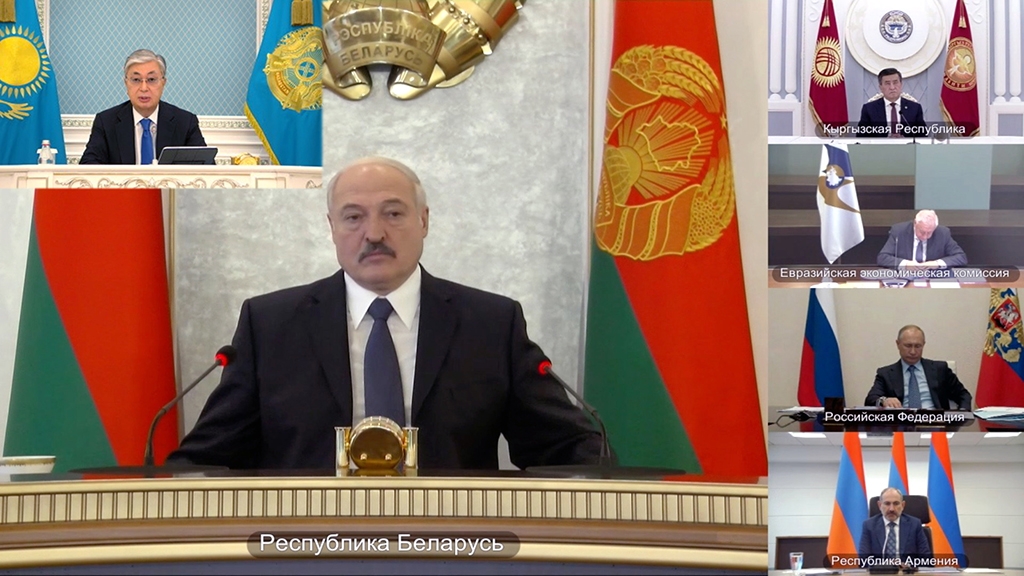 Each unhappy family is unhappy in its own way. (Eurasian Commission)

In a crisis, an organization can shine – or its structural weaknesses can become impossible to hide.

The Eurasian Economic Union (EAEU) has taken a number of measures to combat the coronavirus pandemic and its economic impact. But even with the virus serving as a belated impetus to push through long-stalled reforms, the five members of the Moscow-led trade bloc show limited willingness to help each other.

On April 10 the EAEU’s governing body approved a plan to temporarily nullify customs duties and simplify declaration procedures for importing critical goods, including most agricultural staples and some medical supplies. The duty-free regime will run until the end of June; till September 30 for the medical products.

“Critical goods” includes medical face masks, the cause of some rancor at the Kazakh-Russian border. On April 16 Kazakhstan’s border guards said they had prevented 400,000 masks from being exported to Russia illegally. Two weeks later, a million masks appeared disguised as consumer goods on a truck heading to Russia. Nur-Sultan had banned the export of masks in February – even to its partners in the Eurasian Union.

Russia has continued to supply COVID-19 tests to EAEU members, however, with consumer rights watchdog Rospetrebnadzor announcing on April 14 that it had delivered some 70,000 more tests to the bloc.

Moscow has also signaled it will prioritize EAEU allies with food provision, announcing on April 26 that exports of wheat, rye, barley and corn to countries outside the Union would be suspended until July 1. The Kremlin had imposed grain export quotas through June, though analysts cited by Reuters believe the quotas would not significantly impede exports. Just in case, Georgia – which imports the vast majority of its wheat from Russia – has already signed an agreement to import 27,000 tons of American grain at the end of May.

Meanwhile, the EAEU has been reviewing its own internal cross-border rules, acknowledging in its annual report that significant problems remain with dumping and other forms of unfair competition. The bloc has also caught up on some previously agreed tariff reforms, announcing on April 21 that it had finalized a plan for the creation of joint customs declaration documents.

Yet these technical moves, fraught with legalistic jargon, belie fundamental internal tensions. “The Eurasian Union is clearly suffering from a lack of leadership,” said a May 4 briefing by the Finnish Institute of International Affairs. “The pandemic has demonstrated the weakness and limited relevance of the EAEU in terms of its ability to help Russia’s partners withstand the most urgent challenges of the day, be they of epidemiological or economic origin.”

During an April 14 video conference, Belarusian President Alexander Lukashenko warned the EAEU could collapse if it failed to respond jointly to COVID-19.

A fundamental tension within the EAEU is the fact that its two largest members (Russia and Kazakhstan) are major energy exporters, while the smaller members (Armenia, Belarus and Kyrgyzstan) are heavily dependent on energy imports.

As energy prices probe a modern nadir thanks to the pandemic’s stranglehold on global economic activity, the smaller members are looking for help.

In Armenia, though, where Gazprom owns the gas pipeline network and is the country’s biggest taxpayer, the Russian state energy giant wants to raise prices. The same is happening in Kyrgyzstan, where Gazprom announced on April 13 that it would increase prices 14-15 percent for businesses and residential customers, blaming the rising value of the dollar. Belarus, too, is seeking lower prices, an Energy Ministry spokesman said on April 29, the same day Russian Energy Minister Aleksander Novak ruled out a price cut this year

As these disputes reverberate across the former Soviet Union, on April 28 the lower house of Uzbekistan’s parliament approved a motion to seek observer status in the EAEU by a vote of 96 to 32, with 14 abstentions. The motion must still be approved by the upper house and then signed by President Shavkat Mirziyoyev.

Observer status will change little for Tashkent, though it may be a precursor to seeking full membership or potentially a free-trade pact.

For EAEU members like Armenia and Kyrgyzstan – and other poor post-Soviet republics like Tajikistan and Uzbekistan – Russia's economic slowdown means remittances, a vital economic crutch, are plummeting. According to an April 7 report from Russian business outlet RBC, money transfer company Unistream saw transfers from Russia fall 35 percent year-on-year in March while Russia's Golden Crown, also known as KoronaPay, reported that remittances had fallen 30 percent in March and were expected to be down as much as 50 percent year-on-year in April.