The opposition says the results were “totally rigged” and that it was taking its fight to the streets with a series of demonstrations. 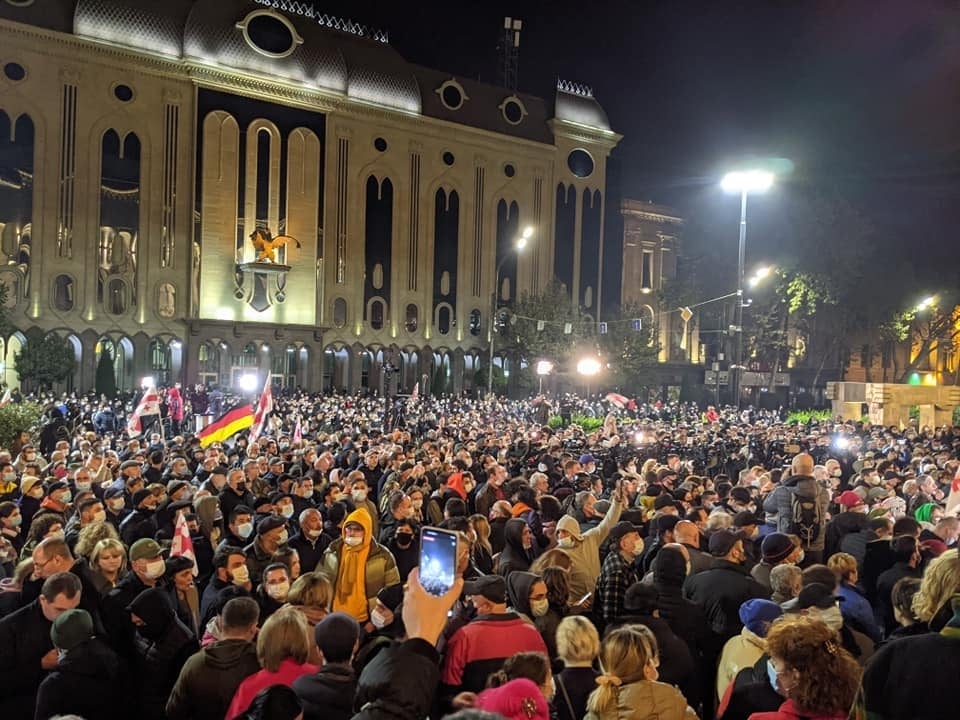 Opposition supporters rally on October 31 against what they claimed were fraudulent election results. (photo: UNM, Facebook)

Georgia’s ruling party nearly swept local elections across the country, a result that the opposition called fraudulent and vowed to protest.

In runoff votes on October 30, candidates from the ruling Georgian Dream party won 19 of the 20 mayoral races, including in all the country’s biggest cities. The results were a setback for the opposition, which had appeared within reach of winning some key races, including in the capital, Tbilisi.

Nika Melia, the head of the main opposition party United National Movement and its candidate for the mayor of Tbilisi, called the results “totally rigged.” He addressed supporters at a rally in front of the country’s parliament building on the evening of October 31 after the official vote tallies were announced. “We don’t accept these results,” he said. UNM and other opposition parties said they would hold a large protest in Tbilisi on November 6.

International observers gave the October 30 vote a mixed assessment. The European Union said the elections were “were generally well administered and that the campaign was competitive” but that problems identified in the first round, especially excessively harsh rhetoric, voter intimidation, and use of government power for the ruling party’s advantage, had only gotten worse in the second round.

Some local election watchdogs went farther, suggesting that the violations recorded on election day may have tipped the balance for Georgian Dream in tight races. The irregularities “might have had a serious impact on … the final results of the elections,” the NGO Transparency International said in a statement. “Therefore, the public could have legitimate questions with regards to the overall fairness of the elections.”

Giorgi Gakharia, who until his resignation earlier this year was the prime minister and a Georgian Dream member, tweeted that “[t]hese elections were neither free, nor fair.” After resigning Gakharia formed a new political party, For Georgia, and ran for mayor of Tbilisi but finished a distant third. In the runoff, he declined to endorse either Melia or the Georgian Dream incumbent, Kakha Kaladze. “We need to seriously think about the use of money and abuse of administrative resources in the elections. Political neutrality of public sector has to be guaranteed. Otherwise, voting risks becoming a meaningless show,” Gakharia wrote.

Opposition leaders said they would contest some of the results in courts, but the focus now appears to be on the streets. "We are moving to a new stage of the battle and this battle will not be easy," said Zaal Udumashvili, a UNM member.

Opposition rallies will be held in Batumi on November 2 and then in Tbilisi on November 6, a Saturday. That demonstration will be “different from other rallies in many regards,” Melia said, reported Civil.ge. Melia added that he hoped turnout would be much greater than at a rally ahead of the election in support of UNM’s de facto leader, former president Mikheil Saakashvili, who is in jail on a variety of charges related to his time in office.

The Tbilisi rally was initially announced for November 7, a day that is notorious in Georgia as the anniversary of a violent crackdown on protests in 2007 by the government, then headed by the UNM. Opposition leaders later said it would be instead on November 6.