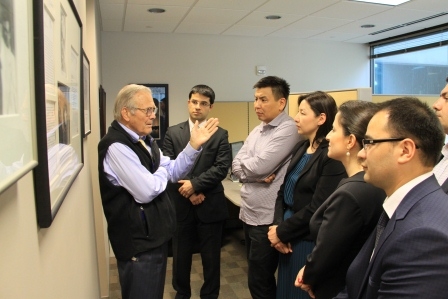 Former U.S. Secretary of Defense Donald Rumsfeld with the Spring 2013 class of Rumsfeld Fellows from the Caucasus and Central Asia. (photo: Rumsfeld Foundation)

The story of yesterday's parliamentary vote in Kyrgyzstan to annul the lease of the U.S. air base there included an intriguing subplot: the presence of ex-U.S. Secretary of Defense Donald Rumsfeld in Bishkek. Officially, he was there on the business of the Rumsfeld Foundation, a group that offers short-term fellowships to young scholars from Central Asia and the Caucasus to study in Washington, D.C. And the timing of the visit, at the same time as the parliamentary vote, was just a coincidence.

But as anyone following Central Asian politics knows, there is no such thing as coincidence. And the Kyrgyzstan and Russian press has been rife with speculation about what Rumsfeld's real agenda was in Bishkek. From FerganaNews:

"The goal of Rumsfeld's visit, obviously, is to conduct informal meetings with political groups making the decision about the base," said a Fergana source close to government circles. Regardless of the fact that Rumsfled is not appearing in an official capacity as a U.S. government representative, he moves around Bishkek in an embassy car with the flag of the United States. According to Fergana's information, Wednesday evening Rumsfeld already conducted a series of meetings in the elite cottages of Ala-Archa 2, location of the mansions of nearly every representative of the Kyrgyz elite, from criminal authorities to the highest-ranking officials.

Rumsfeld's visit must be understood in the context of the situation around Manas... Most likely, the talks were conducted with various political powers in Kyrgyzstan. Whatever the outcome of Rumsfeld's visit, it will seriously affect the further development of the current situation, in Central Asia as well as in Kyrgyzstan.

Experts fear that Rumsfeld may begin blackmail of Kyrgyzstan's leadership with kompromat mined from the exiled son of the ex-president, Maxim Bakiyev, so that the strategically important Manas Transit Center can remain.

So is any of this plausible? The fiercely partisan Rumsfeld would be an unlikely envoy for the Obama administration; recently Rumsfeld was quoted as saying that he "can't tell" if Obama wants the terrorists to win the war on terror. And it doesn't seem that Rumsfeld has been doing any of the sort of envoying that former statesmen often do when they leave office. But given the emphasis that Rumsfeld has placed on Central Asia in his post-government career, it's likely he believes that a U.S. military presence in Central Asia is an issue that transcends partisan boundaries and in which he is particularly interested. Although Rumsfeld's visit was unofficial (confirmed to The Bug Pit by the U.S. embassy in Bishkek) it seems unlikely he wouldn't have met with any government officials, and if he did, it seems impossible to believe that the subject of Manas didn't come up. (And Rumsfeld reportedly informally greeted airmen at Manas, which is again hardly surprising.)  If Rumsfeld was in fact in Bishkek to lobby for Manas, it didn't seem to help. The vote was a resounding defeat for Manas: 91 members of parliament voted to annul the agreement, and only five voted to extend it. In any case, this is far from the final word on the subject -- the lease was scheduled to expire anyway next year. It's certainly a strong statement of the political unpopularity of Manas, but there are no doubt a lot of negotiations still to come.

Update: I heard from someone traveling with Rumsfeld, who clarifies that the former secretary "did not meet ANY KG officials. His only event in Bishkek besides sightseeing was a small roundtable at the American University in Central Asia (AUCA) with faculty and students mostly to discuss his new book "Rumsfeld Rules.'" My source also points out that Rumsfeld did not in fact travel in a diplomatic car, that the same evening he had dinner at Ala Archa the U.S. ambassador had a separate event there, possibly leading to the confusion.