Fighters warm up at the Aykol Manas Fight Club in Moscow. Most of the 60 club members are Kyrgyz, but other nationalities, especially those from Central Asia, are welcome. Many say they are training for self-defense, since harassment against labor migrants is rampant in Russia. "The fighter should fight in a ring, not on the street,” Amirdanov, the trainer, says. Sweat coats a wrestlers back during the training session. The club is named "Manas the Magnanimous" after the Kyrgyz mythic hero. The members train and compete in kickboxing, M1 mix fighting, and wrestling. All fighters use plastic guards to protect their teeth. 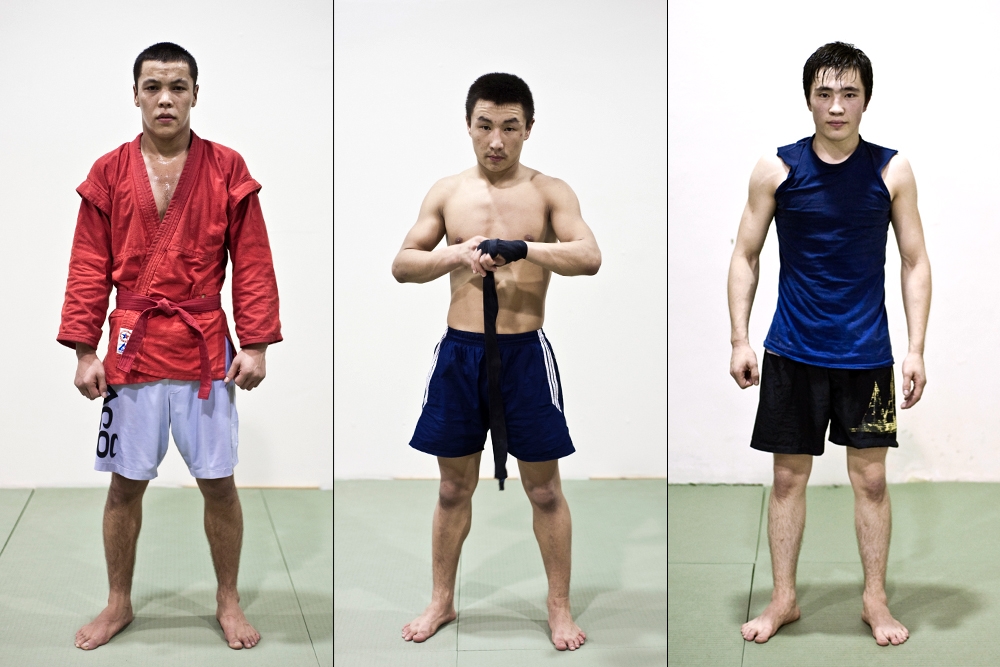 After warming up fighters split up to wrestle in pairs. Club members watch a coach show how to hold an opponent. A pair of fighters rests during a lull in the practice. Kaada Mamatkulova (center), an assistant chef at a café from Osh, Kyrgyzstan, is one of the few female fighters. Fighters practice stressful and painful holds on each other. Abay Jamshedbek, 19, is one of the club’s most-promising SAMBO and MMA fighters. SAMBO, a Russian combat sport, is an acronym for the Russian “self-defense without weapons." The fighters warm up at the beginning of the training. A wrestler grimaces in pain as another member pins him to the mat. The club first trained in an industrial part of Moscow’s Donskoye region, but later moved near the Sav'olovsky subway station. Many of the fighters compete in regular tournaments such as Moscow’s Fight Nights.
prev
next

Central Asian migrant workers in Russia are dealing with tough times. So it’s no surprise that those working out at a mixed martial arts gym in an industrial part of Moscow’s Donskoy District are getting tough – and most say they’re training for self-defense.

Ask one of the million-plus Central Asian labor migrants in the Russian capital and chances are he or she will say it’s prudent to maintain a low profile. Harassed by police and nationalist groups, threatened with deportation or police shake-downs, and subject to scorn from populist politicians, Central Asian labor migrants are easy targets for Russians venting frustration with their own inefficient government. Under such circumstances, it’s not unusual for citizens of a far-off country to hang out together and help each other.

At the Aykol Manas Fight Club, named after the Kyrgyz mythic hero (“Manas the Magnanimous”), most of the members hail from Kyrgyzstan. Founder and head trainer Nurgazy Amirakulov welcomes a Russian photographer, but implores him: “Please, do not report that this is a training camp for Kyrgyz Islamic terrorists, as one Russian TV channel did. Here we not only have Kyrgyz, but also Uzbeks, Russians, Dagestanis, etc. And we are athletes, not terrorists.”

The men working out say they have built a social network in this giant city far from home and enjoy spending their free time together. They’re eager to invite anyone who’s interested to join them and, indeed, a Russian from the Fergana Valley says he feels welcome.

Amirakulov, who came to Moscow from Osh 13 years ago, started off working as a trader at a market, then as a restaurant security guard. In the early 2000s, he was a semi-professional mixed martial arts fighter until a stabbing ended his fighting career. He became a mixed martial arts trainer and a teacher of the Russian combat sport SAMBO, an acronym for the Russian, “self-defense without weapons.”

Nineteen-year-old Abay Jamshedbek uulu is one of the club’s most-promising SAMBO fighters. He credits his success to Amirakulov, whom he reveres like a father. “He has changed my life dramatically. He took me from the street and brought here to train and become an athlete, kept me from wasting my time smoking and drinking. He saved me from petty crime. The club is like my family now; they’re like my brothers,” Jamshedbek uulu says. He adds that the skills he’s perfecting are useful in Moscow, where several times he’s had to protect himself from “some drunks” on the street.

Several young women also train at Aykol Manas. Kaada Mamatkulova, an assistant chef at a café, who won second place in a local Burmese boxing (lethwei) championship this year, used to practice karate at home in Osh. She was inspired to train after some girls beat her up inside a bus station at home.

Amirakulov ensures his trainees have an outlet to show off their skills, leading them to regular tournaments such as Moscow’s Fight Nights. “The fighter should fight in a ring, not on the street,” he says.