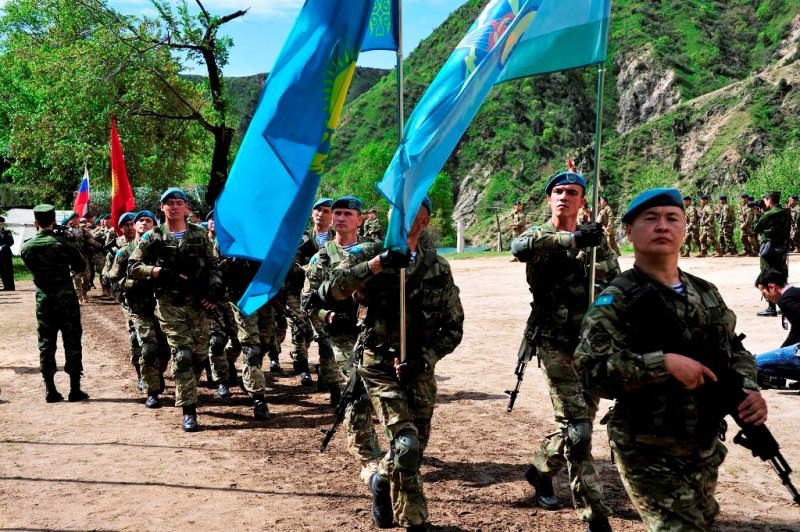 Russia and several of its allies have wrapped up their first-ever joint military reconnaissance exercises in Tajikistan where they "eliminated" a make-believe ISIS commander who was plotting to seize power in Central Asia.

The exercises took place in Tajikistan's Romit Gorge, where -- incidentally -- Tajikistan security forces last year killed a rogue general who had mutinied and whom Dushanbe (unconvincingly) claimed was part of ISIS. They involved 1,500 military intelligence officers from Russia and its allies in the Collective Security Treaty Organization -- Armenia, Belarus, Kazakhstan, Kyrgyzstan, and Tajikistan.

The primary purpose of the exercise seemed to be to work out joint operations of the CSTO countries' reconnaissance units and equipment (i.e. the forces that allow armed forces to locate and target enemy units). In one phase, for example, helicopter crews dropped paratroopers close to enemy formations and cut off their lines of communication. In another, they used their electronic reconnaissance equipment to target enemy communications points.

The scenario of the exercise offered ample fodder for cultural and political interpretation. The fictitious state to whose aid the CSTO was coming was "Turan," clearly standing in for Tajikistan. While Turan is an old Iranian word for Central Asia, it's most commonly used today in pan-Turkic contexts (one can imagine various, but all strong, reasons why that wouldn't thrill the Armenians, Russians, or Tajiks). In one phase of the exercise, field commanders from "Afghania, Pakia, and Sogdia" held a shura to discuss the seizure of power in "Turan." The stand-in for Kyrgyzstan is "Kyzylstan," far from the first time the name for that country has been mangled.

The role of the ISIS commanders was played by Tajikistan OMON special police offiers. It's not clear whether this was an intentional reference to the fact that the former commander of Tajikistan's OMON did in fact defect to ISIS, but Sputnik did report that the Tajik officers were "excellent" in that role.

Tajikistani officers used the event, and the substantial Russian media coverage of it, to advocate for more Russian aid to their country, which they portrayed as being under seige from radical Islamists. One anonymous "high-ranking official of Tajikistan's security structures" told Kommersant that they have in recent times arrested 200 people who have returned from Syria, and another official (OMON chief Khurshed Mukhammadzoda) that groups of 100-150 fighters have repeatedly made incursions from Afghanistan into Tajikistan. If true, that's the first time either of these claims has been reported.

While Tajikistan has been promised $1 billion in Russian military aid, "no one in the country has seen that money," an unidentified source from Tajikistan's security structures complained. "They [Russians] treat us like second-class people... if we are CSTO allies, if you acknowledge that we are Russia's southernmost bulwark against drug traffickers and terrorists, then let's cooperate normally. They look at us like panhandlers, who are begging for guns and ammunition. But we're not shooting birds with that ammunition, we're defending them."

Meanwhile, anonymous Tajiks also warned Russia that the U.S. and China were preparing to take their place, noting that both have recently given aid of vehicles and weapons. (And, Kommersant reports, "Representatives of the security structures of Tajikistan are convinced that, in parallel, the U.S. is also giving aid to Islamist radicals on that side of the Afghan border.")

"I fear for the next generation," concluded a "Tajik officer" to Kommersant, "who will not think of themselves as part of the Russian space, but for whom the main authorities could be the Americans and the Arabs."