Russia and Kazakhstan: What’s Behind the Baikonur Spat? 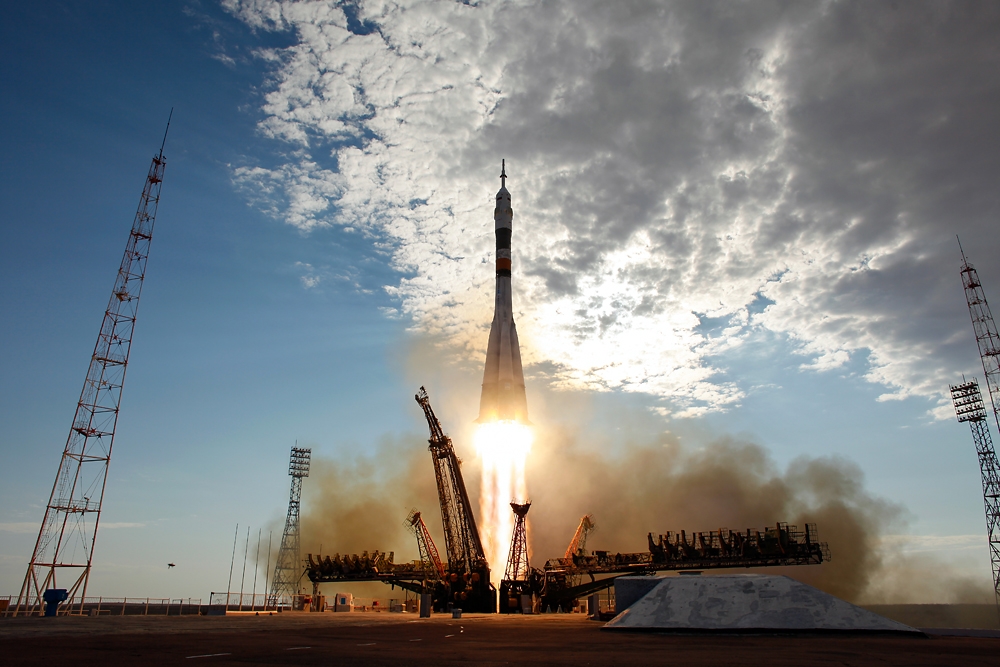 A Soyuz TMA-05M rocket launches from the Baikonur Cosmodrome in July 2012, en route to the to the International Space Station with three astronauts. (Photo: NASA/Carla Cioffi)

Russia and Kazakhstan seem headed for a showdown over rocket launches at the Baikonur cosmodrome. Although Moscow and Astana are trying to downplay their differences, both sides seem ready to play hardball in what could be complicated and protracted negotiations.

Environmental concerns are ostensibly the catalyst for the discussions. But an important subtext is sovereignty over the Baikonur launch site, which is situated in northern Kazakhstan, but leased by Russia through 2050. And even though both nations are energy-rich, money too is an issue.

Russia’s use of Proton-M rockets will figure prominently in the negotiations. The Proton class was first introduced in 1965, and since then it has proven one of the most successful booster rockets in the history of commercial aerospace operations, a workhorse for placing 3-ton satellites in geostationary orbits. But critics assert the fuel used to power Protons, known as UDMH, is highly toxic and can cause acid rain. Some also contend it is a carcinogen that has been linked to cancers in humans. Russian space officials dispute such assertions.

Discord over Baikonur first surfaced at the end of 2012, when Talgat Musabayev, the head of KazCosmos, the Kazakhstani Space Agency, announced that Kazakhstan may want to renegotiate the lease terms. Otherwise, he suggested, Kazakhstan could abrogate the existing pact and reassert its sovereign control over the facility. Russia has held an exclusive lease on Baikonur since 1994, paying $115 million per year in rent. Russia also contributes 1.16 billion rubles, or about $38.5 million, per year to the surrounding city of Baikonur. The Baikonur concession is considered a federal entity within the Russian Federation, possessing the same status as Moscow and St. Petersburg.

Speaking to the lower house of Kazakhstan’s parliament, Musabayev hinted that the desire to revisit the agreement was President Nursultan Nazarbayev’s idea. The space agency head cited a directive in which the “head of state [Nazarbayev] has put this goal in front of us after discussing this question with [Russian leader Vladimir] Putin.”

Musabayev, assured that major changes to the current Baikonur agreement would happen only gradually. But he also cautioned that KazCosmos planned to curtail the number of Proton-M rocket launches in 2013. The Proton-M has experienced several launch failures since 2011, raising construction quality concerns among aerospace analysts.

On January 16, Kazakhstan, citing environmental concerns, formally announced a new, curtailed schedule for the Proton-M, reducing the number of launches in 2013 to 12 from 14 the previous year. Russia had sought 17 Proton-M launches this year. The announcement came just a day after Russia unveiled a commitment of 2.1 trillion rubles, or roughly $103 billion, over the next eight years to develop its space industry.

Intertwined with the wrangling over Proton-M launches is the matter of stalled construction of a new launch complex at Baikonur. The project, a joint Russian-Kazakhstani venture, is called Bayterek, the Kazakhstani term for poplar tree. Russia and Kazakhstan agreed back in 2004 to build Bayterek, which would be designed to handle a new generation of commercial satellite boosters, dubbed the Angara. Once operational, the Angara rocket is expected to be more environmentally friendly, lighter and capable of carrying heavier payloads. For fuel, it would burn a cleaner mix of kerosene and liquid oxygen.

Although in the works for almost a decade, the Bayterek initiative remains on the drawing board. According to a report distributed by the Russian news website Lenta.ru, the chief hang-up is Russia’s unwillingness to contribute $800 million toward the development of advanced launch technology. “According to plans, the complex is meant for the commercial use of Angara carriers, the price was earlier assessed at $1.6 billion, which both sides would share on an equal basis,” a columnist wrote on Lenta on December 10.

This winter, both, Kazakhstani and Russian press carried reports that the Bayterek project may be altered to accommodate a different kind of rocket type, the Zenit, in order to cut costs. The reports also quoted Musabayev as saying the projected costs for the project had ballooned since its inception.

While $800 million might not seem that imposing a figure within the context of its planned $100-billion- plus outlay on space ventures, the Kremlin has made no secret of a desire to reduce its near-total dependency on Baikonur at present, and instead boost its capacity to launch commercial projects from Russia proper. Currently, Russia is working to upgrade an existing launch site at Plesetsk, north of St. Petersburg, and develop a whole new space center, called Vostochniy, in eastern Siberia’s Amur Region. Work on Vostochniy began in 2011, and it is currently slated for completion in 2018.

The Vostochniy project is criticized in some circles as a fiscal sink-hole, and a few observers in Russia even dub it a “dolgostroi,” a derisive reference to grandiose and wasteful construction projects undertaken during the late Soviet era. Meanwhile, there have been reports of funding shortages delaying efforts to refurbish Plesetsk. Given the Russian budget’s dependency on energy-export revenue, the Kremlin’s ability to finance its space plans will be tied to the global price for oil, which was on a downward trend in late 2012 and remains relatively flat so far this year.

A report published last October in the Kremlin-affiliated Izvestia newspaper suggested that Russia is blaming Kazakhstan for cost overruns on the Bayterek project. The article went on to say Russia wants Kazakhstan to pick up the bill for Bayterek’s construction, while Moscow continues to develop and build the Angara rocket class.

As the two sides sit down at the negotiating table, each will have leverage, as well as vulnerabilities. Russia, of course, is sure to cite the fact that it has options other than Baikonur. In addition to the planned Russian sites, Moscow is already using a French and European spaceport near Kourou, French Guiana, for some satellite launches. At the same time, lingering uncertainties surrounding the Plesetsk and Vostochniy facilities raise the question of whether they would be sufficiently profitable to offset Russia’s possible cessation of operations at Baikonur.

Kazakhstan, meanwhile, hopes to take advantage of the fact that Russia currently depends on Baikonur. But Kazakhstani officials also are taking a risk that if they aren’t flexible enough, and Russian alternatives pan out, then Baikonur could be rendered a dinosaur.

Shortly after Kazakhstan imposed a cap on Proton launches, the Russian Foreign Ministry hinted that Moscow might quit Baikonur, rather than give in to Kazakhstani demands.

The respective foreign ministers of Russia and Kazakhstan, Sergei Lavrov and Erlan Idrisov, met January 25, with both vowing that there were no substantial differences between the two countries on the Baikonur issue. But at least one anonymous Russian diplomat, cited January 26 in the Russian business daily Kommersant, thinks otherwise: “The negotiations will not be simple,” the diplomat said. “We don’t want to mar our relationship with our Kazakhstani colleagues, but we also will not allow them to spoil our lives.”