Politicians in Moscow claim to be concerned that Russian-speaking citizens may be facing intimidation and aggression in Kyrgyzstan – a fact that officials in Bishkek deny. 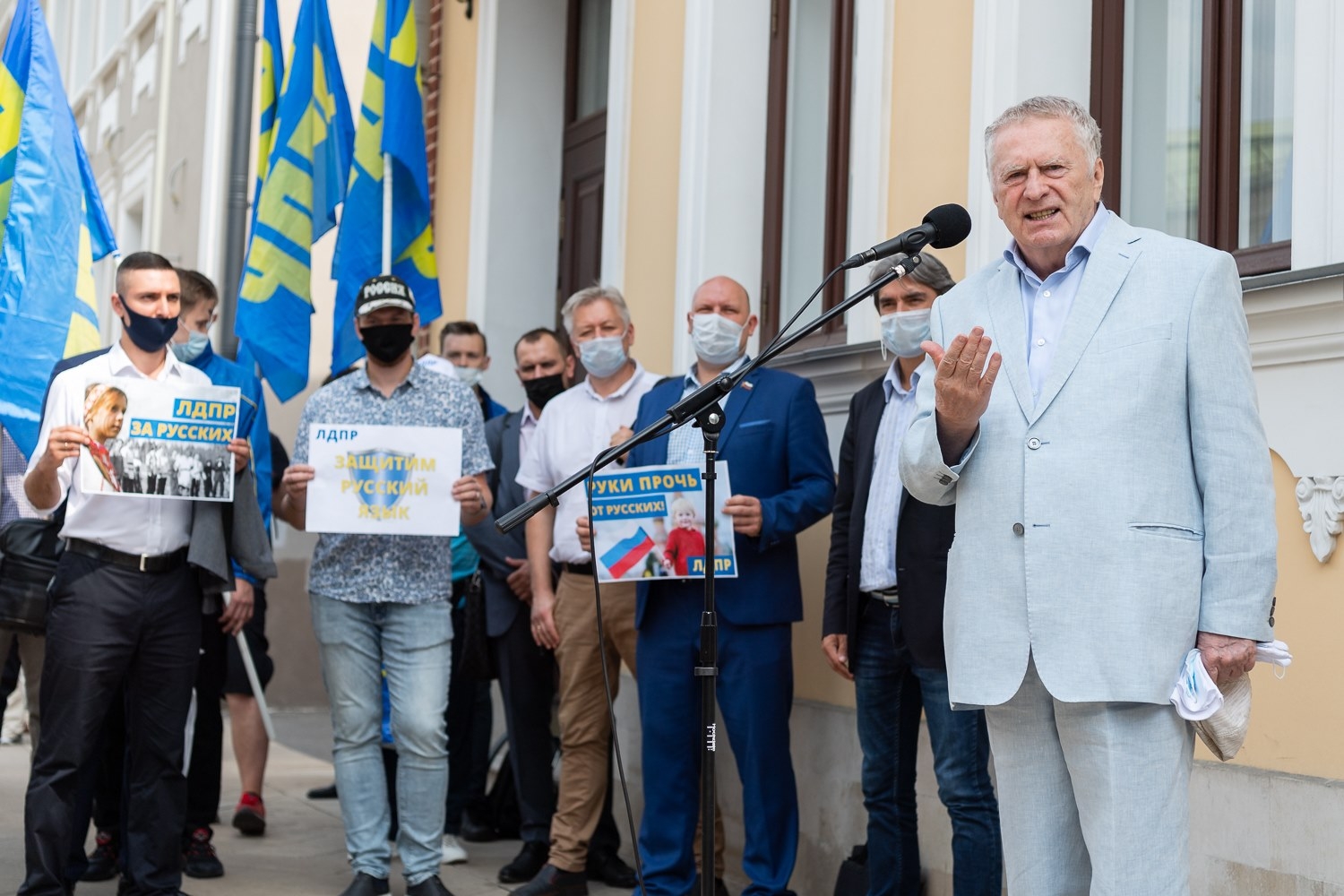 Ultranationalist firebrand and Kremlin loyalist Vladimir Zhirinovsky leads a picket on August 10 in front of the Kyrgyz Embassy in Moscow. (LDPR)

It began as a moment of nastiness between a sales assistant and a shopper at a games park in Kyrgyzstan’s capital. It has now escalated into an international incident.

The brief episode was captured on August 2 by a surveillance camera: A beefy Kyrgyz man glares at the young Slavic woman behind the counter. Suddenly, he snatches her calculator and flings it directly at her face. Later reporting on the attack revealed that the man was incensed that the woman insisted on speaking in Russian, rather than Kyrgyz.

The spread of the clip across social media has sparked heated debate about who was in the right. One camp contends the man had no right to behave as he did. Others chide the woman for her inability – or unwillingness – to speak in Kyrgyz.

Prominent politicians in Moscow are wading in too, claiming to be concerned that Russian-speaking citizens may be facing intimidation and aggression in Kyrgyzstan – a fact that officials in Bishkek deny. State Duma deputies have alluded to another case in a formal complaint to their Kyrgyz counterparts.

In late June, a nine-year-old boy was beaten up at a sports training camp in the Issyk-Kul region in what has been described as an assault based on “ethnic and religious grounds.”

“[The boy’s] parents found bruises and abrasions to his face, as well as mild wounds to his lower lip,” Indira Sautova, a lawyer for the family, told Eurasianet. “The coach told them that their child had got into a fight with some boys.”

The family later withdrew its criminal complaint after receiving apologies from the attackers and their parents.

That did not deter Duma speaker Vyacheslav Volodin from announcing on August 9 that the Russian legislature was appealing directly for the chairman of the Jogorku Kenesh, as the Kyrgyz parliament is known, to personally monitor the situation.

“This is not the first such incident. It is unacceptable considering that Russian in Kyrgyzstan carries official status,” Volodin wrote. “MPs are considering a response, which could include a ban on entry into Russia for anybody behaving in this way toward Russian-speaking residents [of Kyrgyzstan].”

An even more violent reaction has come from ultranationalist firebrand and Kremlin loyalist Vladimir Zhirinovsky, who led a picket on August 10 in front of the Kyrgyz Embassy in Moscow.

“Russians have for centuries, often at their own detriment, developed their periphery, built cities and enterprises, and brought enlightenment to Central Asia. Even today, hundreds of thousands of Kyrgyz families live off earnings in Russia,” he told the crowd. “Our patience is running out. We will demand a reduction in the number of Kyrgyz workers in Russia.”

There is alarm among some, like Kyrgyz MP Dastan Bekeshev, that the whole affair has become excessively politicized.

“As far as the Russian language goes, it should retain its official status, since we have many Russian speakers here, as well as many citizens who go to Russia for study and work,” he told Eurasianet.

And rights activist Rita Karasartova said in an interview to Eurasianet that continuing to dwell on this topic only threatens to further sour interethnic ties in Kyrgyzstan. The whole problem has, in any case, been framed back to front, she argued.

“Non-ethnic Kyrgyz people do not make an effort to learn the state language because they know that Russian is an official language, and they speak Russian fluently. And as experience shows, these incidents occur specifically because one side is unable to speak Kyrgyz,” she said.

Edir Bova, an ethnic Dungan activist residing in Bishkek, told Eurasianet that it was only natural that Kyrgyz nationals should know the country’s language to some extent, especially if they are working in the service sector.

“Many are unable to learn Kyrgyz because of a lack of the language around them, considering that in Bishkek almost everybody can speak Russian. And then sometimes Kyrgyz people come in from the villages, they cannot speak [Russian], and when they run into the fact that everybody in the capital does speak Russian, it cannot but anger them,” he said.

Bova did rue, however, the fact that the state is falling short in its duty to promote Kyrgyz. Curious language-learners are able, for example, to find Chinese and Korean courses free of charge, but no such option exists for Kyrgyz.

“That’s not the only thing discouraging study of the state language. The lack of high-quality teaching aids for Kyrgyz is also hindering its development. The government needs to allocate sufficient funds for this,” he said.

Daanakan Kurmanbekova, 57, said she and her family found the language barrier made it difficult to adapt when they moved to Bishkek from the southern town of Batken seven years ago.

“I understand that the Russian language can give access to a good education, but we must not forget that we are Kyrgyz,” she said. “It is only in Kyrgyzstan that Russian operates at an equal level to our native language. You don’t have that in other Central Asian nations, let alone the Caucasus or the Baltics.”

The noise around this scandal has a whiff of artificiality about it, though. Bekeshev suggested that Russian politicians may have their thoughts on the September 17 Duma elections as they play the nationalist card.

At the same time, another Kyrgyz lawmaker, Irina Karamushkina, says a conversation is needed around the status of ethnic minorities. The seeds of a minorities problem were planted, she said, with the adoption in 2013 of a document titled Concept for the Development of National Unity and Ethnic Relations in the Kyrgyz Republic. In substance, the document formalized the idea that Kyrgyzstan’s citizens were organized into a “titular ethnicity” and “ethnic minorities.”

“Until that moment, we all felt like full-fledged citizens. We lived, had our troubles, and toiled as one people. But then, slowly, under the guise of developing the country, Kyrgyzstanis of certain ethnicities were informed that their place was in the national minorities rubric,” she said.