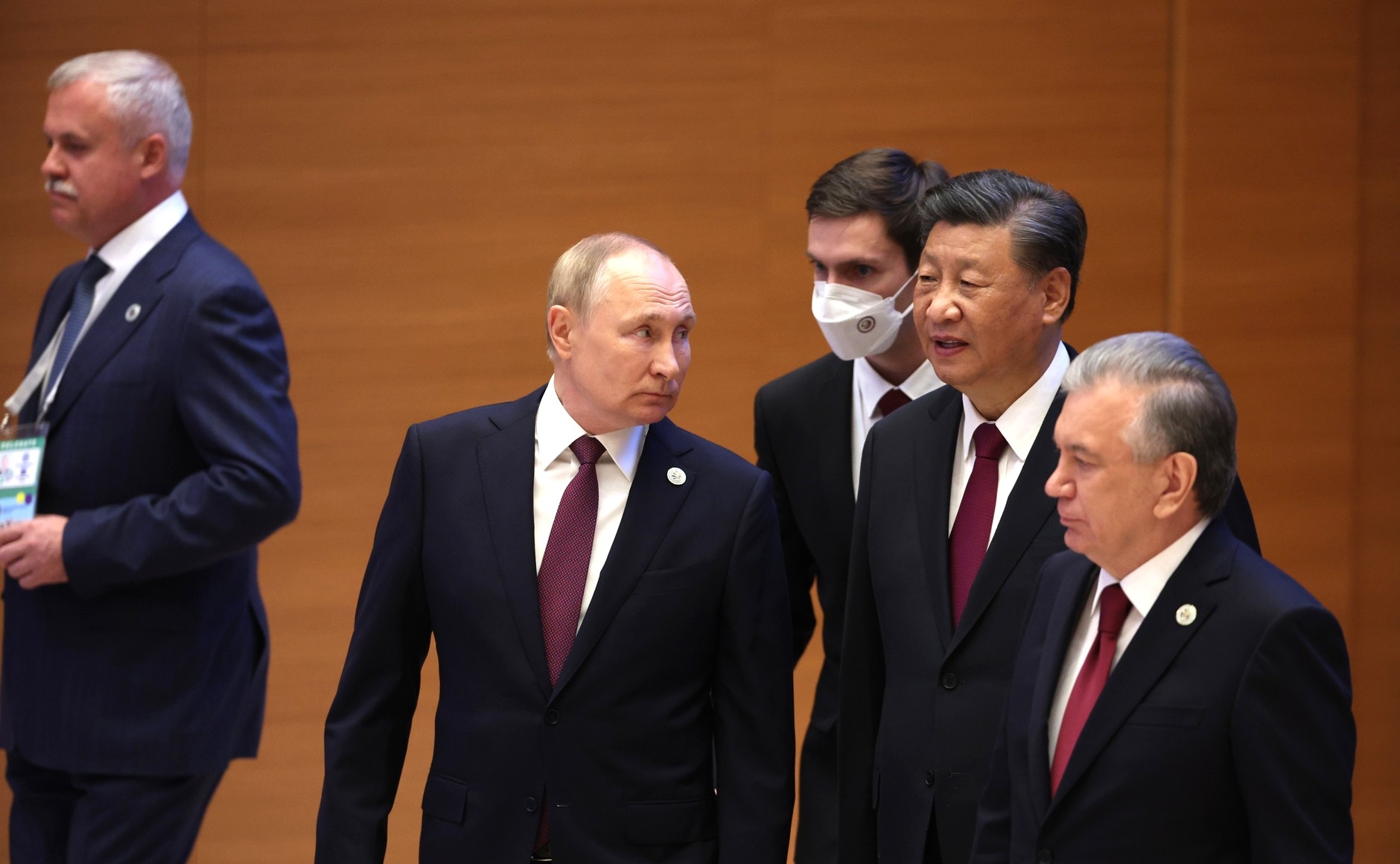 Xi and Putin at the SCO summit in Uzbekistan on September 16. (Photo: kremlin.ru)

Days before Putin launched an unprovoked attack on Ukraine, he met with Xi and the two declared “no limits” to the two countries’ strategic partnership. Now, amid Russia’s flailing war effort, Xi’s government is treading delicately and speaking in restrained tones about Moscow’s actions. China still sees the Kremlin as an asset in its efforts to erode U.S. influence around the world; at the same time, heavily sanctioned Russia is a growing liability for Beijing’s global trade ambitions. Given the fragile state of its own economy, China is being cautious about not doing or saying anything that could ensnare Beijing in the West’s sanctions regime, or alienate Central Asian governments, which tend to be cautious about Russia’s actions.

The challenge for Xi in balancing these divergent interests is intensifying. China won’t abandon Russia, but neither can it embrace the Kremlin’s aggressive tactics in Ukraine. The depth of China’s Russian dilemma was evident in the shallowness of Chinese state media coverage of Xi’s recent visit to Central Asia, his first foreign trip since the outbreak of the Covid pandemic. The lack of Beijing-controlled media attention to the tour stands in stark contrast to the saturation coverage given to Xi’s July trip to the western Chinese province of Xinjiang.

“International news outlets have noticed that Chinese media coverage [of the Central Asia tour] was cautious and low-key. They [Chinese officials] are trying to prevent suspicion or questions about China’s [stance on the war],” said Bin Ma, the deputy director of the Center for Shanghai Cooperation Organization studies at Fudan University in Shanghai.

In Central Asia, Xi and Chinese state media tip-toed around the Russia-Ukraine issue, while ever-so-gently encouraging Russia to show restraint via appeals for greater regional stability. At a September 15 face-to-face meeting between Xi and Putin in Uzbekistan, the Russian leader acted as though China’s message had gotten through, acknowledging that Beijing had “questions and concerns” about Russia’s conduct in Ukraine.

But if Xi thought the summit meeting might have a moderating effect on Russia, he was mistaken. Within days of the meeting, Russia endorsed the holding of sham referendums in four rump provinces of Ukraine to create a pretext for territorial annexation. Then, on September 21, Putin doubled down on belligerence, ordering a partial mobilization and warning that he wasn’t bluffing when stating that the Kremlin might use nuclear weapons “to protect Russia and our people.” The mobilization order has sent a new socially destabilizing wave of Russian migrants flooding into Central Asian and other neighboring states, as a large number of Russian men seek to avoid being drafted.

Chinese displeasure with Russia was barely concealed in the Chinese Foreign Ministry response to Russia’s annexation intentions. Russia’s efforts to alter Europe’s borders by force has unwanted ramifications for China, which has preached the gospel of territorial integrity as it has dealt harshly with ethno-separatism in Xinjiang. Thus, Chinese leaders can’t be seen as endorsing Russia’s annexation ambitions in Ukraine without undermining their own credibility on the Xinjiang issue. Chinese Foreign Ministry spokesman Wenbin Wang, speaking at the ministry’s daily press briefing September 23, put China’s stance on Ukraine squarely at odds with Russia’s.

“We believe that all countries deserve respect for their sovereignty and territorial integrity, that the purposes and principles of the UN Charter should be observed, that the legitimate security concerns of any country should be taken seriously, and that support should be given to all efforts that are conducive to peacefully resolving the crisis,” Wang said.

Xi’s Central Asian tour made it clear that the region is vital for the continuing success of his signature economic development project, known as the Belt & Road initiative (BRI). The visit likewise signaled that China’s trade priorities are superseding Russia’s geopolitical interests in shaping Beijing’s regional policy.

Sanctions imposed on Russia have effectively shut down BRI’s Russian rail route. This is forcing China to explore export and investment alternatives in Central Asia, including the expansion of trans-Caspian rail routes. In a commentary published September 13 on the official website of China’s State Council, Xi said his visits to Kazakhstan and Uzbekistan were aimed at “creating a batch of high-standard, sustainable, and high-quality projects that benefit people’s livelihood” in Central Asia. He named “artificial intelligence, big data, digital finance, e-commerce, and green energy” as “growth points” that China was interested in developing.

Chinese analysts, like government officials, are walking a tightrope when discussing Russia’s and China’s interests in Central Asia. For example, Ma, the Fudan University expert, insisted that China is not competing with Russia in Central Asia. “China is just trying to improve its collaboration with this region,” he said.

Moving forward it seems certain that China won’t disavow its strategic partnership with Russia, but Beijing may put more distance between itself and the Kremlin.

“China and Russia also have a lot of areas in which they don’t collaborate,” said Ma, adding that their bilateral relations could be described as “strategic coordination.”