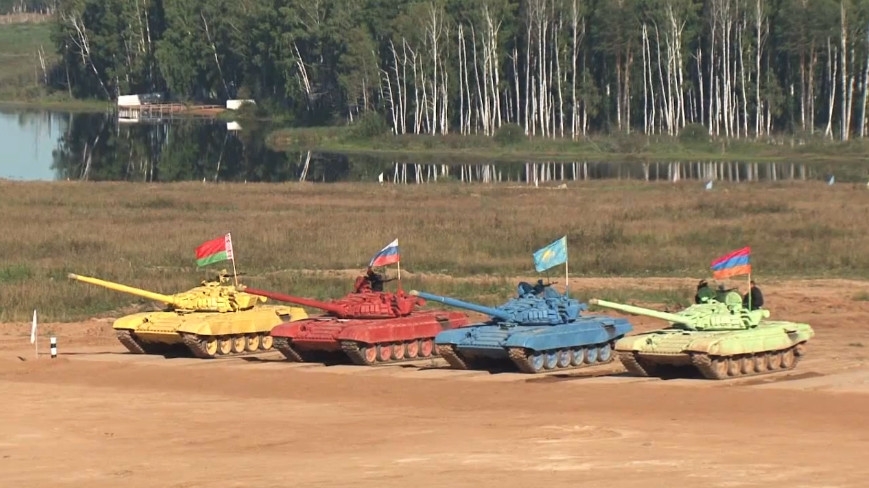 Tanks of the four competitors in the biathlon show their colors. (photo: MoD Kazakhstan)

In a uniquely Russian bid to boost post-Soviet solidarity, the Moscow-led Collective Security Treaty Organization has held a "tank biathlon" competition. The competition is more or less what it sounds like: as in the better-known skiing version, crews compete to race their tanks around a course while shooting at targets. Russia came in first, with Kazakhstan second, Belarus third and Armenia a distant fourth.

Russia remains the world’s biggest exporter of battle tanks, the Moscow-based Center for Analysis of Global Arms Trade says. So this tank biathlon appeared to be an entertaining if unconventional sales pitch, Pukhov said.

“We’ll do our best to ensure that foreign armies buy our tanks in the future,” [Defense Minister] Shoigu said, announcing the event last week.

While Kazakhstan finished second, its media played up the result as a victory. The presidential communications service headlined its story "Kazakhstani tankers showed remarkable results" and Kazinform raved "Kazakhstan stuns at Tank Biathlon contest in Russia... Kazakhstani tankers did astoundingly good at the Tank Biathlon International Competition." Armenia's press, not surprisingly given their country's poor results, downplayed the results and relegated the stories to the sports section.

Russia seemed to take it less seriously; the event inspired the usually staid state news agency into an uncharacteristic display of snark:

[T]he vibe was like that at a pro wrestling match organized by the Soviet Union.

The adrenaline-filled event called for scantily clad cheerleaders, hard rock, beer and an announcer frothing at the mouth with excitement but came up short on all counts.

Instead, there were yawning gaps between events, punctuated only by officials’ sleep-inducing speeches.

Any metal band would surely sell their souls for the chance to play this gig, but the live soundtrack to the event sounded prehistoric. Some of the Soviet tunes played were so old that one explicitly praised Stalin.

The event presented a curious cultural counterpoint to the world track and field championships being held at the same time in Moscow. While one Swedish athlete drew controversy for painting her nails in a rainbow pattern to protest Russia's new anti-gay laws, the CSTO -- with no apparent ironic intent -- chose to paint the competing tanks in bright colors, creating a rainbow effect on a much larger scale.

Russia has invited both the U.S. and Germany to compete in similar events in the future, but the U.S. sounds unenthusiastic. But one wonders: is it too late to add the event to the 2014 Olympics in Sochi?