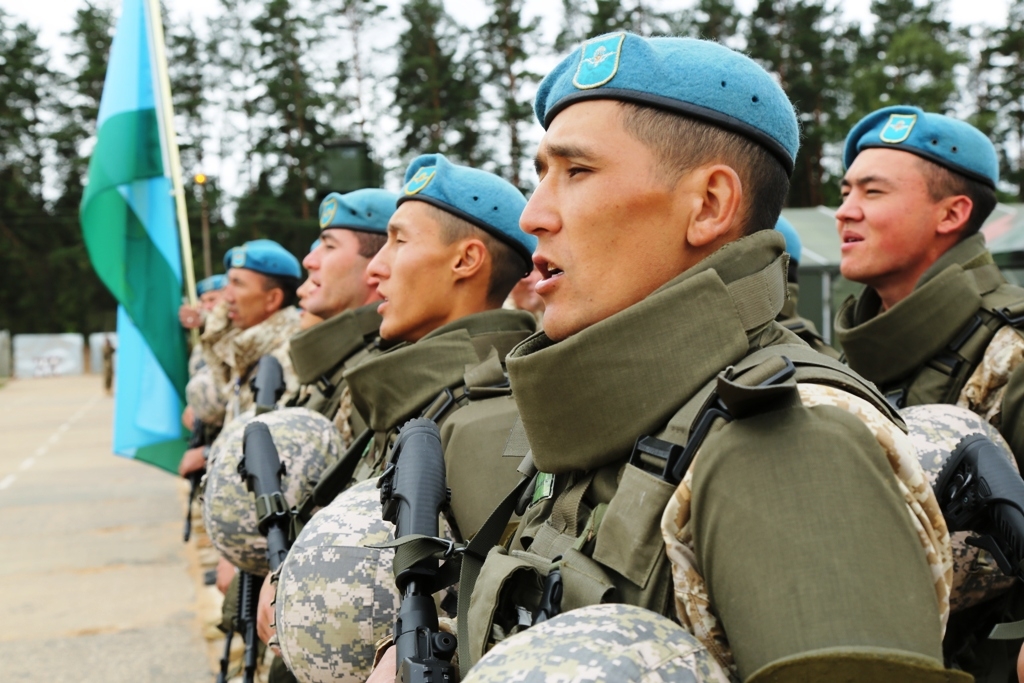 Soldiers from Kazakhstan take part in the opening ceremony of "Cooperation-2016," the CSTO military exercises taking part near the borders of Estonia and Latvia. (photo: MoD Kazakhstan)

Russian military exercises near its western borders have become de rigeur over the last couple of years, as tension between Russia and NATO has spiked. But exercises that kicked off this week are novel in that Russia has brought along its allies from the Caucasus and Central Asia, which have for the most part sought to avoid getting drawn into Russia's conflict with the West.

The exercise kicked off August 16 in the Pskov oblast, which borders Estonia and Latvia. About 5,000 Russian soldiers are taking part, along with about 1,000 from the other countries of the Collective Security Treaty Organization: Armenia, Belarus, Kazakhstan, Kyrgyzstan, and Tajikistan.

These exercises, under the rubric "Cooperation," are the annual cornerstone of the CSTO military exercise program. But there are some new twists this time. For the first time in the history of the exercises, Russia's ambassador to NATO Aleksandr Grushko is observing them. "Obviously, in the situation where NATO countries are pursuing a course of military containment of Russia, we have to undertake efforts to ensure that Russia's safety is secured," he said at a press conference there. "I'm sure that the NATO countries are carefully following" the CSTO exercises, he added. "The art of war is an extremely competitive field."

In a column in the newspaper Nezavisimaya Gazeta, military analyst Vladimir Mukhin noted that the exercises are much larger than the usual "Cooperation" format, and that they're being held "in the immediate vicinity" of NATO member Baltic states. "Therefore Russia together with its allies is preparing countermeasures," he quotes another analyst, Yuriy Netkachev, as saying.

"These exercises are taking place at a very difficult period of time, when the situation in the world is trending toward complexity. You can all observe, how on the borders of our countries new challenges are forming," said Colonel-General Andrey Kartapolov, the commander of Russia's Western Military District, at the opening ceremony.

The non-Russian soldiers are part of the nascent CSTO Collective Rapid Reaction Force. But those countries didn't release a lot of information about who, exactly, they sent to Pskov. Kazakhstan sent a unit of paratroopers, but the details of the Armenia, Belarus, Kyrgyzstan, and Tajikistan contingents remained obscure.

But at least the Belarusian and Kazakh units played reasonably serious roles. In the scenario of the exercise, "an enemy has invaded one of the member-countries of the Collective Security Treaty. Intelligence units of Belarus and Kazakhstan need to find the exact location of the enemy and report the coordinates to headquarters. Russian aviation joins the exercises with its 50 military aircraft, helicopters and drones, tanks and artillery," Belarusian state television reported.

UPDATE: The exercises took a somewhat surreal turn on Thursday, as RIA Novosti reported that during one stage of the exercise, a female voice over a loudspeaker broadcast the following, apparently as a sort of simulated psyop:

NATO soldiers! You are being deceived! You are not peacekeepers! Put down your weapons! You are fighting on foreign soil. With your perfidious attacks you have disturbed a peaceful country. The righteous retribution and anger of the people, who have never suffered defeat in any war, will catch up to you. Put down your weapons, and stop being puppets in the hands of your leaders!

RIA Novosti reported that the message was transmitted in "several European languages" including English, German, and Russian.