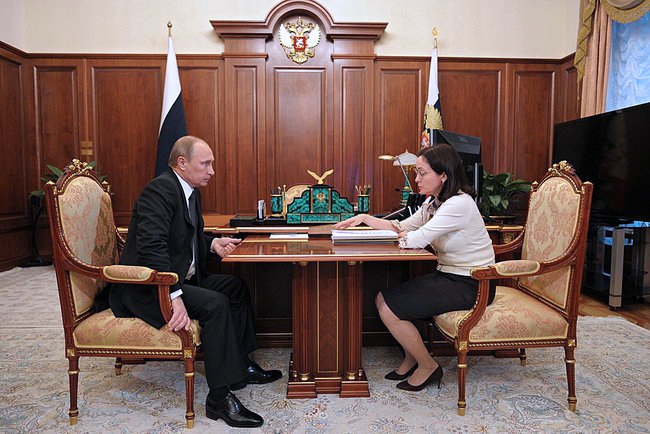 Russian President Vladimir Putin meets with Elvira Nabiullina, governor of Russia’s Central Bank, in June 2014 to discuss the economic, banking and financial status of the country. The Central Bank estimated that the net outflow of capital from Russia reached $151.5 billion in 2014. (Photo: Russian Presidential Press Service)

Amid a spreading climate of fear in Russia, underscored by the late February assassination of Boris Nemtsov, Russians with something to lose are increasingly trying to find safe havens abroad for their assets.

The net outflow of capital from Russia reached $151.5 billion in 2014, according to statistics compiled by the nation’s Central Bank, by far the highest annual volume since the bank started keeping track of it in 1994. The 2014 flight total was equivalent to about one-seventh of Russia’s gross domestic product of 70.9758 trillion rubles, or about $1.1 trillion at the rate of exchange as of the end of December 2014. Overall, the Russian economy had its worst year since President Vladimir Putin gained power on the last day of the 20th century.

The surge in capital flight has sharpened the economic challenges for Putin’s government, which has been slow to respond to the decline of Russia’s economic fortunes. In 2013, capital flight stood at $61 billion, a total that the Kremlin deemed “extreme.” Just over a year ago, Minister of Economic Development Alexei Ulyukayev assured that the 2014 figure would not exceed $30 billion. His agency also predicted that the Russian ruble would hold its own against the dollar and the economy would grow at a 2.5 percent clip.

The capital flight figures expose a glaring dichotomy in public attitudes toward Putin’s leadership. On the one hand, opinion surveys show Putin and his policies, especially Russia’s tough stance toward Ukraine, to be wildly popular. At the same time, the moneyed class’ evident alarm, reflected in the flood of cash streaming out of Russia, offers perhaps a better indicator of Russians’ estimation of Putin’s job performance.

Putin has sought to downplay the capital flight issue. In a late December address in the Russian parliament, he recalled that in 2008 capital flight from Russia reached $133 billion, but “it was not a problem; everyone remained alive and kicking, and that money returned as the situation normalized.” Putin also made a somewhat cryptic assertion that “50 percent of the money” classified as fleeing capital in 2014 actually remained in the country. “It did not go anywhere,” Putin stated.

It is hard to square Putin’s assertion when looking at official data compiled by the Central Bank. In particular, the bank expressed alarm over the fact that Russian companies had to make $115-$130 billion in payments to service their foreign debts. The payments were necessary because private companies “were unable to refinance their loans due to [Western] sanctions,” the bank noted. With the sanctions severely restricting Russian businesses’ access to foreign capital markets, companies are starved of working capital, which jeopardizes their ability to grow, or even survive.

Andrei Belousov, a Putin economic advisor, claimed earlier that a significant portion of capital flight should be seen instead as direct foreign investment, which he described as a positive development. According to an annual government statistics report, Russia invested $201.64 billion in foreign countries in 2013 (2014 numbers have not yet been published).

Belousov’s assertion on foreign investment seems highly questionable. According to the same 2013 government statistics report, $61.6 billion (or 30.5 percent of the $201.64 billion total) went to the British Virgin Islands, a known offshore haven where money goes to hide. Being that the Island’s annual GDP is under $1 billion, either the territory’s economy received a phenomenal windfall, which would be the biggest news of which no one has heard, or, much more likely, the Russian money simply disappeared into offshore bank accounts. Overall, about two-thirds of what Belousov classified as “foreign investments” ended up in the British Virgin Islands, Switzerland, Cyprus and Bermuda, all offshore financial centers known for their banking secrecy.

For now, Russian government officials are predicting that the pace of capital flight will decline in 2015. “We expect the number in 2015 to remain within $90-$100 billion, which is lower than our previous estimate of $120-$130 billion,” the state-run news agency RIA Novosti quoted Minister of Finance Anton Siluanov as saying.

Meanwhile, the Ministry of Economic Development estimates that net capital outflow in 2015 will reach $115 billion, while the Central Bank is slightly more pessimistic, expecting capital flight to reach $118 billion.

Even if the Finance Minister’s optimistic forecast of $90-$100 billion turns out to be accurate, the projected capital flight number in 2015 would still be the third highest since the Central Bank started tracking the trend in 1994.