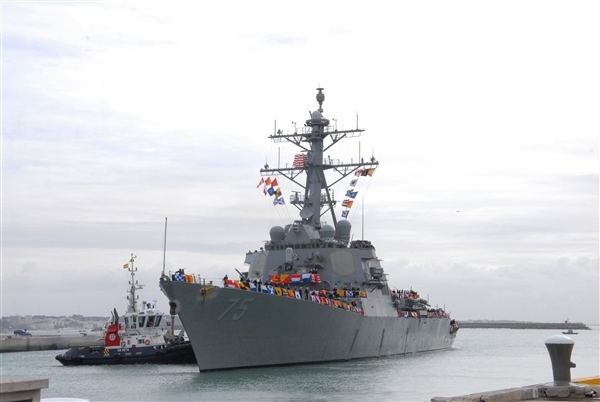 Russia continues to complain about the U.S. and NATO's naval presence in the Black Sea, suggesting the Kremlin is going to keep pushing to limit western military influence in the sea.

After Russian Foreign Minister Sergey Lavrov criticized the U.S. and Turkey for ignoring the Montreux Convention, the 1938 treaty that regulates the naval presence in the Black Sea, the Kremlin has doubled down on its criticism, saying that the U.S. had kept a warship in the sea for longer than the 21 days it is allowed. Turkey -- which enforces the convention -- had responded to that accusations, saying they "do not in any way represent the truth"

In an April 20 statement, the Russian Ministry of Foreign Affairs called the Turkish statement "extremely bewildering" and that the USS Taylor had stayed 11 days longer than it was supposed to. "Turkey did not inform us about the overstay. We have expressed our concern to the Turkish and US side in a verbal note," the statement said. "We presume that Turkey, as well as non-neighboring countries, will in the future strictly observe their obligations with respect to the convention."

The USS Taylor, recall, had run aground in the Black Sea and had to be serviced in Samsun, Turkey, as a result (a fact the Russian statement didn't mention).

At the same time, Russia responded strongly to the entrance of another U.S. warship into the Black Sea, the USS Donald Cook. An unnamed Russian Defense Ministry source told ITAR-TASS that, given the presence of a French warship already in the sea and the planned arrival of two more, we can say that NATO is building a naval grouping in the Black Sea in the vicinity of the Russian border for the first time since 2008." The source went on:

“NATO has stopped muddying the waters claiming that the Black Sea calls of its military ships are planned and regular. Now they are openly declaring that the visits are linked directly to the events in Ukraine...

First, they want to give a moral boost to the authorities in Kiev; second, they need to demonstrate strength to Russia in a bid to deter it. Third, they need to collect reconnaissance information about the actions of the Russian military command in Crimea and other Russian regions bordering on Ukraine, including radio and electronic surveillance against our Armed Forces."

All this is taking place against the backdrop of Russia's takeover of much of Ukraine's navy, and the announcement that it intends to abandon the basing agreement it had with Kiev over the Russian Black Sea Fleet in Sevastopol. That agreement, among other things, limited Russia's ability to build up that force, so Russia is now free to add as many ships as it wants to that force.

It's not clear to what extent the American and French deployments are linked, and whether or not the Russian claims are true (they very well could be). But this high-level attention suggests that Russia, as it takes strong steps in building up its own naval power in the Black Sea, also intends to keep a very close watch on the foreign military presence there.