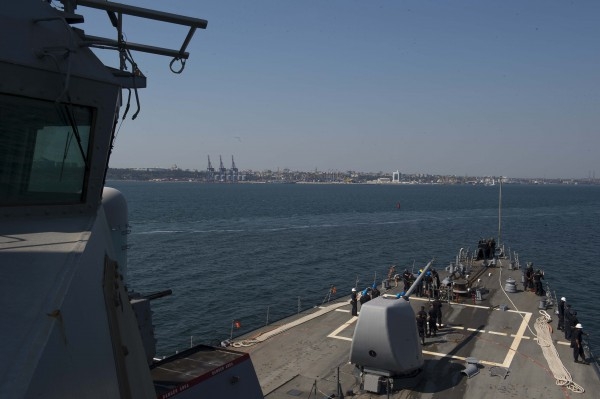 The United States, Ukraine, and other allies are conducting joint naval exercises in the Black Sea, which the American commander says Russia has greeted, somewhat uncharacteristically, "cordially."

This year's iteration of the annual Sea Breeze exercises was kicked off September 1 in Odessa, with U.S. naval officials and Ukrainian Prime Minister Arseniy Yatsenyuk present.

Yatsenyuk took the opportunity to paint the exercise as an anti-Russian effort, saying that drills like this will "turn the Black Sea into a safe area and to make the Russian Federation, which illegally annexed Crimea, realize that any illegal actions will be curbed by our joint efforts." In Odessa Yatsenyuk also announced that the country's new military doctrine, for the first time, identifies "an enemy and an aggressor" -- Russia.

But a senior U.S. naval official took pains to emphasize Russia's equanimity with respect to these exercises. Russia has in the past greeted the U.S. naval presence in the Black Sea with some mildly aggressive gestures, but not this time. When the USS Donald Cook, the American ship taking part in the drills, entered the Black Sea a Russian frigate was waiting. It hailed the warship and its commander by name and “welcomed him to the Black Sea,” said Vice Admiral James Foggo, deputy commander of U.S. Naval Forces Europe in a telephone press conference with American reporters. "It was cordial," he added.

He also noted that Russia has tried to decrease the tension on the Black Sea. From Sea Power magazine:

After some uncomfortable encounters with Russian ships and aircraft during the annual BaltEx operations in the Baltic Sea this spring, Foggo said a Russian vice admiral visited him in Naples for a nearly day-long “frank and open” discussion. Foggo said he found that meeting “refreshing” and looked forward to a day when that kind of dialogue could be routine.

Foggo did note that Russia often replies to U.S. forays into the Black Sea with a show of force of its own, which the American officer both downplayed and complimented. From Navy Times:

The Russians typically respond to a NATO exercise with a show of force Foggo calls a “Snap-Ex,” in which they send a large number of ships at sea for a few days.

“It is a message. Everything is strategic messaging,” the three-star said. “I am always impressed with that. It is not easy to get ships underway on short notice.”

Last year, for example, the Russians held a large-scale war game in the Black Sea at the same time as the U.S., Bulgaria and other nations conducted multinational training.

Foggo said he was unaware of any Russian plans to conduct a Snap-Ex during this exercise, but said partner nations would be ready to respond accordingly. If it does take place, he said, “I don’t have any problem with that.”

Russian media reporting on this exercise does seem to feature less bluster than has often been the case with other recent U.S. Black Sea drills. Does this really mark a decrease in tension on the sea? We'll see.

Other participating navies include those of Bulgaria, Germany, Greece, Italy, Moldova, Romania, Sweden, Turkey, and the United Kingdom. The exercises will continue through September 12.

UPDATE: Russia may not be quite as accepting of the exercises as it seemed at first, though its ire is directed more at Ukraine's statements about Sea Breeze than the drill itself. From a TASS report, quoting Russian Foreign Ministry spokeswoman Maria Zakharova:

"We have to draw attention to the fact that, against a backdrop of more active and constructive discussion about the situation in Ukraine on international platforms, Kiev again starts making bellicose statements, takes decisions aimed at escalating the intra-Ukrainian conflict, tries to shift responsibility for starting a civil was in the country’s south-east on others and complicates Russian-Ukrainian relations even further," Zakharova noted.

She reminded that Ukraine’s new military doctrine approved recently by the country’s National Security and Defense Council "declares that Russia is the main threat." "Then, they plan to redeploy Ukrainian Armed Forces to the south and south-east of the country. Such irresponsible policy will hardly contribute to consolidation of the Ukrainian society," she added.

"Joint US-Ukrainian navy drills in the Black Sea do not facilitate the peaceful settlement in the region as well. This sends a wrong signal," the diplomat stressed.