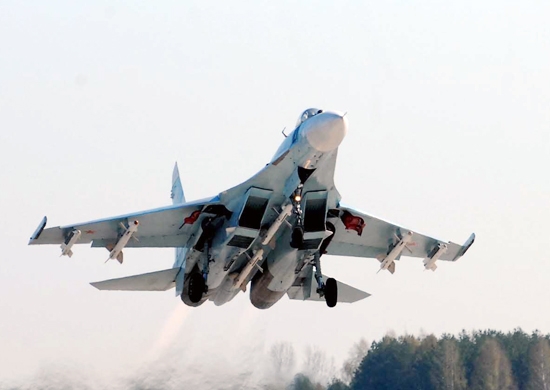 A Russian Su-27 fighter, soon to be based permanently somewhere in Belarus. (photo: mil.ru)

Russia has chosen a new location for its air base in Belarus and pushed back the date of its establishment by a year.

Russia has been talking about establishing an air base in Belarus since last year, which would be its first post-Soviet military facility in the country, but the details keep changing. In June 2013, Russia said it would set up the base near Lida "within months." In August 2014, Russia's air force chief Lieutenant General Viktor Bondarev said that the base would be located instead in Baranovichi (and denied that Lida had ever been the plan), and would open in 2015.

But this week, Bondarev again addressed the question of the base, and said it would now open in 2016 and would be in Babruysk, in eastern Belarus. (Lida and Baranovichi are both in the western part of the country.) “The airbase of the Russian and Belarusian Air Force will be created in 2016. Su-27 fighter jets will be based there,” Bondarev told reporters.

Bondarev didn't address the issue of why yet another change of plan. But Belarussian military analyst Alexander Alesin told gazetaby.com that there were likely three reasons: first, Babruysk is further from Poland and so is less vulnerable to Polish missiles. Second, it's unoccupied now so Russia could be the sole occupant, rather than sharing it with the Belarussian military (which it would have to have done with Baranovichi). And third, the delay is likely due to Belarussian President Alexander Lukashenko, who may not want to allow a Russian base to be established before presidential elections in Belarus, currently scheduled for 2015.

The Belarussian Ministry of Defense declined to comment on Bondarev's remarks, saying that it wouldn't "comment on media reports until reaching an intergovernmental agreement about the placement of the Russian air base on Belarussian territory."

Curiously, the strongly pro-Kremlin newspaper Moskovskiy Komsomolets devoted more than half of its story on Bondarev's announcement to recalling a 2007 incident when Lukashenko said that Babruysk had been a "pigsty" before World War II because it was mainly Jewish and Jews don't take care of the places where they live.

Anyway, Belarus has become distinctly uncomfortable with Russia in the wake of Moscow's actions in neighboring Ukraine; there are no doubt difficult negotiations going on behind the scenes as the two countries hammer out this intergovernmental agreement.