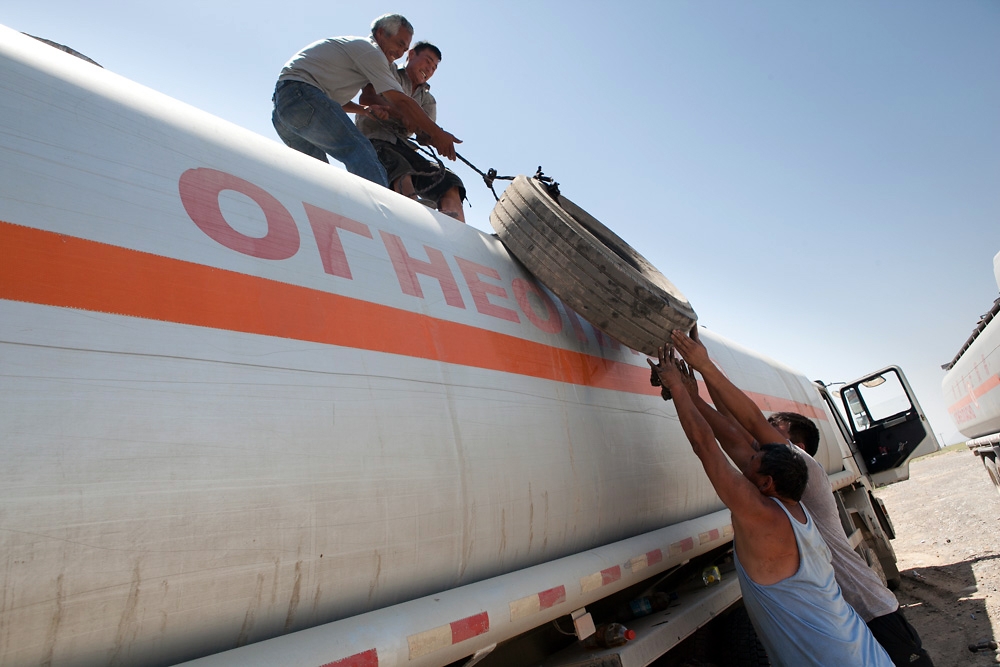 Fuel prices in Kazakhstan, Kyrgyzstan, Tajikistan, and Uzbekistan have risen quickly recently due to drops in distribution from Russia. (Photo: David Trilling)

Simultaneous repairs at key Siberian refineries that supply Central Asia, along with a major accident in June, have caused a spike in petrol prices in Kazakhstan, Kyrgyzstan, Tajikistan and Uzbekistan, all of which source their fuel from Russia.

In Tajikistan, the price for 95-octane petrol produced at Gazprom’s Omsk refinery rose 38 percent this summer. In Kyrgyzstan, which is 100-percent dependent on Russian fuel imports, the price edged up steadily all summer, and then jumped 5 percent in some parts of the country during the second week of September alone. In Kazakhstan, where local refineries only meet two-thirds of domestic needs, petrol rationing is likely to continue for the foreseeable future, officials say.

The Ukraine crisis appears to have played a role in the shortages.  Russian exports to Ukraine of finished fuel products (including petrol, diesel and bitumen) rose 150 percent during the first half of 2014 against the same period in 2013, according to the RBK Daily. On September 16, Kazakhstan’s Deputy Energy Minister Uzakbai Karabalin partially blamed Russia’s commitments to supply newly annexed Crimea for causing Central Asian shortages. And Ukrainian hackers claimed on September 26 to be in possession of documents that detail, among other things, plans for Moscow to supply fuel to pro-Russia separatists in eastern Ukraine.

The shortages are highlighting the shortcomings of Russian infrastructure: Even though energy-giant Russia produces 10 million barrels of crude a day in a good year, it cannot meet the combined burden of domestic demand and promises to its allies. Andrew Neff, senior energy analyst at IHS Global Insight in London, notes that “Russian refineries in general are in need of upgrading,” with many tailored to supply heavy fuel oil to the military-industrial complex, rather than gasoline to everyday consumers. Tax incentives to encourage refiners to refocus production “haven’t been as successful as hoped,” Neff added.

Generally, Russia’s fuel-production facilities tend to undergo scheduled repairs in the spring and summer, due to the impracticalities of renovation in the freezing winter. But petrol consumption also tends to rise in the summer, when people are more mobile.

“In separate regions of Russia there is a fuel deficit,” says Igor Yushkov, an analyst at the National Energy Security Fund, a Moscow consultancy, adding that he expects production to recover this fall. Supplies to Central Asia may have suffered due to “seasonal repairs.”

“The repair schedule of every refinery is different, and different refineries are at different stages of modernization,” Yishkov said.

Russia’s Energy Ministry refused to comment by telephone when EurasiaNet.org asked why these critical refineries are undergoing repairs at the same time.

Another factor in the shortages was a June 17 explosion at the Achinsk refinery in eastern Siberia, which killed seven workers and took a facility producing 7 million tons of refined fuel annually out of production.

Demand for petrol in Ukraine – in particular in areas dominated by pro-Russian separatists, and Russia-annexed Crimea -- has risen sharply. The International Energy Agency reported that, prior to 2012, Ukraine tended to refine the bulk of its crude at domestic refineries. But that sector has been brought to a near standstill due to low profit margins, according to Neff of IHS. Kremlin-linked oil giant Rosneft had planned to restore an idle 8-million-ton-capacity refinery in Lugansk Oblast by the end of this year, but the facility was partly destroyed in fighting between the Ukrainian military and Russian-backed separatists in July.

“The crisis [in Ukraine] has further worsened the [domestic] refining sector,” says Neff, stimulating demand for imported petrol. Shortly after former Ukrainian President Viktor Yanukovych’s February ouster, “there were various stories of Yanukovych-connected oligarchs getting rich quick on the import of cheap oil products from Belarus and Russia. No doubt this is still happening in the current crisis, just with different players,” Neff told EurasiaNet.org via email, referring to separatists opposed to the Kyiv government.

With Russian refining capacities seemingly stretched to their limits, Kazakhstan, Kyrgyzstan and Tajikistan have all called on China to help improve domestic refining capacity. Chinese companies have already built one refinery with a projected capacity of 800,000 tons per year in Kyrgyzstan, and plan to complete a 1.1-million-ton facility in the Tajik president’s hometown by 2017. Kazakhstan’s TengriNews reported in May that Beijing would invest $1 billion to upgrade an 8-million-ton refinery in Shymkent.

In a development that has outraged Kyrgyz MPs, it appears most of the petrol refined at the Chinese facility in Kyrgyzstan – which has limited reserves of crude, but is producing at partial capacity – is reportedly going toward easing Tajikistan’s petrol crisis, and further south to Afghanistan.

In an interview with the Kyrgyz newspaper Vechernii Bishkek on September 26, the refinery’s director Andrei Yu Shan Lin said the Chinese company that operates the facility is not to blame. “We have an agreement to supply local [Kyrgyz] companies. How they distribute what we sell is not something we have knowledge of,” he told the paper.