The idea of bringing teachers from Russia to Tajikistan has been on the agenda for years. 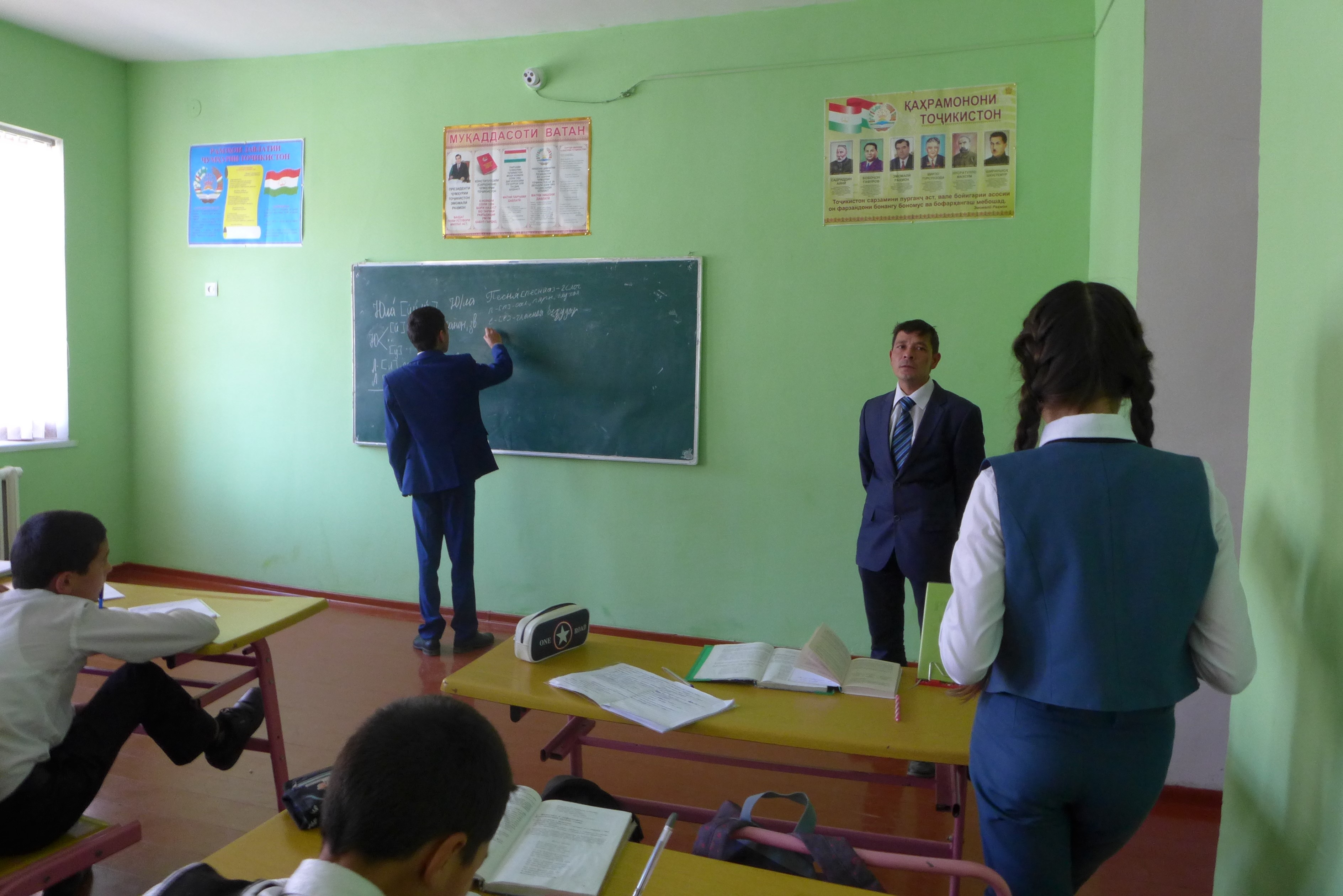 Emil Burkhanov’s pupils call him ustod, the Tajik word for teacher, a small concession in a class conducted rigorously in Russian.

The 37-year-old was one of 28 teachers dispatched to Tajikistan by the Russian government at the start of this academic year, part of a pilot project to assist a struggling, cash-strapped education system. It is the first initiative of its kind in Tajikistan since the fall of the Soviet Union.

When the Russian Education Ministry first advertised the teaching jobs in Tajikistan, Burkhanov was quick to apply.

“I was born in [the Tajik city of] Nurek, and then we moved to Dushanbe. When the war began, after 1991, we left Tajikistan. So when they announced the selection process, I banked on the fact that I knew Tajikistan,” Burkhanov, who now lives in the Russian republic of Tatarstan, told Eurasianet.

Still, he was initially a little taken aback when he was assigned to a school in Khorog, in the remote Gorno-Badakhshan Autonomous Region, or GBAO, an uncomfortable 16-hour-plus drive from the capital.

The principal at the Khorog school, Shodigul Konunzoda, said she is delighted with Burkhanov and that he is filling a yawning gap.

“The problem is that everybody can speak Russian, but they all have an accent and make mistakes. So when they asked me what teacher I needed, I said a Russian language teacher,” Konunzoda said.

Burkhanov has broadened his palette though, expanding his remit to encouraging his students, who are in their early teens, to think hard about future careers and even what businesses they might be able to set up in their local community.

The idea of bringing teachers from Russia to Tajikistan has been on the agenda for several years. President Emomali Rahmon produced fantastic visions in 2013, when he declared that his country could do with 4,000 Russian teachers. Without ever explaining how his government would pay for it, he vowed to provide all the necessary accommodation and salaries. Within a year, he had knocked off a zero, dropping his projection to 400 teachers.

Now that this idea is finally being tested out with a few dozen teachers, it is Russia footing most of the bill. Tajikistan provides accommodation, but only about $90 a month in pay — the same as what locals get. The Russian government provides another $1,000 monthly per teacher. That is quite a bit more than Burkhanov could expect in Tatarstan, where teachers earn roughly $450 on average.

The participants in the pilot project have been deployed exclusively for now at state-run schools for gifted children. These institutions recruit children from all over the country and have living quarters attached. Burkhanov lives in a two-bedroom apartment in Khorog with his wife and two sons.

His colleagues elsewhere in the country teach a variety of subjects, including math, chemistry, biology and computer science.

There was initially talk of placing the Russian teachers in regular schools, but the group was swiftly commandeered by the Education Ministry. Although the schools where they work are purportedly Tajikistan’s premier educational establishments, some of the teachers, particularly those responsible for science subjects, have quietly grumbled about the lack of basic resources. Staff at schools often have to share a single textbook, passing it along to another at class time. And along with the teachers, Moscow sent tens of thousands of books in Russian to Tajikistan, but few are available when and where the teachers need them.

Burkhanov is hailed by his colleagues in Khorog for what they say are his progressive teaching methods. He favors dialogue, coaches pupils into giving presentations and tries to keep their homework engaging and interesting. And the children do not appear to see the lessons as a burden, said Konunzoda, the principal.

“I tell Emil to be stricter, but instead he does the opposite, he is gentle. During the quality inspections at the start of the year, his classes were ranked as being the best,” Konunzoda said, noting that Burkhanov’s fellow teachers are now trying to emulate his style.

Unfortunately for them, Burkhanov is looking to relocate as he feels that Khorog is too remote a location for a family man.

“My elderly mother is in Tatarstan, so I really need to be closer to a big city so I can visit her [more easily] during the holidays,” he said. “It is good for single people, but it is tough for somebody with a family.”

Authorities in Russia make no secret that assistance exercises like these are potentially valuable tools in the country’s soft power armory, similar in some ways to the U.S.-funded Peace Corps volunteer program, although the scale for now is much more modest.

Last August, as the participants of the pilot project mustered in Moscow, Valentina Matviyenko, the chair of Russia’s upper house of parliament, the Federation Council, told them that “your work is in effect that of goodwill ambassadors, envoys of Russian knowledge and culture.” The initiative was provisionally projected for just one year, but there are already plans to extend by at least one more, although there are no figures on how many teachers will be involve next time around.

Moscow is engaged in a long-term if often faltering exercise in shoring up its cultural and educational influence in Tajikistan. There are currently now 29 schools in the country providing instruction entirely in Russian. Another 126 schools offer a combination of teaching in both Russian and Tajik. On April 5, Russian Foreign Minister Sergei Lavrov said during a meeting in Moscow with his Tajik counterpart, Sirodjidin Aslov, that there are plans to build another five Russian-language schools in Tajikistan, but he provided no timeframe.

“We will try to promote this useful precedent beyond Tajikistan, in neighboring countries too. We see clear evidence of the demand for Russian education,” Lavrov said.

Around 21,000 Tajik citizens study in colleges in Russia or the satellite campuses of Russian universities in Tajikistan. That figure alone makes it obvious why instruction in Russian is so highly sought-after. Tajik universities are blighted by corruption, a lack of resources and an oppressive political climate that is inimical to independent research in the social sciences.

What’s more, by some estimates over a million Tajiks work as migrant laborers in Russia.

Jahongir Avezov, a 52-year-old resident of Dushanbe, described the effort to bring over Russian teachers as a much-needed remedy.

“In Tajik schools we are noting a pattern of degradation that has become chronic. Even though the authorities, and especially the Education Ministry, never tire of telling us about the rising levels of education among Tajik youths, what we are seeing in reality is the proliferation of an utterly uneducated generation that cannot even write their own initials without making a mistake,” Avezov said.