Russia: Economic Crisis Signals the Beginning of End for Putinism 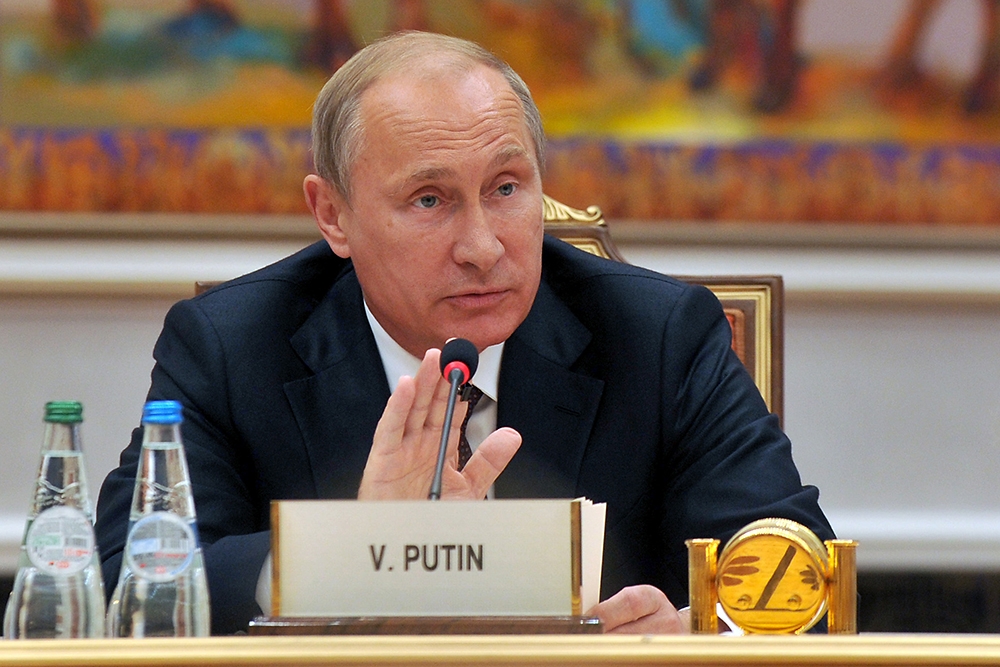 Putin: don’t worry, I have the Russian economy all under control. (Photo: EU)

The combination of Western sanctions and the collapse of oil prices is exposing deep structural problems in Russia’s economy, and it is showing the petro-state model of governance developed by Vladimir Putin is unsustainable. Yet just because Putin’s system can’t last doesn’t mean its demise is imminent.

Voices of reason in Russia readily acknowledge that the economy is in dire shape. In the past few months, Russia’s Central Bank has burned through roughly $90 billion of its reserves to prop up the ruble, but it hasn’t succeeded in stabilizing the Russian currency. “We have entered a real, full-fledged economic crisis,” Aleksei Kudrin, a respected economist and Russia’s former finance minister, said in late December. The prospects for 2015 appear bleak: the GDP is projected to contract by 5 percent while the inflation rate may climb to 15 percent. High prices, high interest rates and low nominal wage growth seem set to drive living standards down.

Alarmingly, the Russian leadership seems to be sitting on its hands as the economy goes up in smoke: officials have yet to develop anti-crisis measures, or propose a longer term strategy for economic reform. At his annual December news conference, President Putin indulged in wishcasting, voicing a hope that oil prices would bounce back within two years, rebooting economic growth in Russia. Reacting to the presidential remarks, the business daily Vedomosti editorialized: “Putin didn’t recognize his mistakes, but he did recognize that he lacks both the strategic vision of how to cope with the crisis and an understanding of how the economy works.”

The looming economic train wreck would be enough to bring down a government in just about every liberal democracy – but we’re not talking about an enlightened state here, we’re talking about Russia. In the parallel universe in which the Kremlin exists, Putin’s public approval ratings remain at a stratospheric height, hovering in the 80-percent range.

Paradoxically, the economic crisis may even be helping the Kremlin tighten its control over the country’s business sector, particularly vis-à-vis Russia’s financial kingpins -- at least over the short term. That’s because many tycoons now find themselves cut off from foreign credit markets, leaving them dependent on government bureaucrats for the survival of their economic assets.

As Russia’s economic crisis deepens, it is reasonable to expect a growing number of citizens to become dissatisfied. However, most Russian analysts doubt that Moscow will see a protest movement develop along the lines of the Euromaidan phenomenon that swept Kyiv. In fact, the Ukraine crisis and its violent consequences “have immunized the Russians against street protests,” suggested the prominent sociologist Olga Kryshtanovskaya.

“Russians will try to adapt to new conditions,” echoed Igor Bunin, the director of the Moscow-based Center for Political Technologies. “They don’t believe there’s good chance to change the situation through strikes and rallies, demonstrations and uprisings.”

While chances for a revolution from below seem low in the near future, 2014 is likely a turning point for Putinism. Events in the last six months have demonstrated that Russia’s post-Soviet socio-economic system has exhausted its potential. Worst of all, Putin and his supporters seem fixated on preserving the status quo, which means, above all, perpetuating their power. Thus, they are incapable of implementing needed reforms.

Anyone old enough to remember the implosion of the communist system in 1991 may be experiencing a sense of déjà vu these days. Today’s circumstances are somewhat reminiscent of those that existed during the late 1980s: there’s a polity that cannot be reformed, a leader who cannot be replaced and an economy plagued by corruption and mismanagement. The only major difference is that shop shelves during the late Soviet era were empty, while there are no shortages today. Yet skyrocketing prices may well put goods quickly out of reach for an ever larger segment of society.

If history is any judge, the trajectory for Putin’s system is pretty clear: it is heading inexorably towards collapse. Russia’s new reform cycle, argues the political scientist Aleksandr Morozov, “will be possible only following a large-scale civil conflict, a military defeat or a complete economic meltdown.” There is also the possibility of a “palace coup,” such as the one that attempted to topple former Soviet leader Mikhail Gorbachev in 1991, but which succeeded only in bringing down the communist system.

It is important to keep in mind that Putin is no Gorbachev. When confronted with the reality that the government he was leading was nothing more than an empty shell, Gorbachev was capable of leaving the scene peacefully. Putin is clearly determined to go down fighting.

It is noteworthy that in late December Putin signed Russia’s new military doctrine, a document that shockingly lists domestic political problems as a military risk. In outlining possible military responses, one provision suggests that foreign special operations forces could mingle with civilian protesters to foment instability. It is indeed remarkable that the doctrine treats local protesters and foreign special ops officers as potential allies and threats.