Russia to Enlist Allies in Fight Against NATO 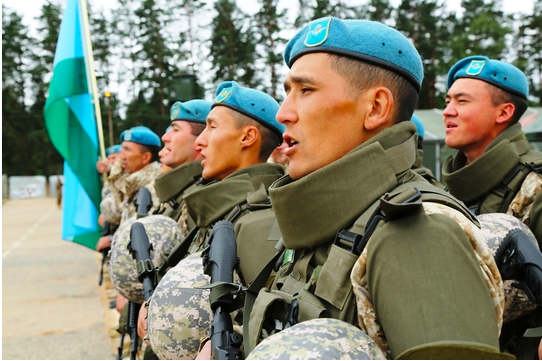 Soldiers from Kazakhstan take part in the opening ceremony of "Cooperation-2016," the CSTO military exercises taking part near the borders of Estonia and Latvia. (photo: MoD Kazakhstan)

Russia will try to enlist its post-Soviet allies in shoring up its western border against NATO, a senior security official has said. Those allies, however, have shown little interest in getting dragged into Russia's fight with the West, setting the stage for a rupture between Moscow and its ostensible partners.

The Collective Security Treaty Organization, the Russia-led military alliance, will discuss how to respond to NATO's buildup in Eastern Europe at its next summit, scheduled for December 26. That's according to Nikolay Bordyuzha, the CSTO's general secretary, in an interview with Russian newspaper Izvestiya.

"We should understand precisely what is happening around our borders, why NATO is bringing in weapons, creating infrastructure," Boryuzha said. "It's transferring an additional four battalions [toward Russia's borders], why are they doing this? And how is the security situation changing in general? How to react, so as to not be too late... This is what the conversation will be about. We shouldn't be quiet and do nothing, seeing how the countries around us are crammed with weapons, units are being deployed."

It's not clear what response Bordyuzha had in mind, as he said it would not entail a military buildup. "We have sufficient forces," he said.

It's also not possible to tell how out of context these statements are, and how high a priority NATO will in fact be for the CSTO. But it's also perhaps telling that on the same day that Bordyuzha's interview was published, the CSTO's own website republished another article from a Russian news website -- a rare thing to see on the CSTO site -- headlined "Is the CSTO Turning Into a NATO Opponent?"

It might be somewhat obvious to see the CSTO as a NATO opponent, given the central role NATO plays in Kremlin strategic thinking, but for most of its existence the CSTO has in fact been making quixotic efforts to cooperate with NATO. It was only in 2014, after the crisis in Ukraine began, that the CSTO formally abandoned those efforts.

Since then, the CSTO has only slowly become more assertive in directly taking on NATO. The most obvious step was Russia's hosting of CSTO military exercises this August in Pskov, which borders Estonia and Latvia. Those exercises included a psychological operations component, in which the following was announced over a loudspeaker in English, German, and Russian:

NATO soldiers! You are being deceived! You are not peacekeepers! Put down your weapons! You are fighting on foreign soil. With your perfidious attacks you have disturbed a peaceful country. The righteous retribution and anger of the people, who have never suffered defeat in any war, will catch up to you. Put down your weapons, and stop being puppets in the hands of your leaders!

The other CSTO members -- Armenia, Belarus, Kazakhstan, Kyrgyzstan, and Tajikistan -- have shown little inclination to get involved in a fight with NATO. They have been quiet about it so far, but all cooperate bilaterally with NATO and several NATO members, in an effort to not be constrained by their alliance with Russia. So what will happen if Russia forces them to take sides? It will be interesting to see what happens on Dec. 26 and if any of the other CSTO members even mention NATO. I'm going to bet no.