As the Taliban advances inside Afghanistan, Moscow talks up the threat from Islamic State. 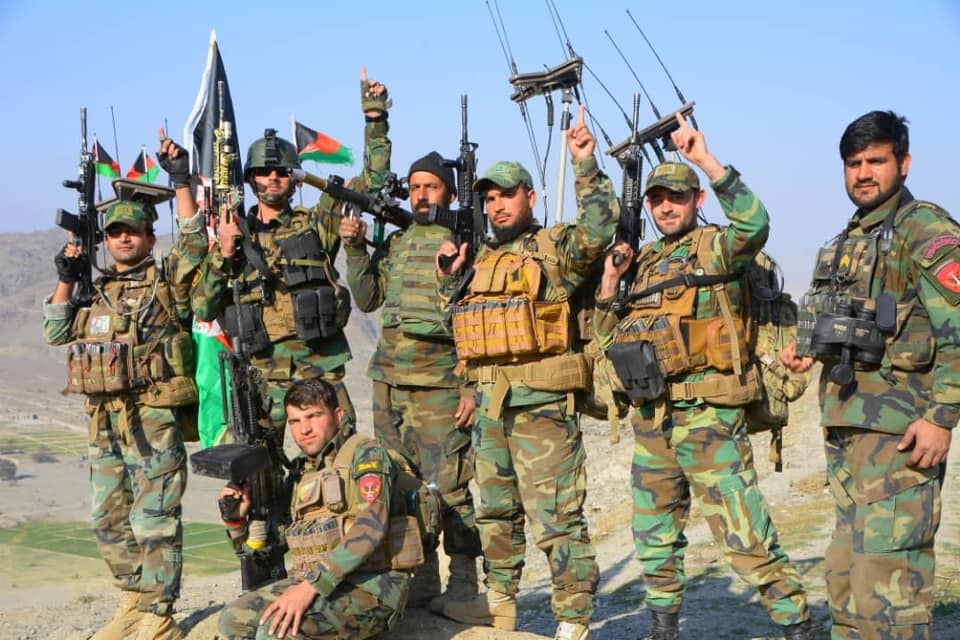 Afghan National Army soldiers after an operation against the Taliban this week in Nangarhar Province. (Afghan Defense Ministry handout)

Russia says it is worried that the Islamic State is gaining strength apace in northern Afghanistan. The United States looks to be bracing for a collapsing Afghanistan. And Central Asian states neighboring Afghanistan appear to be taking things in their stride.

Speaking at a July 2 press conference, Russian Foreign Minister Sergei Lavrov described what he claims are the Islamic State’s gains because of the poor progress of peace talks between warring parties in Afghanistan. That the Islamic State has a tactically significant presence in the country is not an assessment known to be shared by Western countries.

“Those in Afghanistan’s governing structures who are in every way possible trying to drag out this process should consider the consequences of these actions for their nation,” Lavrov was cited as saying by Interfax news agency.

Lavrov was also critical of what he termed the hasty withdrawal of NATO troops, which he said was being done before the country was in a proper position to secure itself.

“In these conditions, [the Islamic State] is actively capturing territory, primarily in northern Afghanistan, right on the border with countries that are our allies,” he said.

Moscow’s stated preference, as articulated by Lavrov on July 2, is for the formation of an interim so-called transitional government brokered by a quartet of countries comprising Russia, the United States, China and Pakistan.

This scenario is one of several that has been put on the table by Washington, but it has previously been rejected by Afghan President Ashraf Ghani, who was in the United States for a working visit late last month.

Afghan officials have been publicly bullish about the implications of the U.S. withdrawal, which is scheduled to wrap up by September 11, but rapid Taliban gains in the past few weeks have fed growing concerns that the militant group could regain effective control over the country in the imminent future.

A notable chunk of those gains have been recorded in the north – a fact underlined by repeated cases of Afghan troops and government-allied militias attempting to seek refuge in neighboring Tajikistan and Uzbekistan.

The scale of threat posed by the Islamic State as implied by Lavrov is not broadly in line with U.S. assessments, which tend to see the group’s Afghan affiliate – known commonly as Islamic State-Khorasan Province, or ISKP – as a diminished force. The ranks of the ISKP had been estimated variously as numbering anywhere between 2,000 and 4,000 fighters as of 2019, although the organization’s strength is said by U.S. military sources to have subsequently been depleted by U.S. and Afghan military offensives.

In August 2020, however, Colin Clarke, a senior fellow at the New York-based Soufan Center, a think tank focusing on violent extremism, urged caution against imagining that Afghan successes in eliminating several ISKP figureheads necessarily meant the group had been neutralized.

“IS Khorasan has cycled through so many tough leaders already that I have little faith that it is going to make lasting difference,” Clarke told Voice of America at the time. “Expecting that decapitation strikes targeting the leadership would have a strategic effect on the group is a mistake.”

United Nations estimates did, though, show that the ISKP grew less deadly in 2020.

“From 1 January to 31 December 2020, [United Nations Assistance Mission in Afghanistan, UNAMA] attributed 34 incidents causing 673 civilian casualties (213 killed and 460 injured) to [ISKP], representing a 45 percent decrease in comparison to 2019 and the lowest number of civilian casualties that UNAMA attributed to the group since 2015 when it first formally appeared in Afghanistan,” a UNAMA report published in February stated.

But John Godfrey, the acting U.S. special envoy for the global coalition to defeat ISIS, on July 1 cautioned against complacency, although the timeline he sees for ISKP regaining strength is far longer than that laid out by Russian security chiefs who insist the peril has already arrived.

“Regarding the ISIS-Khorasan branch in Afghanistan, it is a group that we have been focused on for some time,” he was cited as saying by Air Force Magazine. “I think that the assessment … by U.S. military leadership of the potential for that group to reconstitute capability within two years is consistent with what we’ve heard from other quarters of the U.S. government.”

Meanwhile, the countries alluded to by the Russian foreign minister have been largely mute in public about the Islamic State, as well as the Taliban for that matter.

Turkmenistan does not speak about such topics as a matter of course.

Tajikistan intermittently alludes vaguely to the dangers posed by the Islamic State, but often only as a cudgel with which to further repress its own effectively inexistent internal opposition. Security was high on the agenda when a Tajik government delegation traveled to Washington on July 1 for the U.S.-Tajikistan Annual Bilateral Consultations. No specifics were divulged in public statements, however.

Uzbekistan acknowledges the ascendancy of the Taliban and appears prepared to envision a power-sharing arrangement in Afghanistan that would include the group prominently. That much emerged from an interview granted last month by Uzbek Foreign Minister Abdulaziz Komilov to U.S. journalist Dennis Wholey.

“We must know about Afghanistan that there is no … military solution,” Komilov said in the English-language interview. “We think that this problem must be solved on the base of mutual compromise between the existing government and the military opposition, the Taliban and others.”

At this point, Washington looks entirely resigned to a scenario where the Taliban are jointly running the country. According to a Bloomberg report on July 2, the Biden administration has reached out to Kazakhstan, Tajikistan and Uzbekistan to ask if they would temporarily accommodate up to 9,000 Afghans who might face reprisals for working with U.S. military forces.

Washington also hopes to persuade Uzbekistan and Tajikistan to allow their territory to be used as a base for intelligence, surveillance and reconnaissance operations, presumably in Afghanistan, Bloomberg reported, citing unnamed sources.