Russia Frustrated By Refusal Of Uzbekistan, Turkmenistan To Cooperate On Security 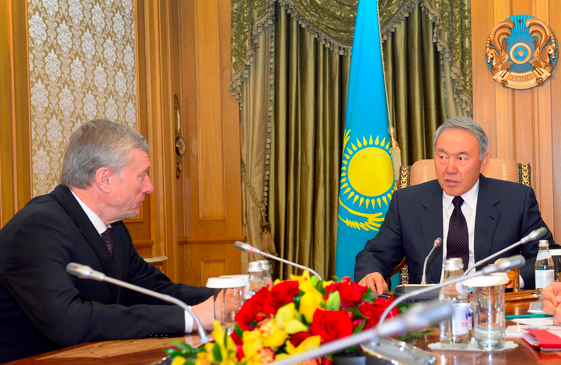 Russia is disappointed in the unwillingness of Uzbekistan and Turkmenistan to cooperate with its collective security bloc, and considers Iran to be a model those countries could follow, a senior Russian security official has said.

Uzbekistan quit the bloc, the Collective Security Treaty Organization, three years ago. Turkmenistan, avowedly neutral, has never been a member. (The other three ex-Soviet Central Asian states – Kazakhstan, Kyrgyzstan, and Tajikistan – all are, as are Armenia and Belarus.) But Russia continues to make overtures, said CSTO Secretary General Nikolay Bordyuzha.

“To my great disappointment, today we have practically no working relationship with either Uzbekistan or Turkmenistan, although from our side there have been repeated proposals to cooperate,” Bordyuzha said in an interview with Kazakhstani journalists. “We're not talking about the need to join the CSTO, about giving up their sovereignty. We're only talking about one thing: let's unite the efforts of the special services to jointly fight against common threats, which we're confronting today, let's talk about the possibility of offering aid from the CSTO collective forces in case it's needed. But there has been no response from either Uzbekistan or Turkmenistan.”

“Why not cooperate with an organization that contains respected governments: the Russian Federation, with its military potential and military-industrial complex, Kazakhstan, Tajikistan, Kyrgyzstan -- all countries which are always ready to provide help?” Bordyuzha continued. "To me, we simply have to cooperate, especially considering the processes going on in the world.”

Since gaining independence, Uzbekistan has tried to play off Russia against the United States, favoring one or the other at various times. While it currently is in the U.S. camp – for which they were recently rewarded with a generous supply of military armored vehicles – Russia seems to think they might switch back one of these days. For the most part, though, Uzbekistan seems to want to be as isolated as possible. Turkmenistan is even more isolationist, though there are signs it may be softening that stance.

In any case, the absence of those two countries is a real wrench in the works for Russia's and the CSTO's efforts in Central Asia, which now prioritize containing potential “spillover” of instability from Afghanistan. Uzbekistan and Turkmenistan both border Afghanistan, and the latter, in particular, has recently suffered instability on its Afghan border.

Particularly interesting were Bordyuzha's effusive comments about Iran, and how it could be a model for Uzbekistan and Turkmenistan: “Incidentally, it's an entirely different situation with Iran. With this government we cooperate actively, the Iranians participate in our operations, very effectively at that. Their results surpass those of all of our countries, because firstly they approach the work very conscientiously, secondly they still feel these problems more sharply, especially with respect to the illegal drug trade,” he said. “The Iranians aren't bringing up the issue of joining the CSTO or getting observer status. If they want -- we'll consider it. If they don't want -- we'll cooperate as we do now. Our relations with Iran are a model for many countries, including for Uzbekistan and Turkmenistan.”

By contrast, Bordyuzha, had nothing but good to say about Kazakhstan's contributions to the CSTO, and unequivocally endorsed incumbent president Nursultan Nazarbayev in snap elections this year. “For us, for the CSTO, that decision [by voters to reelect Nazarbayev] would mean stability and predictability,” Bordyuzha said. “Of course we can play at democracy as much as we want, but personally, I say let well enough alone. And for that reason, I repeat: I'm confident in the decision that the people of Kazakhstan will make.”