Russia Holds Military Exercises in Tajikistan -- But Why Not With CSTO? 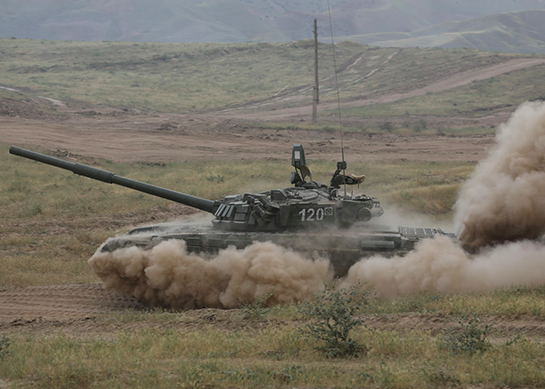 Russia and several of its allies, including Armenia, Belarus, and Kazakhstan, are conducting joint military exercises this week in Tajikistan. These sorts of exercises have become routine in recent years, but there is an intriguing difference this time.

These exercises are typically held under the aegis of the Collective Security Treaty Organization, which has been the primary focus of Russia's efforts to build military alliances in the post-Soviet space. But this exercise is instead being held under a different body: the Commonwealth of Independent States Anti-Terrorism Center.

The center has existed since 2000, but these are the first military exercises they've held. The countries taking part in the drills -- called Dushanbe-Anti-Terror-2017 -- are all CSTO members, and the scenario and format sound exactly like the typical recent CSTO exercises. "During the maneuvers, a combined force of ground forces supported by aircraft will hone their skills in combating terrorist groups, countering illegal armed units in mountainous areas along with peacekeeping operation elements,” Russian military spokesman Colonel Yaroslav Roshchupkin said.

So why this new/old organization instead of the CSTO? No one has publicly commented on why this CIS group is holding its first military exercises in 17 years, and none of the experts surveyed by The Bug Pit had any more information than has been publicly released.

But an intriguing thing about the CIS group: it includes Uzbekistan, which dropped out of the CSTO in 2012. That threw a big wrench into Russia's plans to make the CSTO the main body for coordinating security in Central Asia. As it stands, the CSTO includes only one of the three Central Asian states bordering Afghanistan: Tajikistan. (Turkmenistan is not in either group, and is avowedly neutral and so is not likely to join any such group any time soon.)

Uzbekistan isn't taking part in these military exercises, but it did take part in a staff exercise last month, also in Tajikistan, that was a sort of preparatory event. Uzbekistan soldiers in Tajikistan might be a bit sensitive, as it wasn't long ago that Uzbekistan's then-president Islam Karimov was threatening war with Tajikistan. But Karimov died last year and his successor, Shavkat Mirziyoyev, is trying to mend fences with Dushanbe. And the presence of Uzbekistan military officers in Dushanbe is certainly a sign of that.

Mirziyoyev also has been somewhat less hostile to Russia than Karimov had been, though prospects of close ties with Moscow remain dim. Russian Central Asian expert Arkady Dubnov related a telling post-Karimov exchange between the defense ministers of Russia and Uzbekistan:

The Russian minister tactfully hinted to his colleague: “Terror threats in Central Asia require Russia and Uzbekistan to unify their efforts. The situation near your border makes us think, once again, about how important it is to collaborate within the framework of the CTSO and the SCO [Shanghai Cooperation Organization].” The Uzbek minister responded just as diplomatically: “We are connected to Russia in many ways... The number of military collaborations is growing from year to year. In 2017, the number of collaborations is expected to double to 36. This is a very significant number.”

Anyway, all this is speculation and may have nothing to do with why the CIS Anti-Terrorism Center is holding its first military exercise. But Russia's apparent expansion of this group's mandate does make one wonder.

Another novelty of these exercises: Russia is deploying some of its advanced ballistic missiles, Iskander Ms, to the drills. It's the first time it's sent the missiles so far for an exercise, in what seems to be a show of force in Central Asia.

The Iskander-M is a big system, launched off a truck, so airlifting it to Tajikistan is no small feat. Russia has deployed the missiles to Syria, and provided some to Armenia, but this is the first time they've been used in an exercise abroad like this.

The deployment should be seen primarily as a public demonstration of Russia's ability to airlift weapons like the Iskanders into Central Asia, said Michael Kofman, a fellow specializing in Russian military affairs at the Wilson Center. “They took them there to show everyone that they can bring certain assets into the region,” Kofman told The Bug Pit.

It's a bit of a curious show of force, as Central Asia has diminished somewhat over the past few years as a site of military competition. But it recalls the dramatic launching of cruise missiles from ships on the Caspian Sea into Syria in 2015, a sort of reminder that Moscow is still the dominant military power in the region. Now, wonder what Mirziyoyev thinks of it...