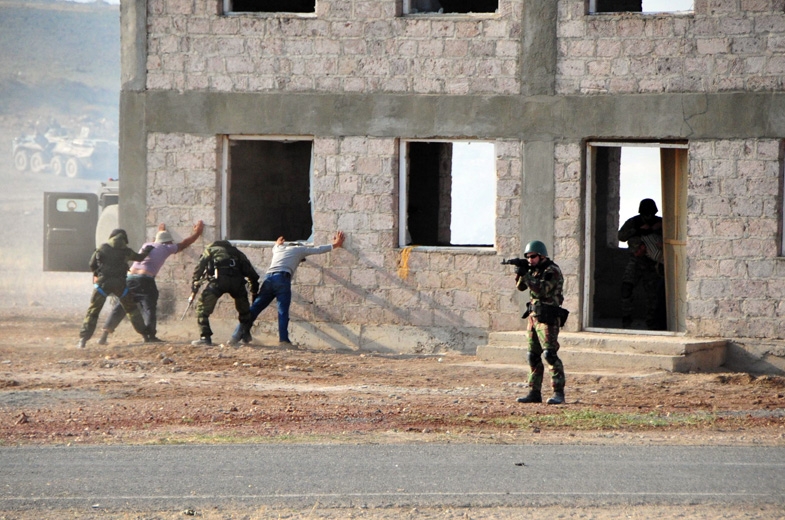 Troops from Kazakhstan take part in a CSTO military exercise in Belarus in 2015. (photo: MoD Kazakhstan)

Russia is in talks with Kazakhstan and Kyrgyzstan about sending troops to Syria, senior Russian and Turkish official have said.

"Negotiations are now going on, a process is being worked out so that Russian military police can contribute to providing security in Syria, and proposals to our colleagues in Kazakhstan and Kyrgyzstan are being worked out as well," said Vladimir Shamanov, the head of the Russian Duma's committee on defense, in an interview with RIA Novosti. Shamanov was confirming a similar statement made by Ibrahim Kalın, spokesman for Turkish President Recep Tayyıp Erdoğan, on June 22; Turkey, Iran, the United States, and Jordan also would reportedly be part of this operation.

"We will probably be most prominent in the Idlib region with the Russians; mostly Russia and Iran around Damascus, and a mechanism involving the Americans and Jordan in the south in the Deraa region is being worked on," Kalin said, according to Reuters.

Russia has occasionally mooted the idea of sending a multinational force to Syria under the aegis of the Collective Security Treaty Organization, which includes Kazakhstan and Kyrgyzstan as well as Armenia, Belarus, and Tajikistan. But more often, Russian/CSTO officials have discussed the issue in the negative, responding to questions about the possibility of CSTO troops being sent to Syria by denying that was under discussion.

Shamanov didn't provide any details about the Kazakhstan/Kyrgyzstan talks, but he didn't mention the CSTO so it seems the proposal is for an ad hoc coalition. If that's the case, it would point to a further sidelining of the CSTO in Russia's security strategy.

But more important is how Kazakhstan and Kyrgyzstan themselves will react. There has been, tellingly, no news out of Central Asia about this. Erica Marat, an expert on Central Asian militaries at the College of International Security Affairs at the National Defense University in Washington, said she expects Astana and Bishkek to go along in the end. "A mix of coercion and money will do its job," she tweeted.

Because the militaries in both countries tend to be pro-Russian, anti-Western, and eager for real experience, they'll likely want to take part, even if the broader public and government is less enthusiastic, Marat added. "I foresee a huge buy in among [military] leadership in both countries, political indecision, Russian coercion to participate and public discontent," she said.

Recall that in 2011 Kazakhstan said that it would send troops to the U.S.-led mission in Afghanistan, only to back out after some mysterious terror attacks in the country and protests by Kazakh veterans of the Soviet-Afghan war. Kazakhstan had small contingents of troops in Iraq from 2003-8; Kyrgyzstan has never deployed its military abroad.