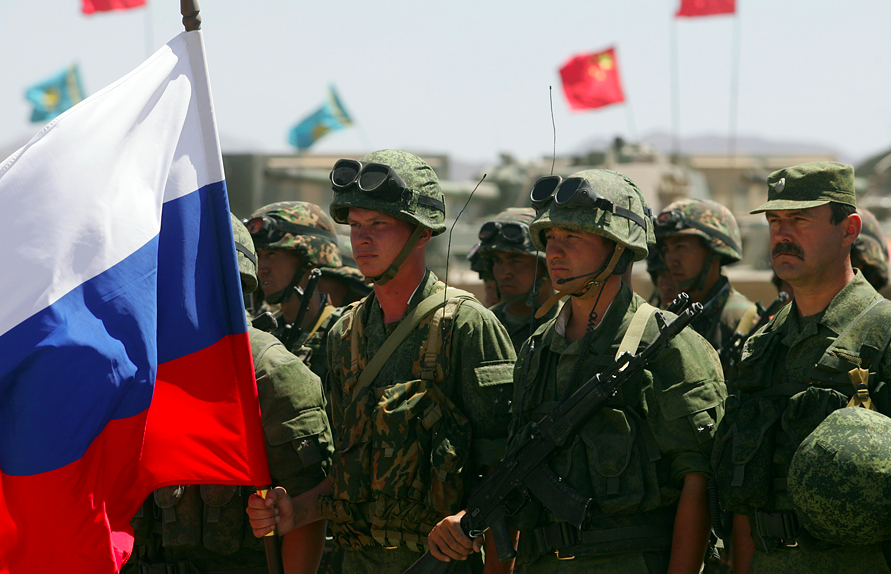 Over the last few years, two large multilateral security organizations that have emerged in Central Asia: the Shanghai Cooperation Organization (SCO), dominated by China, and the Collective Security Treaty Organization (CSTO), dominated by Russia. For the most part, these two groups have looked past one another, staking out complementary, rather than competing, mandates, and including many of the same members (Russia, Kazakhstan, Kyrgyzstan and Tajikistan all belong to both). But there is still under-the-surface competition between the two groups.

As the new International Crisis Group report, China's Central Asian Problem, notes, China's ambitious economic moves into Central Asia have not been matched by political or military efforts of the same scope. That's in part because the Russian influence in Central Asia's security structures remains so strong that China is reluctant to try to compete. The SCO, China's main tool for engaging in Central Asian security, has moved away from joint military training -- its 2012 exercise was the smallest since 2003 -- and more toward getting Central Asia to crack down on Uyghur exile groups. The CSTO, meanwhile, claims to be building up a joint military structure, including rapid reaction forces.

Russia is "increasingly distrustful" of the SCO, the ICG writes:

Russia continues to seek military influence in Central Asia but has become increasingly distrustful of the SCO and China’s intentions.Beijing is aware of this; a Chinese analyst noted: “Russia attempts to squeeze the SCO while supporting competing organisations”. The Collective Security Treaty Organisation (CSTO) is Russia’s preferred regional military organisation, and the Kremlin sells arms to Central Asian governments through it at preferential tariffs. Moscow holds a near monopoly on arms sales to the region since the collapse of the Soviet Union and is likely to retain it for many years.

Russia uses the SCO to try to get multilateral support for its foreign policy when it can get Chinese support, and to thwart Beijing when it can't:

Russian-Chinese rivalry is also a key factor. Moscow uses the SCO as a forum to “bolster criticism of the West and NATO on issues like Syria and missile defence”.But it also takes any opportunity to thwart proposals that would extend Beijing’s regional reach.

Relations between the Russian-led CSTO and the Chinese-led SCO remain uncertain and potentially competitive. Though the organizations are said to coordinate at the Secretariat level, they have not reached a clear division of labor, nor have they followed through on earlier announcements to implement joint programs. The higher global profile and prestige of the SCO as a regional security organization clearly frustrate Russian policymakers, who argue that the CSTO is more advanced in its institutional functions and operational capacity than the Beijing-based organization.... With such differences in prestige, the organizations risk getting drawn into "covert and dangerous competition," at least from Moscow's perspective...

Yet, bound by their SCO membership and the rhetoric of strategic partnership, Russian officials have rarely voiced concerns about China's ascendancy in public. As Stephen Kotkin of Princeton University has suggested, by acquiescing to China's rise in Central Asia in its attempt to balance against Western influence, Russia has sanctioned China's newly elevated regional role and now even risks becoming Beijing's "junior partner." Consistent with Kotkin's observation, it has become a standard script for Chinese officials, from Beijing to Dushanbe, to preface their comments about Central Asia by underscoring that the region remains "Russia's special zone of influence." But rhetorical flourishes aside, in practice Beijing rarely has made any compromises to its security or economic agenda to curry favor with Moscow.

However, the SCO and CSTO do have something important in common: a failure thus far to prove that they can act in a crisis situation: "The CSTO and the SCO were conspicuously inactive during the 2010 coup and pogroms in Kyrgyzstan," the ICG writes, noting that the same was true in last summer's fighting in Tajikistan.

The real test would seem to await when (if) that is no longer the case, when either China or Russia is able and willing to intervene militarily in Central Asia. As Russia's power wanes, China may take up that role, the ICG concludes:

China has unambiguously ruled out any sort of military intervention in its uneasy Central Asia neighbourhood, even in a case of extreme unrest. In the coming years, however, events may force its leadership to make difficult decisions. It will almost surely need to use at least more active diplomatic and economic engagement to grapple with challenges that pose threats to its economic interests and regional stability.